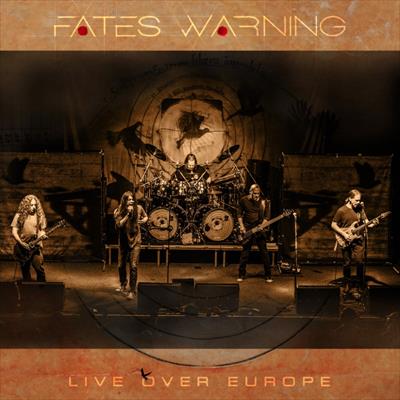 Fates Warning could arguably be classed as veterans of the melodic prog metal scene. This double live collection, their first ever, could well be their definitive document.

Ah – the double live album. In the old days, the gatefold sleeve, FOUR sides of music from the live setting (often ‘tidied up’ to avoid the occasional bum note or off key moment) was always something to behold. The list of classic double lives is as long as the arm of a very long armed person. We all have our favourites yet still you can’t beat the thrill of a live recording.

These days, most of the big bands issue live albums at the drop of a hat – souvenirs of the most recent tour so their appearance becomes less of an event any more. Has the thrill gone? Does the live document still hold the same appeal and offer a band a career landmark? Hold the thought – here’s a release that actually does stand up to the test.

American prog metal pioneers, Fates Warning have managed to resist the temptation and finally issued a live album that defines the genre. Recorded on their January 2018 tour of Europe on their Theories Of Flight album tour (we reviewed the album here), it gathers a massive 138 minutes of tracks recorded at different venues to provide a pet overview of Fates Warning (hip hip hooray for the double CD format). Anyone who’s read Slash’ autobiography will recall his starting point for getting into a band was to ‘acquire’ their live album and work from there. Good advice, but maybe pay for the album rather than nick it from Tower Records like Slash used to do.

The pairing of Ray Alder and Jim Matheos lead the band in an (almost) exhaustive journey through the best of their career that selects from themajority of their dozen albums including a healthy portion of their most recent Theories Of Flight material. From the heavier AOR leanings with Pale Fire and Seven Stars to the more epic and ambitious arrangements and shifting from the driving – it could almost be Metallica – thrash of Acquiescence to the brief and simple acoustic interlude of Falling that segues perfectly into Pt IX of A Pleasant Shade Of Gray. All bases are covered and it’s hard to find fault across the playing time.

Jens Bogren again makes sure that the recording packs one hell of an oomph. Pieces of Me and Firefly are a potent combo that establish the band’s metal credentials yet the centrepiece of the set comes in the form of two extended numbers. And Yet It Moves and Still Remains form almost half an hour and allow the band to show their instrumental prowess.

While some of their peers tread water (no names mentioned) and others take a break from the limelight, here’s a chance to grab by the scruff of the neck, a landmark live release that should fire Fates Warning into the upper echelons of the melodic prog metal field.

You can find the Fates Warning website here: https://fateswarning.com/