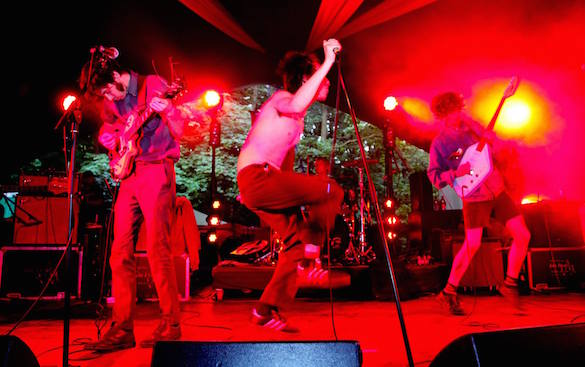 Can Fat White Family live up to the hype away from the capital? Sean Diamond reckons they can.

The queue says it all. One of the most hotly anticipated bands in recent times, there seems to be a real buzz surrounding Fat White Family; they are one of the few new bands whose debut album I have felt compelled to buy without having really heard any of their songs, bar a couple of numbers. I still haven’t got round to playing it yet.

Of course, being a battle hardened reader of the music press means that I am naturally suspicious of all these hype bands and artists, having been hoodwinked into listening to countless ‘next big thing’ chancers over the years (Terris and Campag Velocet spring wincingly to mind), so I am going in with my guard (and defences) very much up. A quick glance around the vast hordes waiting to get in reveals an interesting mix of young indie kids and second generation music fans, ranging from teenage to middle aged to older. You instantly get the feeling that it’s going to be one of those nights where literally anything could happen ….

I was under the assumption that openers The Wytches were a psych-folk outfit from New Brighton. Turns out they are a hairy, shouty three-piece from Peterborough specialising in discordant, primal grunge-blues-shoegaze howling, straight from one of Kurt Cobain’s worst nightmares. Not quite what I was expecting then, but an agreeably uncomfortable prelude to the night’s festivities, with just the right balance of dread, darkness and angst to get you prepared for what is to follow. A little repetitive after a while, their music doesn’t quite hold your attention in the way a truly great rock ‘n’ roll band should but they deserve a mention for their lack of compromise and admirable levels of don’t-give-a-fuckness (yes, there is such a thing). Moving on ….

Next up are The Growlers, from the good ol’ US of A, here to brighten things up a smidgen with their jolly brand of surf-pop. Opening with a bizarre number reminiscent of Theme From Rawhide, the band are in possession of the cheeriest, smiliest lead singer I have ever seen in my life! A curly haired bundle of joy, the perma-etched smile on his face never creases, not once, not even when he’s singing about Junkie Friends and whatnot. Quite extraordinary! Although clearly adored by the vast majority of the audience (some of the screams they receive after each song are deafening), they failed to really move me in any way. I found the incessant cheeriness a little tiresome after a while, plus the aforementioned frontman’s singing voice is best described as an acquired taste. They do, however, provoke the evening’s first bit of crowdsurfing at the end of their set, playing a rapturously received song which I think I may have heard before; not a bad tune, but distinctly unmemorable. Much like their entire output, come to think of it. And there was me expecting a psychedelic transvestite outfit (I am pretty certain I read this description somewhere!). Once again, I was misinformed.

Over to the Fat Whites then. As soon as they launch into Auto Neutron, a majestically depraved number reminiscent of Simple Minds playing Nights In White Satin at a garden party hosted by Satan, the smell of barbecued human flesh lingering in the putrid air, you know this is going to be far more than a standard ‘gig’. Bare chested, swigging from a bottle, muttering something about spotting a “fat white man” either in the crowd or earlier on in the day (it’s unclear), one glance at frontman Lias Saoudi instantly puts waste to any false preconceptions of poseurs you may have been half expecting; these guys are the real deal, no doubt about it.

Standing just above the steps of The Kazimier meant that I had a pretty much perfect view of the entire audience down the front, I don’t think I have ever seen so much crowd surfing and stage diving in my life! Certainly not for a long time anyway. Lias does a fair bit of it himself, gliding through the sweaty throng effortlessly, with all the ease of a swan on water or a pig in shit. The music is very much their own; an intoxicatingly sleazy, macabre S&M drone, the appalling likes of Cream Of The Young worming their way into your entrails with all the subtlety of a snapping turtle down the trousers, a sick mutant sludge which you know is wrong but still can’t help feeling so, so fucking right.

It says it all when their most conventional, accessible track is called Touch The Leather, a riotously catchy whip crack of a single, Zappa’s Penguin In Bondage rewritten for daytime radio. After barely an hour’s time the band are gone, no encore, just a stagnant sense of mystery and confusion filling the venue like an open sore. For once, DO believe the hype, Fat White Family ARE every bit as good as the reviews are telling you; I entered a cynic, came out a convert. Must get round to playing the album ….