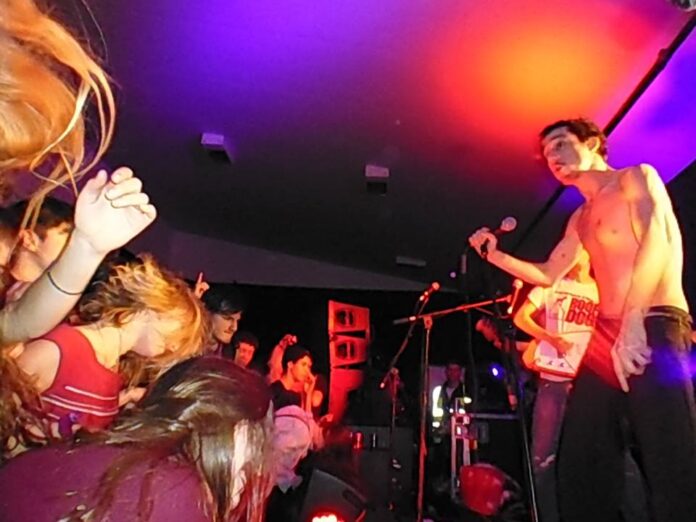 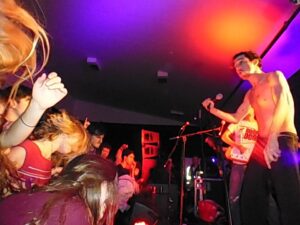 Keith Goldhangar is convinced that Fat White Family are going to be one of the biggest bands of the year. He’s reached this conclusion having chased them around London for most of the last week, culminating in a show at Shapes. Both photos © Geert $ Oliver.

Heading out for a Saturday night at “Shapes” sounds like the sort of thing that you’d be more likely to expect to hear further east than this.

“Shapes” in this case is the catchy name for a warehouse shell on the perimeter of London’s Olympic park, surrounded by other unidentified units amongst a maze of car free roads. This event is the kind of thing you read about and imagine it’s typical of what goes on rather a lot around here.

It probably does and it probably sounds cool, trendy and an alternative to queuing for half an hour to be allowed entrance into one of those late night Shoreditch basements with ultra cool DJ’s and little trays the bar staff hand you containing the five pence change you may be getting back from the beer you’ve just bought.

In reality, we’re standing in a cold dark room gasping in horror as we discover that £4.30 isn’t even for a regular can of beer, but for one of those small tinnies we gulp down in two mouthfuls.

Cutting-edge, cool and trendy it might look like on paper, but in reality it’s a miserable experience and we’re just hoping it’ll all be one last worthwhile experience before bedtime.

At the time of writing there cannot be a band more worthy of waiting hours in our (hip flask holding) overcoats for, or that fortunately warrant this attention. Four days ago FAT WHITE FAMILY played in a more established London venue to a packed out crowd and one day earlier they turned up unannounced at a small pub in Brixton before arriving tonight after an announcement only a couple of days ago that this was happening.

We turned up in droves and paid a tenner to watch what must be the greatest band we have in the UK at the moment.
Something we hear said more than once tonight.

Everyone will have an opinion about the FAT WHITE FAMILY this time next year. There’ll be the people who will berate some of us for climbing on some fabricated bandwagon and will wait until they’re on the telly or something before forming an opinion that will be the opposite to those of us lucky to have witnessed this glorious mess of a band already. However, in years to come one can already feel that this lot, in some form or another will be a name that won’t need much of an explanation when inserting them in a sentence amongst some of the other greats we already know, listen to still and reminisce about during those quieter moments in our busy lives. 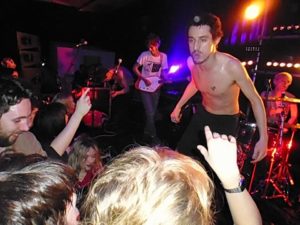 FAT WHITE FAMILY’s current repertoire of songs we hear tonight (or more accurately, this morning) will eventually be part of everyone’s lives. These are all growers as they say, tunes we hear and want to hear again and again until we can sing along, like some here already are. Louder Than War had “Champaign Holocaust”, their debut album at number 82 in our albums of the year last year. A very modest position, tucked away amongst many greats, but an album we’ll look back on in time to come as a collection of tunes that hopefully will be looked upon in the future as just the beginning of another great band the world will hear and place alongside, well … let’s make a quick list shall we? … The Libertines, The Pogues, The Fall, The Cramps, Iggy, Rollins, The Butthole Surfers. I’ll stop there. You can hear all influential snippets of these bands during the show this evening. We get the highs (“Is it raining in your mouth”) the sombre (“Cream of the young”) and the pure crazy (“Special Ape”) as well as lyrics we’re still trying to decipher and recognise that this pastime too will take a few more months to grasp hold of.

And grasp hold of we will.

“I am Mark E Smith, I’ve even got the paperwork to prove it” !

Just imagine that in months, maybe years to come, this is what the kids will be riding around on their bikes singing at the top of their voices. It’s The Fall’s’ “Spartacus moment” that The Fall, other than merely existing, have nothing to do with.

Visually we see a front man Lias Saudi, looking slightly scary but also looking like a frontman with the credentials to become one of the greats. He’s bare chested by the fourth song and manages to keep his non-waistbanded jeans above his arse tonight (Something he failed to achieve four days previously).

The five boys alongside him, four of which share the work of the vocals, stagger around, fall over, sit down, lie down, shout at the soundman, and dodge their flying frontman as he is unceremoniously thrown back  from the audience at twice the force at which he left the stage.

An enthusiastic crowd have turned this place from a shivering room into a mid winter festival field with a roof on. People are perched on each other’s shoulders, arms in the air, and scores of people are already singing along to these soon to well-known tunes.

There’s not many things i’d find acceptable to be doing on a Saturday night that involves keeping my coat on, having a sneaky sip from a smuggled in hip flask (that’s me banned from further events then…) whilst standing alongside people drinking (and in many cases, not drinking) small cans of very expensive beer, but this band have made it very worthwhile.
There’ll be more about this lot to come …

Words by Keith Goldhanger and both photos © Geert $ Oliver. More writing by Keith on Louder Than War can be found here.