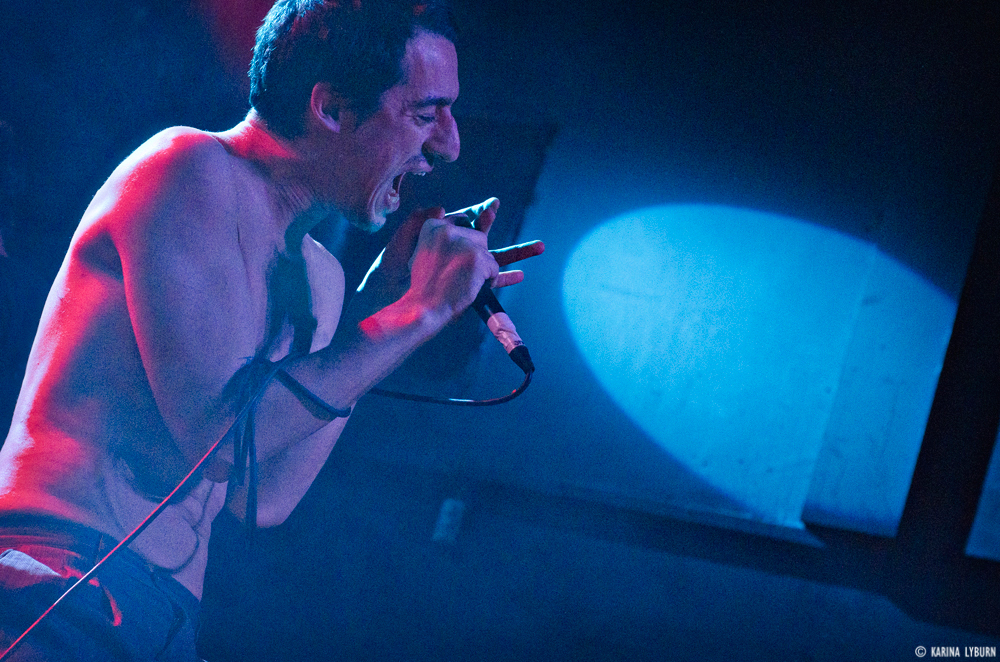 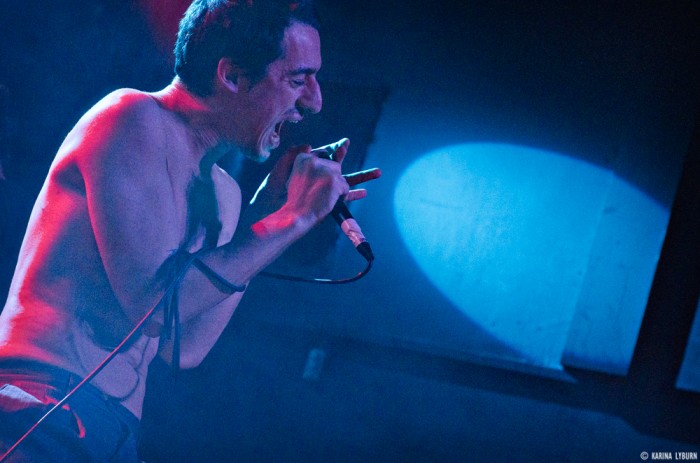 Against a backdrop of inter-band tension, recent drug rehab and the release of a filthily fantastic second LP, Fat White Family are out on a UK tour. Louder Than War’s Stephen Murphy went along to their recent Rescue Rooms gig in Nottingham, to witness the most exciting, chaotic group in the UK.

Last year’s video for Whitest Boy on the Beach was both an audiovisual joy, and to be honest, a bit of a fucking worrisome horror show. Whilst the video showed that in a creative sense, Fat White Family are running on all cylinders, the sight of guitarist Saul Adamczewski looking painfully thin, and pale as curdled milk – didn’t just ask a question, it pleaded, shouted and screamed one – how long could the band go on for without imploding, or its members expiring?

A recent Guardian interview with Saul and Fat White’s front man Lias Saoudi, only confirmed growing fears that pharmaceutical excess and inter-personnel tensions were threatening the continued existence of the group, but with Saul having undertaken drug rehab in Mexico and Vegas, and a well received second album to take on the road (the frighteningly good, Songs for our Mothers), the show, as they say, must go on!

Tonight’s support act – I, Ludicrous – are the very definition of a cult band’s cult band. Having been releasing music and sporadically touring since the mid 1980s, the sprightly trio are a testament to the fact that hair loss, expanding waist lines and creaking joints are not a bar to being massively entertaining purveyors of lo-fi indie-pop. 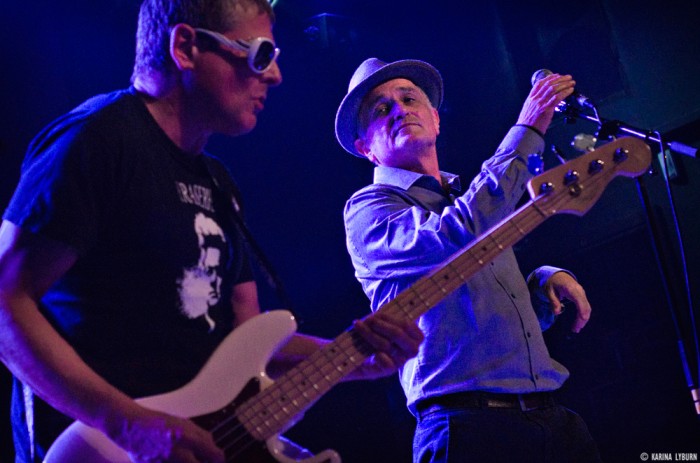 Like a slightly less daft Half Man, Half Biscuit, I, Ludicrous’s stock-in-trade are humorous tales about the existential dullness of daily life. Songs like We’re the Support Band, and Very Important Meeting sum up the pain of wanting to be proper fucking famous rock stars, but having to carry on with the grind of the nine-to-five working week. They also rather shamelessly beat Fat White Family to the punch when it comes to songs about the grumpy leader of The Fall group, with the million-miles-a-minute thrum of I’ve Never Been Hit by Mark E Smith.

Sad, funny and rather brilliantly tuneful, I, Ludicrous are reminder that you should never give up, and that there’s always some mental bastard who’s going to appreciate what you do – as wonderfully personified by an animated Fat White’s Lias Saoudi, gesticulating like a nutter in front of the stage throughout the group’s set.

The sense of anticipation for tonight’s headliners is palpable, and before even an instrument has been picked up and a note played, the area in front of the Rescue Rooms crowd control barrier is a boisterously writhing, sweat ridden sea of humanity, the like of which I’ve not seen at a gig for a long, long time. This is nothing though, compared to what happens when Fat White Family launch into Tinfoil Deathstar. 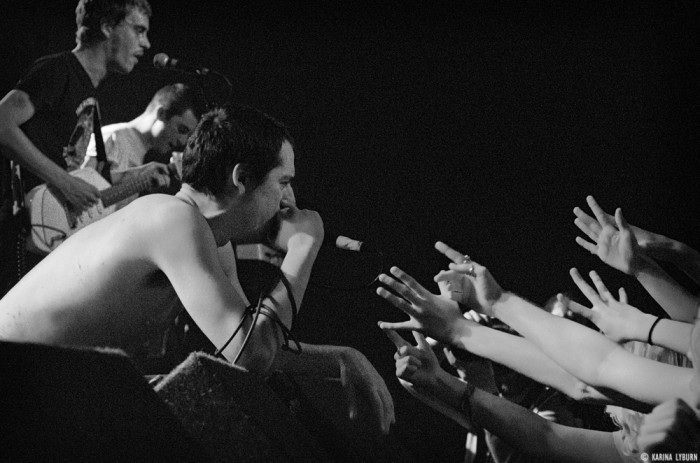 Like an erupting mentalist volcano, bodies are crushed together at a molecular level, beer is thrown, and Lias Saoudi launches himself into the churning crowd like a shit Tom Daley – whilst behind him, the rest of the band play like possessed men, dredging up a tune from the very depths of hell itself. All-in-all, it’s perhaps the most jaw-dropping opening to a show my eyes (and ears) have ever witnessed.

Things continue apace, as the psychedelic prog sludge of Auto Neutron envelops the Rescue Rooms in layers of paralysing, acid-flashback noise. The sense of woozy inertia is smashed in the chops though by the vicious one-two punch of a funked-up Whitest Boy on the Beach, and the tale of oral love – Is It Raining in Your Mouth? – both of which gives the mosh pit masses even more of an excuse (if any were needed) to try and inflict internal bleeding on themselves and those around them. 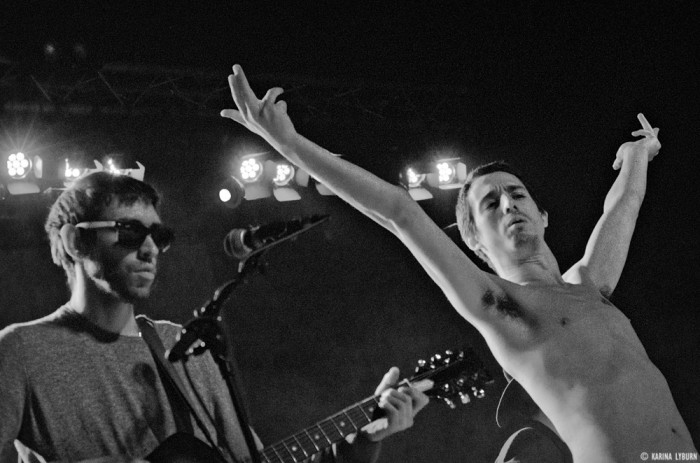 With so much top-notchery on offer, trying to decide on a favourite song of the evening is rather like a parent being forced to say which of their children they love the most. if pushed though, it would have to be a toss up between I am Mark E Smith – rather improbably, the second Fall singer tribute song of the night; the (possibly) DFS inspired Touch the Leather – a song so deliciously sleazy, that you feel a compulsion to shower vigorously after hearing it; and the shambling C&W slow dance/hate filled classic that is Garden of the Numb – a song that borders on being actually evil in the Catholic Church sense of the word (sample lyric-“You sycophantic weasel-minded whores, you would sell your mother’s cunt to open doors”).

As for the band themselves, they all look to be in pretty fine fettle, with guitarist Saul Adamczewski in-particular looking a (comparative) picture of health. It’s a heart warming thing to see, because whilst the late Bill Hicks’s notion about ‘authentic’ rock stars is still pretty funny and rings true in an abstract sort of way (Hicks had a skit that basically said proper musicians should be crazed drug hoovers, who are prepared to lay down their lives in the service of music, and includes classic line “…I want my children to listen to people who fuckin’ ROCKED! I don’t care if they died in a puddle of their own VOMIT, I WANT SOMEONE WHO PLAYS FROM HIS FUCKIN’ HEART! “Mommy! Mommy! The man Bill told me to listen to has a blood bubble on his nose” SHUT UP AND LISTEN TO HIM PLAY…”), the reality is that no one really wants to see young talents snuffed out because they’ve gone a bit overboard with drugzzz. Remember kids, just say maybe, and only in moderation… 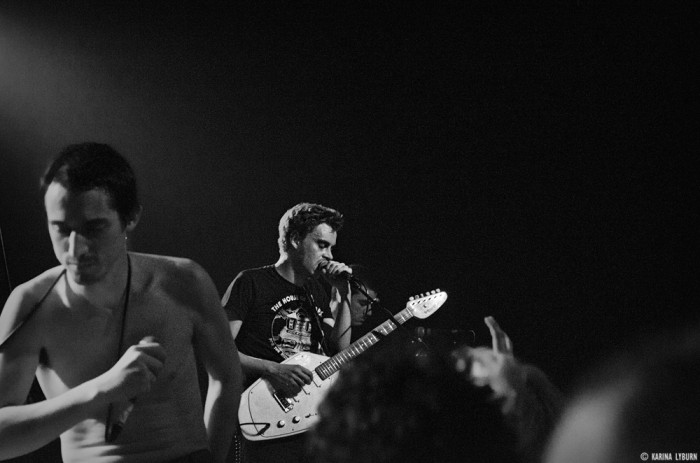 Whilst Saul Adamczewski looks like a new fella, it appears there are still tensions aplenty within the group. As the band prepare to play the last song of the night, a tussle between Saul and keyboardist Nathan Saoudi somehow renders the Rescue Rooms PA system mute. The mad scramble to remedy the situation results in half the group to leaving the stage in a Tap-esque diva-strop, whilst the other half limp gamely on – ably assisted by a brave stage invader on cymbal duties. It’s a strange, sudden, shambolic end to one of the best gigs of the last few years, but oddly, it’s perhaps the only way tonight could conceivably have ended.