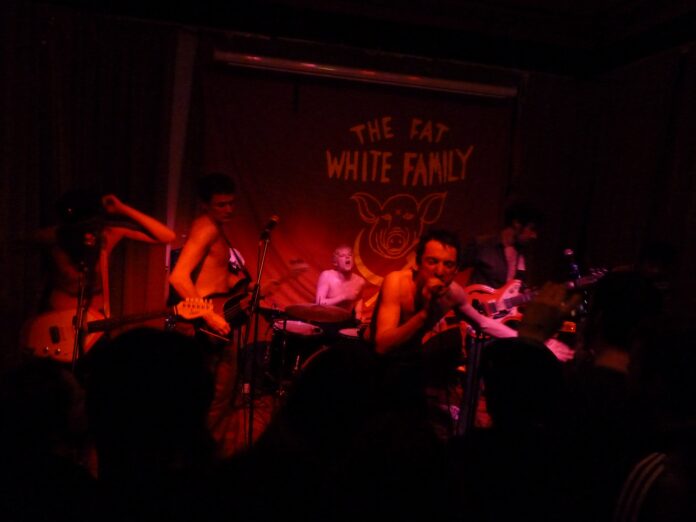 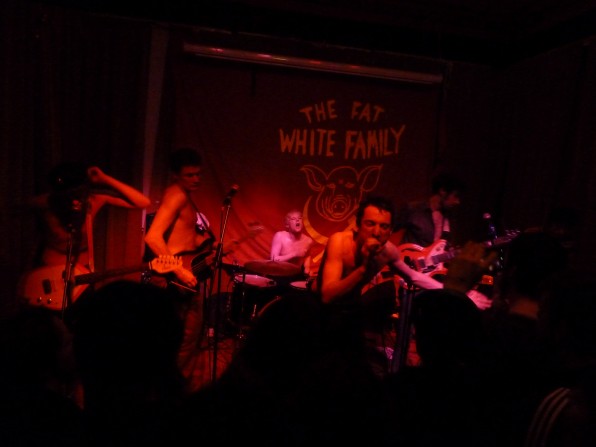 Louder Than War’s Alex Staszko heads to down to one of Manchester’s most spit’n’sawdust venues, Gulliver’s, to check out the Fat White Family.

You can tell a gig will be good when one of your friends on Facebook claims to have been kidnapped by the band after their previous nights gig in Sheffield. There are all sorts of messy rumours about that gig which thankfully didn’t repeat in Manchester. Indeed mainman Adrian from The Eccentronic Research Council (new LP available now peeps!) turns up (thus proving the old Manchester adage, you’re never more than 100 yards from an ex-member of The Fall), looking fine after his ordeal, along with his erstwhile bandmate Maxine Peake. Guy Garvey could also be seen propping up the bar beforehand.

I first heard Fat White Family on 6 music’s’ Roundtable, “Touch The Leather” was on; I thought it was brilliant; the Muppets in the studio hated it. So apparently the band are mental, after meeting one of them at the merch stall where they were giving away fanzines and selling a split EP, on 10” vinyl for the vinyl junkies, I can say this doesn’t appear to be true, then again there are the tales of the previous nights gig in Sheffield.

So, on to the support acts, I’ve seen The Bell Peppers before, but they look different, it seems they have a new drummer who’s only had the one rehearsal, and it’s great fun watching the other two band members play off him. Their great 60’s twangy guitar sound is reminiscent of Hank Marvin and after a short 25 minutes their well received set is over.

Phobophobes are a somewhat better than the Doors take on 60’s psyche, worth seeing again I think.

The 6 piece Fat White Family drift onto the stage and set up slowly, trying to hear their instruments through the monitors, and faffed around for a while trying to get it right. Their opening number ‘Auto Neutron’ is a fantastic bass driven dirge with a dirty 60’s organ sound. They look like The Clash all stood in line at the front of the stage. The next batch of songs are more shouty classic punk anthems that fit in more with their image. After a couple of numbers all the band are shirtless save for the keyboard player who’s still in a jumper. It’s certainly hot in Gullivers with a fair few moshing down the front; God knows how the keyboard player manages it. Singer Lias Saudi dives in the crowd a few times and joins the audience who receive him warmly. Most of the set is fairly punky, but their best stuff is different, ‘Without concern’ sounds more rockabilly but with organ on top, ‘I am Mark E Smith’ which has more 60’s cheesy organ really impresses. There’s a thrashy Fall like track and even a couple of ballads (remember them) thrown in that don’t really work for me. Standout track is ‘Touch The Leather’ (don’t watch the video with anyone sensitive in the room) even though it fell apart a little at the end. After a very long set for a new band (almost 70 minutes) they finish up on something a bit thrashier. Overall they look the part but sound better when they’re being a 60’s garage band, but I’d definitely catch them again.

Words and pictures by Alex Staszko. You can find his Louder Than War author’s archive here.