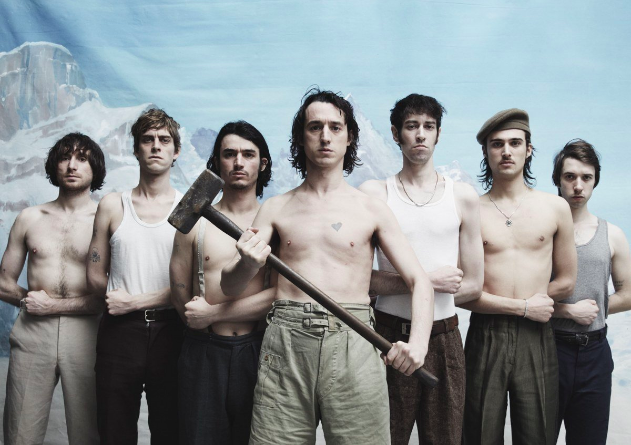 Fat White Family return to Manchester in support of their new album Serfs Up! They play a riotous set filled with songs both old and new. Rhys Delany was there.

In typical Fat White fashion, there is a new rhythm section now featuring, Samuel Toms (formally of Temples) on drums, and Adam Brennan (Meatraffle/Scud FM) on bass. The newly added Alex White plays a myriad of instruments, most notably donning his sax. The ever-consistent background character Adam Harmer stands understated to the side of the stage. A very miserable looking Saul Adamcweski mopes around. Then finally we have the brothers Saoudi with the younger Nathan on synths and the siren-esque Lias playing frontman.

The band have taken to a newer style. Gone are the days of faecal stage antics and heroin physique. The lack of [hard] drugs has taken the band in a more accessible direction musically and visually. A freshly shaven, monk-like Lias should perhaps take the dietary advice of John Cooper Clarke when he says, ‘Get Back on Drugs you Fat Fuck’.

With 10 new songs to add into an already impressive setlist, I was eager to hear how the vast change in sound would mix in a live environment. The band open with new single, When I Leave as opposed to the previous Auto Neutron, both songs possess an eerie creepiness to them, making for a comfortable transition into new territory.

This does not mean the group hold out on delving into their now three album deep back catalogue. The next song is the crack inspired Tinfoil Deathstar, with its pulsing bassline, which gets the crowd gyrating. To finally summarise the Fat White sound, the doom heavy I Am Mark E Smith, powers its way through the venue. The first three songs have already set an atmosphere of anticipation

The poetically written, homoerotic Goodbye Goebbels makes an appearance, with Adamcweski taking centre stage, for what can be considered a solo piece. It calms the riotous crowd who echo each solemn line back to the endearing group. This is then followed by the newest Fat White homo-ballad, into the sleazy Bobby’s Boyfriend. Lias picks up a surprise gong as he bellows, ‘Bobby’s Boyfriend is a prostitute’, along with the crowd who seem subservient to any form of lyrical eroticism.

Older songs such as Hits Hits Hits, Whitest Boy on The Beach and Heaven on Earth creep their way back into this newer pop style. All praise going to Alex White’s saxophone/synths/clave block that seems to tie together the seedy sound. Adamcweski introduces Cream of The Young as being a ‘song about noncing’, so fear not, the shock-humour is still present.

Obviously, this grimy nature has been consistent throughout the Fat White Family career, but no song old or new quite hits that sexy feel of the opening notes to Touch The Leather. I watch from the upper balcony as the crowd erupts during the first chorus; hundreds of kindred spirits shouting along to ‘Me and my baby, gonna touch that leather!’ The energy is palpable, this is a band that has consistently been on the top of their form whether they had one album to their name or three.

A few new songs have been left off the setlist, the most obvious being album favourites Kim’s Sunsets and Tastes Good With The Money, although I put this down to an arrival fifteen minutes over schedule, and a late night Ritz disco forcing the band to a tight agenda. However the optimistic I Believe In Something Better is delivered eloquently. Arms are raised, praying for redemption, something more is to come.

Now, the last time I’d seen Fat White Family was on their ‘Tour of Discipline’, a two-date mini-tour in which they said they were going to maybe play something new, and shake off the rust in anticipation of a few festival dates. No new music was played, the band fell apart and the setlist had been rejigged. A noticeable omission was Bomb Disneyland. The band have caved in and brought it back as the set closer it deserves to be. The crowd beat each other and chant and scream all along with a band that is on their top performative form. The thirteen-song setlist leaves no room for an encore and I don’t think anyone can complain about tonight’s show.

Overall, they had a good balance of the old and the new. Going in I was worried as to how the live show would’ve changed given the drastic change in sound, but I’m glad to report everything went smoothly, in fact, they looked as though they may have actually enjoyed themselves… (Aside from Saul)

Fat White Family can be found on Twitter and Facebook, and their music can be purchased here.

All words by Rhys Delany. More of his writing can be found at his author’s archive.