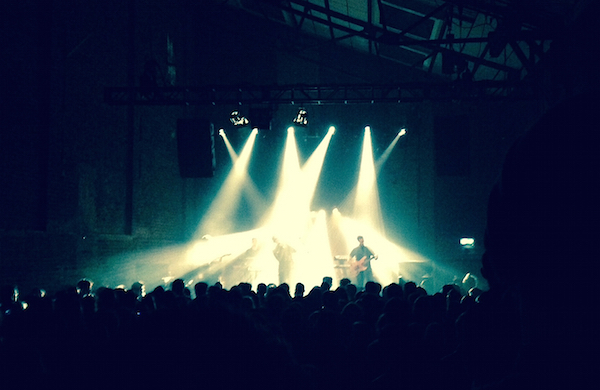 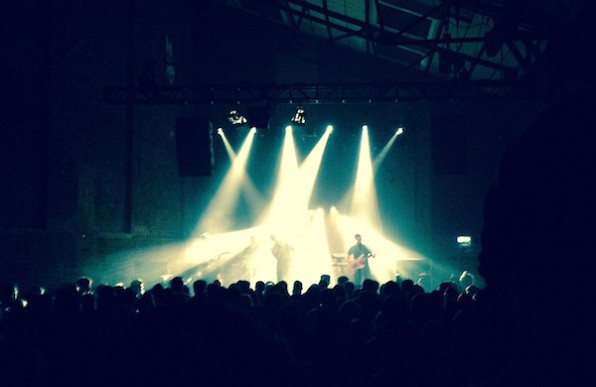 The inaugural PIAS Presents night took place in London on Monday as part of Independent Venue Week, a night featuring two Louder Than War favourites – the mighty Fat White Family and Ghostpoet. For Louder Than War, Ben Easton reports back.

As we all know, live music venues continue to pump the blood through the veins of the music industry and, this month, Independent Venue Week have shown how vital these venues are for artists and audiences alike. On Monday 26th, two of London’s best-kept secrets took to the stage at the Village Underground. Mercury nominee Ghostpoet and the hotly tipped, rock crazies The Fat White Family entertained the packed out Shoreditch venue and if there were any out there who needed converting to the independent live music circuit, this was the gig for them.

Ghostpoet, who’s new album ‘Shedding Skin’ is out on March 2nd via Play It Again Sam, debuted some brand new material as well as some “golden oldies”, as he put it, to an entranced London crowd. His impressive and well-received debut turns four this year and, unfortunately, he has not managed to break through to the higher echelons of success as his mercury nominated counterparts Metronomy, James Blake and Everything Everything. However, Ghostpoet still exercises his monotonous wordsmithery, mixing urban and rock influences as well as drawing upon the gloominess of everyday life. It’s not quite hip hop, it’s not quite pop. It just sits luxuriantly in the middle. In one of his new tracks, ‘X marks the spot’ he repeats the line “I don’t care anymore” and this refusal of the trivial working week seems to sit well with the hypnotised, Monday night crowd.

After focusing the majority of his set on newer, more guitar lead material, he slams into arguably his most well known track “Cash and Carry Me Home” giving everyone a taste of what his debut “Peanut Butter Blues & Melancholy Jam” was all about: captivating minimal beats lined with bass drones underneath some beautifully relatable poetry. Although Ghostpoet hasn’t managed to keep to the heights that his first record brought, this new record sounds moody and inviting and definitely one to watch out for. Tracks like “That Ring Down The Drain Kind of Feeling” and “The Pleasure In Pleather” one again show his ability to mould words as well as put on an impressive and compelling live show. 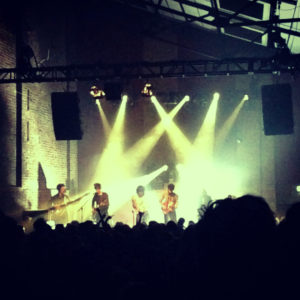 The headliners of the night were, of course, The Fat White Family. Much has been said about this collective over the last few years and, having never seen them live before, I was half expecting them to be a touch shambolic. But what do I know. Even before their gear was set up, the hypnotised crowd for Ghostpoet had been riled up into a frenzied mob baying for metaphorical and literal blood. When the Fat White Family eventually began the wall of sound that was “Auto Neutron”, it was clear to see that this was a movement that had been boiling in the underbelly of the music scene for a long time and is now ready to explode. As the speakers were on the brink of being blown and fingers were placed firmly in the more sensitive ears of the crowd, they blasted into “Is It Raining In Your Mouth?” and for a few minutes it was like 1977 all over again. No iPhones, no twerking, no selfies. Just a group of heads bobbing up and down to Lias Saoudi’s mesmerising front man performance.

The Fat White Family have clearly altered the scrappily recorded tracks from their debut “Champagne Holocaust” and transformed them into psychedelic powerhouses and tightened their live set into a slick and sweaty rock n roll triumph. Both thoroughly impressive and thoroughly mental!

Look out this week for more shows all across the UK as part of Independent Venue Week!

Fat White Family are on Facebook, they tweet as @FatWhiteFamily and can be heard at their Bandcamp.

All words by Ben Easton. More writing by Ben on Louder Than War can be found at his author’s archive.