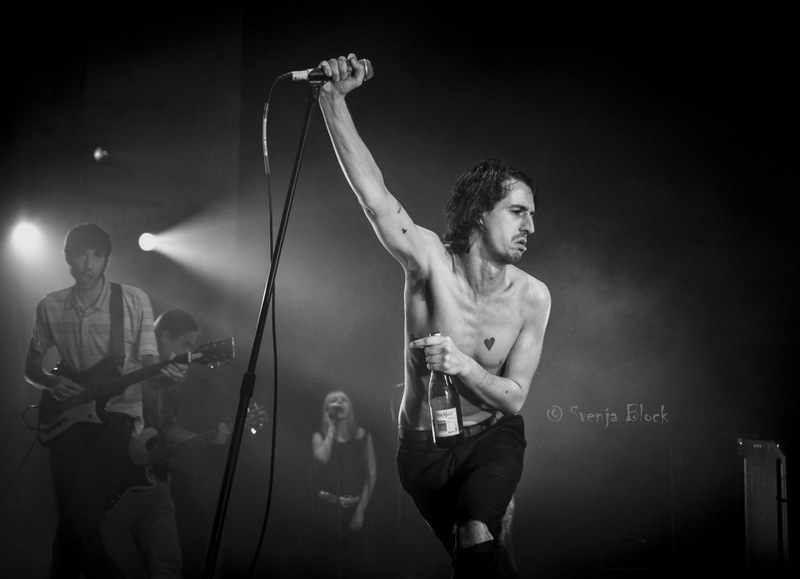 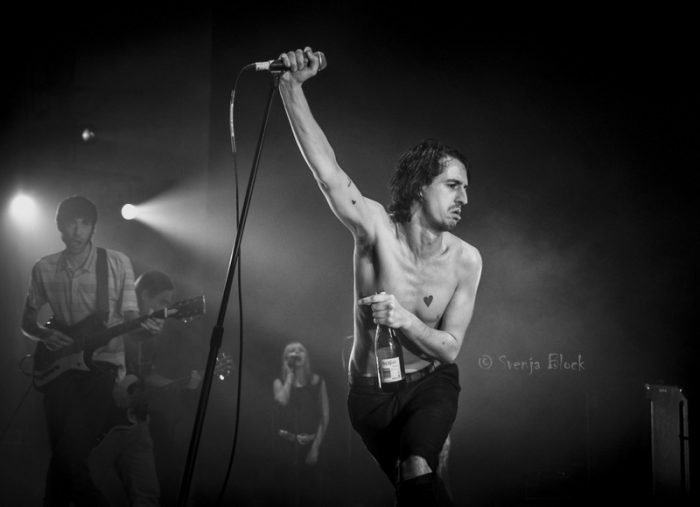 I’m sure we all have bands from our past that we are happy to namedrop with pride and give some indication of the way we spent our youth. Many people over a certain age will happily tell you about the time bands such as The Cramps or The Birthday Party once graced our venues. Some of us are rather glad we saw these bands in their prime and are pleased that these memories haven’t been tainted by the same personnel regrouping a few decades later and reminding us of how old we’re all becoming. We don’t need bands turning up on our doorsteps reminding us of how good they used to be. We want the best out of life, not a reminder of what the best once was. Some of us want to see the bands we listen to at home or in the car whilst they’re at their best and here’s a band still their best and still getting better.

As with some of our favourites many years ago, the ones with an uncertain future seem much more fun to be in rooms with. The individuals who see their world running away from them and get angry, messed up and who misbehave to the point of almost self destruction are what some of us are drawn towards. It’s a bit more interesting for the punters than witnessing the chap from the fucking Kaiser Chiefs telling people how good they are at singing whilst sitting in a big chair next to Tom Jones.

We’ll put the dirty details to one side for now and concentrate on the feet that fill our dancing shoes. We’re here for the tunes and to have a good time. We’re here to get loaded. We’re here to witness another show by the Fat White Family.

There’ll become a time when those in attendance this evening will look back at nights such as this with utmost pleasure and pride. The Fat White Family still have a future we imagine, however wobbly this may become and the numbers that want or need to witness this band may still increase. 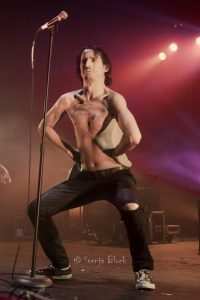 How many people in three or four decades time are going to be emotionally excited when reminiscing about the time they saw Major Lazer, Two Door Cinema Club and countless other household names in 2016 ? Not as many as those of us here we’d suggest.
This is a Fat White Family homecoming gig.

Located half way (we didn’t measure it) between The Brixton Windmill in one direction where they’ll occasionally turn up at five minutes’ notice and the Queens Head in the other direction where they once cut (and brushed) their teeth and wrote some of the songs we’re losing our shit to this evening. It’s an event that some people never would have thought possible during certain moments of the bands existence. It’s still a glorious mess that doesn’t seem orchestrated and it’s what we wanted and have come to expect when we walk through the door. We know the tunes, we’re ready to punch the air and we’re ready to sing along without being asked to by the band in front of us.

A Fat White Family show is the sort of event that made Rock and Roll such a thrilling experience in the first place. Playing songs that might be the last time they get played, playing gigs as though it could be a last performance. The spectacle of a band that appear to be incapable of doing anything else except write and perform these provocative foot tapping shout along songs that we’ll cherish for years. And there’s still only a couple of albums to currently choose from that remain at the front of any owners collection. If this band are still self-destructing then they even seem to be failing at this. They turn up, stagger around, play us their brilliant tunes and then leave the building to continue whatever else it is that makes them achieve this.

Those not here tonight or any other evening may realise one day, when it’s too late, that these are tunes people will drunkenly sing along to on more than one occasion as the years plod on. These are pieces of fucked up scuzzy exciting, sleazy plodding tunes that bands across the planet will one day nick ideas from just as every bloody Birthday Party riff has been bastardised, turned upside down and crushed to bits since 1983. An observation around the venue indicates that many members of the young bands that currently turn up around London are in attendance and gathering mental notes already.

We all know about the drugs, the arguments, the instability and the changing line up over the years that no one ever seemed to question or hold against them. Once they release another glorious thumping mess of a tune no one seems to care as much as they would do if this applied to any other band. We’re sure that those close to the band care a lot about the welfare of these individuals but for the beer spilling shirtless youths, climbing on top of each other, arms raised, and in full voice, it’s the tunes, the celebratory fucked up mess coming from our speakers at home (or from the PA in the largest London venue we hope we’ll ever see this band play inside) that the people here care about at the present time. 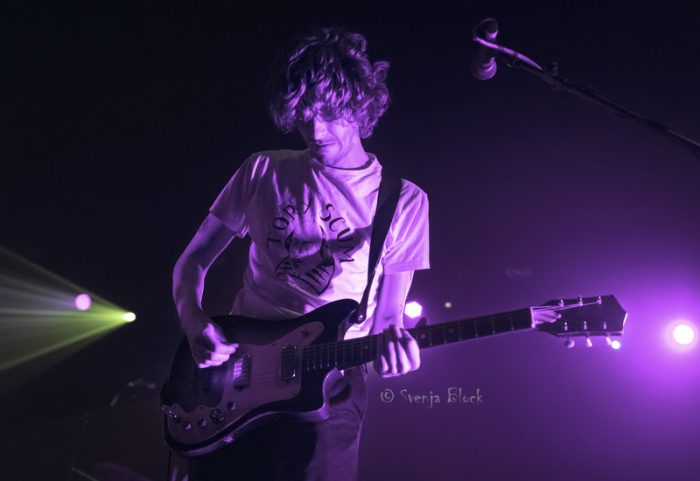 According to some reports guitarist and former member Saul left the band recently. He’s here tonight driving most of the songs into shape and taking over vocal duties on ‘Goodbye Goebbels’. According to one or two people this might be his last show with the band. One gets the feeling that if this is correct it still may still not be the end of the Fat White Family.

The additional saxophone player we’d witnessed earlier in the year but the addition of three backing singers to fill the large stage tonight we hadn’t expected. It’s felt that during ‘Breaking into Aldi’, (one of the newer tunes we’re still getting to grips with) that this is the tune the trio are really brought out for. It’s easy to think of Iggy or The Cramps during the evening but we’re reminded during this particular tune of a Rezilloz song from the early 80’s that adds to the list of comparisons some of us have been making since seeing this lot grace the six inch high stage of the Buffalo Bar in North London not too many years ago (We didn’t actually measure that either). 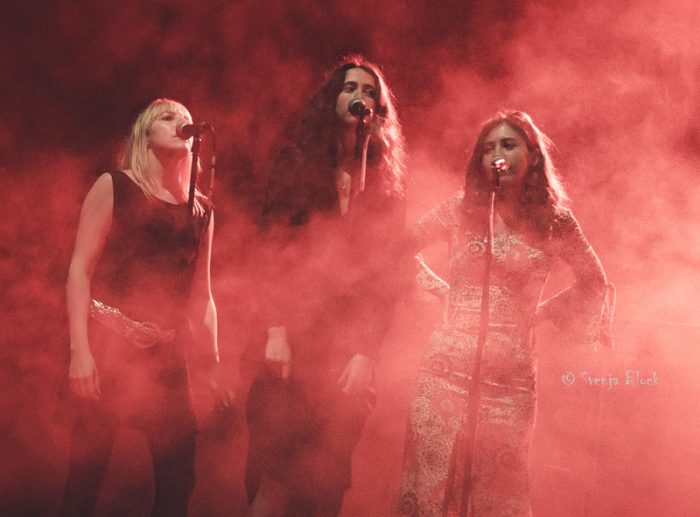 ‘Shane MacGowan tying my shoes I got Jerry Lee Lewis in a headlock’   Lias sings during ‘I Am Mark E Smith’.

This is like battle cry as fists are raised and a room of hundreds claim to be the lead singer of The Fall. It doesn’t make sense to the uninitiated but does anything this band make any sense?

The Fat White Family don’t allow us to think that they give a fuck about anything in the present and may not give a fuck about much in the future. They’re watching the area they inhabited turn from a creative hub of activity into another ‘small town England’ saturated in coffee shops, restaurants some will never afford to eat in and accommodation we’ll never be able to afford to live in.

Nothing appears pre-planned or fabricated in this Brixton arena this evening. When Lias sits on top of the PA speaker to mumble the intro to ‘Cream of The Young’ there’s no spotlight helping us to locate the front-man whereabouts. Some of us have no idea what is being said once someone says anything up there and doubling the amount of people on the stage when the glorious Black Lips join them for a version of The Monks ‘I Hate You’ simply adds to the mayhem we’d already been witnessing up until this fantastic finale.

The Black Lips earlier performance was equally as thrilling. A chaotic and enjoyable performance that had the front half of the venue catching and throwing back the toilet rolls being launched from the stage the band performed on. Some of us are already playing catch up on this band after just the one experience and The KVB on first also held their heads high at an early hour of the evening.

It’s Fat White Family we’re all here for though and it’s felt this is a band that will eventually be judged more after the event. Like Nirvana were, although we hope without any tragedy that pre-empted the American trio’s acclaimed status.

Until next time then. As long as we can still look at the band and recognise some of the faces that matter and recognise the tunes we know then this band will continue to crawl on in the most glorious way they’ve maintained since day one.

It may not be all over by any means yet but it’s great to see everyone in the same place appreciating what they’re seeing and hearing. Living for the moment.

Just in case we don’t get another chance.