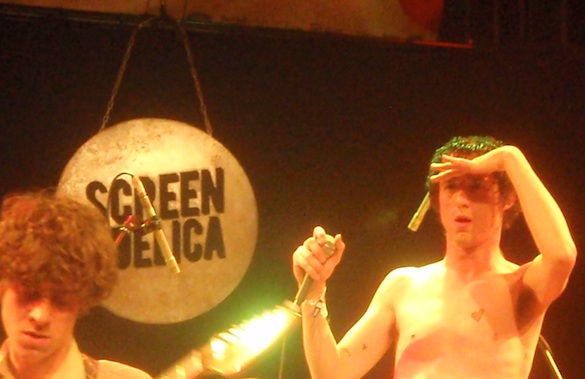 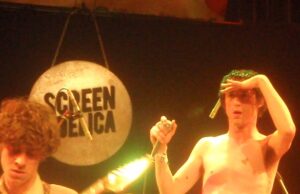 There’s a riot going on.

Not that Fat White Family sound like the erstwhile Mondays- they just have that air of dangerous genius about them and the potential to rally the bored and restless youth off the UK who need a new manifesto and a new soundtrack far away from the posh indie Fauntelroys.

In the blah blah blah of modern culture someone just went BLAH!

Fat White Family have been making the right noises for the last year and Louder Than War have been documenting their homegrown madness, celebrating the kind of band that mashes originality and madness in a Dionysian quest for sonic salvation.

Someone was recently saying that internationally British bands are meaning less than they used to. If we keep sending them those nice- for- the- radio- playlist -sensible -jumper- creeps then no wonder. Suddenly, though, there is a sense of attitude and purpose about or music again. Thank fuck.

The new noise comes from host of new bands who are not related so please don’t call it a ‘scene’ – scenes are an old hat concept. Fat White Family may have got up on stage with the Amazing Snakeheads earlier in the evening to sing one song as a gesture of we’re all in it together musical defiance but this is no scene for handy racking in HMV.
The band are playing to packed room that has that kind of ancient whiff of fffighting in the dancehall cordite atmosphere that all great rock n roll demands- you can’t tell if this is a party or a brawl as gonzoid punters with eyes out on stalks cram to the front of the stage bouncing with a psychotic madness to the bands loping and skewed take on gutter genius rock n roll that the UK has always really excelled at. A musical riot that ranges from the Sex Pistols, the Pogues to the Mondays and even Alabama Three and beyond- the Fat White Family have the imagination and the beautiful madness to be one of those bands that tears down the conventional and gate crashes the posh boy party of grey day modern indie.

Of course Fat White Family sound like none of these bands- they have their own agenda with steely bluesy riffs crammed into the mix and dredged out of the other end in another order with an added punk danger. Frontman Lias Saudi is stripped down and covered in body paint and sweat as he drapes himself across the stage like a suicidal Jesus on pills and power- a shamanic waif singing for the 189 hour party people noisily going mad in the rat runs of the British city centres, soundtracking the party that is going on beyond the law.

The band’s Champaign Holocaust debut is the calling card- the only manifesto and document of the middle of this decade you will need- a picture postcard of the real Britain beyond the chain store shops and chain store indie. Live they deal in danger and excitement, Lias is like a underfed Iggy Pop walking on the tightrope of madness as the band seethe the dark blues of destruction and beef up the music with gang vocals and grizzled riffs that somehow sound shiny and new and ready to impatiently usher a whole new generation into the wild and dark heart of madness that is key to all great music.

Already bursting out of the hipster quarters and into the council estates this will be the noisy and wilfully wild riot that will bring down the Tories and stamp on their stiff starched white collars that cannot be loosened by their pretend love of indie rock. Fat White Family reflect everything that is dark and thrilling about the cut and paste culture of the so called underclass and they have the songs, the attitude and the charisma to go all the way.