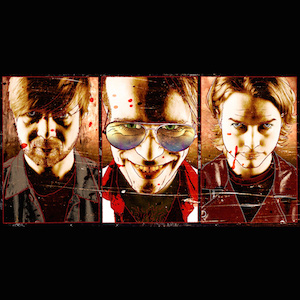 Dundonian quirk-rock loons and Louder Than War faves Fat Goth return with a third album musing on the weirder pleasures of the flesh. Joe Whyte listens and approves.

Quickly following up last album Stud with this new record Fat Goth have clearly kept themselves busy in the last year.

Festival appearances during the summer left watchers shell-shocked, delighted and at times baffled with their extremely unique take on post-rock-via-face-melting-guitars. Once seen, never forgotten. They are a trio of oddly fresh-faced youths with a twisted, warped sense of the absurd and musical chops that twist, turn and careen recklessly. The songs are nothing short of oblique; rapid-cycling changes in pace, power and precision and U-turns that surprise and delight.

They’ve been compared to Jesus Lizard more times than they probably care to remember but these guys exist in a very strange world of their own. Opening tune *disclaimer is a gentle send-up of themselves;  all lilting chords and Fraser Stewart’s crooning vocal which more often than not ends up as a hair-raising howl before the song’s end.

It’s all about the fun with Fat Goth, however; Sweet Mister Scary is all tightly wound rhythms and helter-skelter guitar with Stewart’s baritone blending to a scream. The album is a paean to the sins of the flesh and the band describe it as a “pilled-up, pint-swilling nightmare throwing down on the dancefloor and bothering all the females” which is a fair summation of events herein. Anyway, it’s difficult to be anything other than fond of a record that has a track called The Stevie Nicks Method which one can only assume is about Ms Nicks and her propensity for inserting cocaine into hitherto unlikely orifices…

On a similar note, Class A is  the central song for me (and the lead single) and probably the most readily accessible track. Chopping chords attack with gusto before Stewart’s twisted vocal leads the track’s oddly melodic mind bomb into swerving guitar and pulsating rhythms.

I’m not one hundred percent (see what I did there?) convinced by the production on this record, to be honest. Compared to Stud’s crisp, crystalline sounds this is a dank, murky thing and at times one strains to understand the swirling changes in the songs. That said, I think it’s a more complete set of tracks and I suspect the sound may open up after several listens. Sin Alter is a thundering cavalry charge of tripped-out psychosis and Lower Pleasance is an uncomfortable but oddly compelling stutter of fuzzy bass and scatter-shot drums.

Caligynephobia (the fear of approaching beautiful women, apparently, thank you Wiki) is the album closer and a seven-and-a-bit minute mini epic. Probably all that you need to know about Fat Goth is contained within; sleazy riffola, grinding bass, heart-attack drums and Stewart’s unhinged bellow and rich whispering lunacy.

It’s a weird journey, that’s for sure.