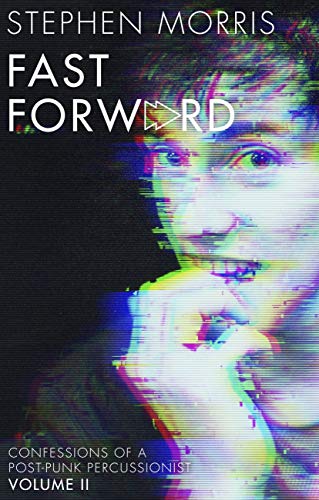 It’s not easy—in fact, it’s pretty tricky—to convey in written form the idiosyncrasies of everyday speech. A “voice,” you might say it’s called, in relation to autobiography or memoir. It’s an almost herculean task, yet Stephen Morris does it so well. His translation of conversational tone to print leaves the reader with a sense that they’ve really gotten to know the “humble narrator” of Fast Forward, as Morris describes himself. It’s one of the things I loved about the drummer’s first volume, Record Play Pause: Confessions of a Post-Punk Percussionist: Volume I (2019), and it holds just as true in the second volume. But I’ve got a lot more to say, too.

Picking up where Record Play Pause left off, the second part of Morris’s memoir begins with Gillian joining New Order and ends with Hooky’s departure. It offers an authentic, warm, and funny voice for any fan of Joy Division or New Order, and for those who long for the halcyon days of the Haçienda. The book is described as a set of ‘Confessions’, building on a longstanding tradition of writing the self begun by Saint Augustine and continued by other figures across the centuries (you know, from Jean-Jacques Rousseau’s Les Confessions in the eighteenth century to Chuck Barris’s Confessions of a Dangerous Mind in the mid-1980s). Beyond hearkening back to the content of all those seemingly autobiographical ‘confessions,’ Fast Forward also draws on the epistolary form to engage personally with the reader. Although Morris isn’t writing letters, he speaks to us directly in the second person throughout the text. Toward the very beginning, he tells us all colloquially that he’s “Stephen, but you can call me Steve” (thanks, Steve, I will!).

He anticipates some of our questions and at times even replies, as if giving us a chance to exchange written correspondence with our favorite post-punk percussionist. If you’re thinking that whole description I just gave you sounds a bit pretentious, let me draw you to the overall tone of Fast Forward, imbued with sincerity, humility, and humor. In other words, the idea that we’re reading a book of ‘confessions,’ I suspect, is all part of the fun that underlies Morris’s remembrances. Steve Morris is funny.

The memoir progresses chronologically, but it also contains frequent temporal markers in the form of music-related technology. The book starts with an acquisition of a Pearl Syncussion drum synthesiser (to replace the Simmons SDS4 synth infamously stolen during a New Order tour in New York City). As the narrative moves forward, time is delineated with various other synthesisers, an Apple IIe, a Sony Walkman, and, eventually, an Apple iPod. Music technology holds pride of place. And it lets us know how much Morris really and truly loves these objects is his almost affectionate way of anthropomorphizing them. He describes his drum synthesiser, for instance, as being “worried” and “impatiently waiting for love and new batteries,” ultimately “laughing to itself in sinister fashion.” Later on, New Order’s Roland TR-808 “SEEMED TO BE ALIVE,” he exclaims, describing the synth as a kind of lovable beast that “wanted to play with you” and “grooved in a way that no soon-to-be extinct dinosaur should.” After all, he says as the memoir draws to an end, “I still believe that music is magical.” And of course, we all share that hope and whimsy.

His love for music comes through at the turn of nearly every page, yet the narrative also illumines his love of film – another analog medium that feels endangered in the twenty-first century. Our introduction to Morris’s cinematic memories begins with a description of his Panasonic ‘portable’ VHS video recorder and camera. “[T]hinking I could make movies of some kind,” he explains, “I would go out in my increasingly unreliable Ford Cortina with Gillian on the lookout for interesting things to film before the winking red light came on and the battery expired.” That “video was going to be hugely important in the future,” the drummer writes, “seemed blindingly obvious.” Later descriptions of editing 16mm film in London with Gillian Gilbert and Rob Gretton should warm the hearts of any devotees of the tangible medium. (As a former cinema projectionist myself, reader, I felt a kinship with Steve—we’re on a first-name basis now, right?—as he described the process of splicing film and running it through a projector.)

It’s great to believe you have things in common with a member of your favorite bands, right? That’s how it feels when Morris writes, as if we already knew, that “you can’t go wrong with a bit of Morricone.” He describes Michael Powell (you know, of Powell & Pressburger fame) as his “sort of guy.” And perhaps the greatest (and funniest) cinematic reference comes in the form of what feels like an inside joke: a photo of the drummer inside a hollowed-out Australian tree, holding that portable VHS video recorder, captioned with “I attempt a remake of Picnic at Hanging Rock.” If you know, you know.

It’s not all sunshine and roses, of course. Morris’s honesty is refreshing, especially as he discusses the sexism that Gillian experienced in New Order (and in the music industry more generally) and, at moments, his own unintentional implication in it. He describes a cringey argument between he and Gillian in Bangkok (arising out of a shitty situation in which Gillian was frighteningly objectified in the Southeast Asian city), and his own observations of Gillian’s experiences on tour in Japan: “The idea that a female could be in a band and be anything other than a glossy figurehead or backing singer seemed incomprehensible to the mainstream Japanese music fan of the early eighties. Gillian was blatantly ignored and overlooked … Like she was not actually there at all.”

I’ve read a lot of accounts of sexism from men, dear reader, and most of them aren’t great. Many think they’re progressive or even feminist (gasp!), even as their descriptions of women in bands perpetuate the very attitudes to which they claim to be opposed. Steve Morris doesn’t do this, and his is a welcome voice. He seems to really get it, and for any part of his own socialization in the misogyny of the music world, there’s a sense of regret. A discerning reader might suspect that Gillian has been straightforward and clear in the lifetime she has shared with Morris, and her perspective has been an important and necessary one to the drummer.

At this point, I’d feel like a neglectful reviewer if I didn’t mention Morris’s very funny descriptions of the Haçienda and Factory Records. You’ve heard a lot of the stories before, I’m sure, but his words add something distinctive that you won’t want to miss. I won’t spoil all of the surprises, but I want to entice you with just one vignette:

“The Haç was like one of those ‘wouldn’t it be great if…’ stoner discussions full of grand ideas, mad ideas. Yeah, the Haç was one of those. A mad idea …  Commercially, a return ticket on the Titanic would have been a better investment.”

Readers looking for new details about New Order’s post-millennium fragmentation will be interested in Morris’s perspective on the twenty-first century shifts in the band. But for the percussionist, the warm and funny moments tend to reign. He’s quick to remind us of the laughter that permeated the rehearsal rooms and the stages in spite of the challenges:
“Gillian laughed. We all laughed. Laughter is infectious like that.” There are moments, too, where Morris delightfully refers to the “people who suspected that Factory were some Marxist splinter group,” and considers how Peter Saville’s sleeve designs and “Factory’s esoteric policy” appealed to the “vinyl addict, rarity-hunting music snob” in him. And how about all those times he was denied entry to the Haçienda by some unknowing bouncer?

Get with it, people! While acknowledging the tribulations associated with New Order’s first album, Morris still reflects with humor and fondness. He describes hearing a track from Movement “in unfamiliar surroundings like a hipster boutique, for instance,” in which he finds himself “surprised at how good it sounds.” To be sure, there are music anecdotes just like you’d expect in any musician’s autobiography, and they’re great to read. Yet ultimately, Morris doesn’t lose the humble tone that pervades the book. Despite New Order’s fame and international success, he still recalls his surprise at the idea of being distributed on Qwest in the US: “Quincy Jones had heard of us?”

Like Record Play Pause, Morris ends this second volume with a playlist that you can pull up for your own listening, streaming pleasure on Spotify.

Reader, it’s a great playlist with some unexpected (and fabulous) tracks. I’m not shocked to learn that, like me, Steve Morris likes The Jesus and Mary Chain’s Just Like Honey or Delta 5’s Mind Your Own Business, but I was joyously surprised to see Daniel Johnston’s
Devil Town, for instance, and Johnny Cash’s strange and beautiful cover of Trent Reznor’s Hurt.

I could tell you more, but I think it’s time to let you enjoy Fast Forward for yourself. It’s almost Christmas, so naturally it’s a great time to buy the book as a gift for the Joy Division or New Order fan, or Factory enthusiast, in your life (or, if that’s you, it’s the perfect moment to set aside some worthwhile reading hours). After all, like Steve Morris says, it all makes sense with “Christmas being widely accepted as a good time to finish anything from wars to opening advent calendars.”

You can buy Fast Forward from Rough Trade and your other favorite musically oriented record shops.

You can follow Steve Morris on Twitter, where you can indulge in his delightful commentary on various New Order albums during a #TimsTwitterListeningParty. You can also hear Steve discuss his new book with Dave Haslam on the first episode of Gorilla TV.