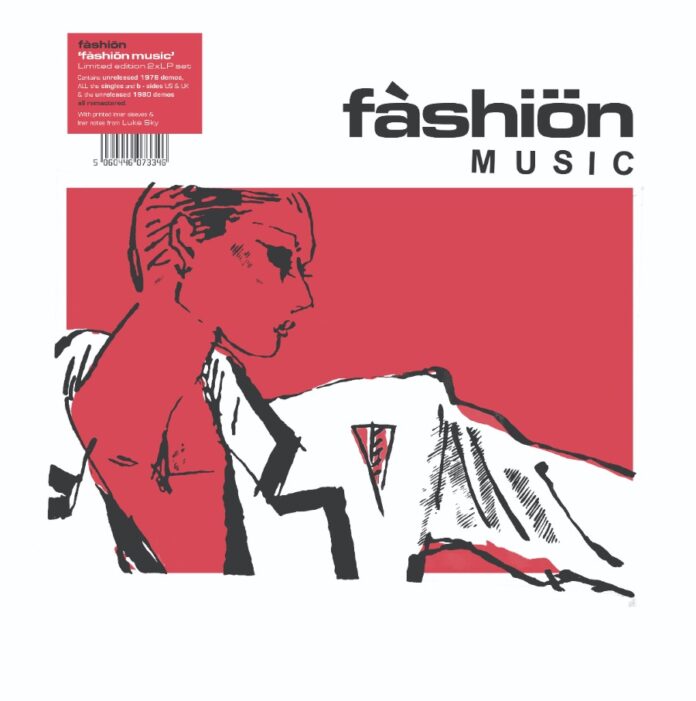 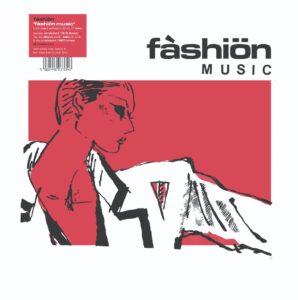 The early demo, live and officially released single recordings of Birmingham post punk band Fashion, including the Steady Eddie Steady, Citinite, The Innocent and Silver Blades 45s which were issued from 1978 to 1980. This collection also features a live set taped at RAF Brize Norton and has sleeve notes from original singer/guitarist Luke Skywalker aka Luke James. Ian Canty styles and profiles…

Anyone who has heard the recent and excellent various artists set Un-Scene! Post Punk Birmingham (reviewed here) cannot have failed to notice how early on Fashion, or Fàshiön Music as they styled themselves at the time, differed from their new romantic funk dabblings of the early 1980s. Obviously having another frontman gave them a different emphasis, but even so the two Fashion eras seem poles apart on first hearing.

The original trio came together in 1978 with a line up of Luke “Skywalker” James on guitar and vocals and a rhythm section of drummer Dik Davis and bass player Salvatore aka John Mulligan, who also played synth. The towering figure of James gave the band a strong focal point and his nervy vocal presence wasn’t something found much in their later sound, though the use of synths from the off was a direct marker to the Fabrique-era Fashion.

Fashion’s run of singles from 1978 to 1980 kicks off this compilation set. Steady Eddie Steady, the first Fashion A side, gives the listener a fair idea of what the band were aiming for in 1978. A lyric which allude to suicidal thoughts is mirrored by the tense rhythm and both were pressed into service alongside a futuristic new wave attack that in its delivery wasn’t that far away from a reggae-fied XTC with Andy Partridge out front. Given the mix of new wave stylings, paranoid wordplay and Jamaican beat, plus the fact they were a three piece, it was inevitable that they would be compared to The Police. In truth Fashion’s music is far more edgy and varied, as Fàshiön Music proves.

Steady Eddie Steady’s flipside Killing Time though seems to support the Police hypothesis as strongly as anything in their oeuvre. So it was not too much of a shock to find they came to the attention of Miles Copeland’s I.R.S. record label soon afterwards, who signed them up.

Citinite, the next 45, presents something of a step forward, as skittering electronics and a sense of louche playfulness are added to spice up the mix. Its frantic and punky reverse Wastelife follows and this shows yet another side to the band. Silver Blades, a far more synth pop-tinged effort with buried bluebeat and harsh guitars cutting in, shows the rapid development and imagination that marked Fashion at the time. The flipside Silver Blades A Deeper Cut is in effect a dub version. Next 45 The Innocent has an appealing undertow and certainly deserved to make headway as a single. It also had the bonus of coming with the urgent drive of Sodium Pentathol (their spelling) Negative and a dubwise Red Green & Gold as well.

We then have six demos from 1980, which found Fashion working on new material after their 1979 Product Perfect LP had been released. An austere futuristic sound introduces the taut psychodrama of Fiction Factory. But the reggae/rock collision that was at the heart of early Fashion was still there and some crashes of guitar and energy take the tempo up a notch briefly. Do It In The Dark, where the sound quality dips slightly, is much more like their earlier material and next Steady Eddie Steady is exhumed two years on. It is perhaps a lighter treatment with keyboards featuring strongly, but there isn’t really that much in it.

Emotional Blackmail (not the song made famous by The UK Subs) I felt was one of the weaker efforts here, but sounds like it could have been decent live as it has a good drive to it. Then the edgy electronics of Bad Move follows and finally for these 1980 demos a snappy and attractive Let Go shows a second LP by this line up of the band had definite promise.

For the final part of this first disc we go back two years to 1978 for another set of demo recordings. The upbeat riffing of Bike Boys later showed up on Product Perfect and we have seen that Killing Time was on the first Fashion single, but the other four songs are all seldom heard. I Don’t Take Drugs, I Don’t Tell Lies finds the band adding Roxy Music touches and a repetitive guitar figure to a basic beat, before the tune changes direction and gathers speed. It’s still quite strange though, with a skat singing vocal refrain helping to make it memorable.

We’re The Fashion continues in a similar manner, with the influence of Bowie and punk duking it out and the terse Small People is in the more familiar Fashion punk/new wave/reggae mould. Finishing disc one of this set are the fairly basic instrumental The Naff All Tango and the aforementioned Killing Time, which sounds pretty well formed at this stage.

The unlikely confines of the RAF base at Brize Norton provided the venue for the 10 song live set which opens up the second disc of Fàshiön Music. The sound quality is good and the band breeze through material from the singles and Product Perfect. I would hazard a guess at this gig taking place somewhen during the autumn 1979, though this is not confirmed in the sleeve notes.

A dynamic mash-up of Don’t Touch Me/I Don’t Take Drugs/Sodium Pentathol Negative provides an early highlight and some nicely rudimentary synth moves enliven Citinite. Steady Eddie Steady receives a spirited work out and Big John/Hanoi Annoys Me/Innocent packs another three songs together adeptly. A cutting Die In The West is followed by Symiane, a more typical reggae/new wave sound which doesn’t seem to have been recorded anywhere else by Fashion. Bike Boys and Wastelife conclude an arresting enough live set which is tight, nimble and powerful. The final two tracks of this set are zesty 1978 versions of Sodium Pentathol Negative and Steady Eddie Steady.

Circa Fàshiön Music Fashion’s work would have probably fallen under the catch-all new wave category, but they did add something unique and inventive that took them far away from merely being post punk also rans. Always approaching their work with a playful spirit of adventure, they dipped into many areas to pull together a sound with a charm all of its own and it is something that is well worth checking out here.