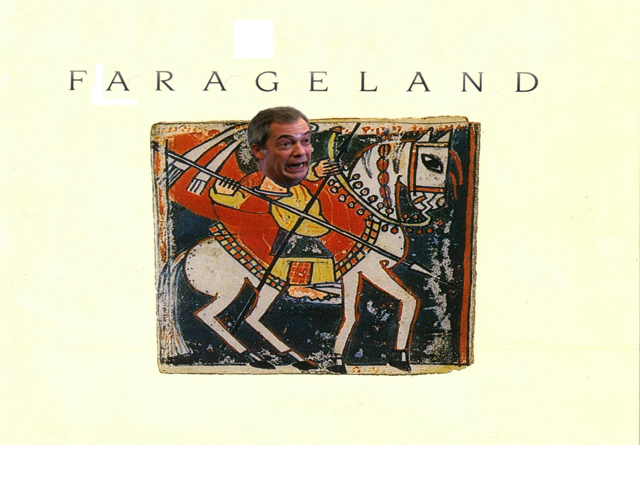 Our man explores the policies of the two “fringe” parties, UKIP and The Greens, vying for the votes of those looking for an alternative to the status quo.

“How long , oh Lord,  how long? …how much longer will we have to wait …[for]… some high-powered shark with a fistful of answers”? – Hunter S. Thompson

Until very recently politics has been a dead horse decaying in the desert. Since the turn of the new millennium the UK has seen voter turnout figures drop to around 60% (taken from here), a situation that hasn’t been that low since 1918, and continue to remain at a pathetic lull. This has been blamed on many things, the decline of a respectful youth, the slow death of print media, Grand Theft Auto, foreigners, and a plethora of other nonsensical dogshit reasoning that doesn’t make sense and merely points the finger elsewhere so as to avoid any personal responsibility. The fact is, politics is fucking boring and has been for some time.

Politics itself hasn’t changed very much in the grand scheme of things, but the figureheads of the various parties have. Gone is the brutal tone of Winston Churchill, the iron fist of the Iron Lady, and the exuberance of “man of the people” Harold Wilson, donned in his raincoat and puffing on his pipe. Instead we are offered grey, featureless, robotic drones who are so fucking dull they work like a bunch of bastardised Medusa’s, sending anyone to sleep who even dares to look their way.

Nigel Farage summed this up perfectly in the Express last week. He labelled Clegg, Cameron, and Miliband “utterly hopeless, dull as bloody ditchwater” and claimed himself to have “the ability to talk to people and have them feel engaged, rather than patronised” (taken from here). I hate to agree with the sonofabitch, but he’s right. In comparison to the Ditchwater Three, Farage comes across as a combination of Han Solo and Don Quixote in, oozing a charm that, though he obviously has an underhanded snake like tendency, unwillingly draws you in. Though his policies are abhorrent, and the guy would no doubt sell his own mother for the right price, after watching the Have I Got News For You episode he guests on I couldn’t help but chuckle at how well he took the constant barrage of shit the other guests threw his way. Farage acted genuinely like a man without a bug up his arse, and I couldn’t imagine any of the dullards leading the main parties doing the same and pulling it off so well. It was Boris Johnson syndrome all over again. Here was a man who, politically, I thought was a complete buttmunch…but it was a buttmunch I kinda wanted to go for a pint with…if I still drank (though that banning people with HIV remark was abhorrent).

This is precisely the reason Farage and his UKIPpers are doing so well, and slowly destroying the age old three party system. People believed Lab/Lib/Tory were the only options so much they would rather sit at home masturbating on the couch instead of voting for one of three humdrum fuckwits they found incredibly boring, but this is no more. The UK is going through a political awakening and peeking elsewhere for their “fistful of answers”. Which, even though UKIP is the shittiest possible party to pioneer this, is a great thing and is opening the door for other parties too.

On June 2nd of this year I wrote:

“The Green Party (a personal favourite of mine) could no doubt easily snag a plethora of big political fishes from both the Labour and Lib Dem back bench, especially the latter due to the recent ousting of Nick Clegg as an even greater charlatan than when he signed in blood with Satan by joining a Conservative coalition.”

…and it seems I was right (though in hindsight I should have put a huge wager on that prediction) as, according the The Green Party’s website, “more and more disaffected Lib Dems are moving over to the Green Party” due to what defector Andrew Baldrey called a bid “to help to raise the profile of the Green Party as a credible responsible political party which has a fully developed range of policies” (taken from here). This bolstering of the Green Party, if done correct and with the same gusto and charisma as Farage and his fruitcakes, could lead to the Greens becoming a real tour de force in major politics as, in comparison to UKIP and how much their anti-immigration ideas have demonised them, the environment friendly ethos of Natalie Bennet’s Green Party make them come across like the political manifestation of Jesus H. Christ.

But that’s just on the surface and, although in the above quote I call the Greens a “personal favourite of mine”, additional research shows there’s so many flaws in the Green Party that their United Kingdom utopia is just yet another serving of bullshit sandwiches to the people.

I was originally drawn to the Green Party, as I imagine many are, based on their environmental policies which place the island’s nature conservation as its top priority. But, much like UKIP, it seems the Greens are just another one policy party (though their promise to save the NHS is appealing even if it is echoed by other left parties) with most of their other ideals firmly stuck in the land of fantasy.

This week I’ve seen a constant barrage of shared articles via facebook claiming that “VOTE GREEN” is a good decision, not just because of nature, but because the party has promised to increase the minimum wage to £10 if voted in. Which sounds fantastic on the surface, but once wiped with the dust-cloth of logic soon shows this grotty promise for what it really is. A £10 minimum wage will no doubt kill small businesses. I asked the question on my own facebook and one commenter claimed that “forcing employers to pay a certain amount will cause unemployment for more people as the businesses who cannot afford that price won’t be able to offer jobs” and though one man’s opinion on facebook is not enough to base a political statement on, it seems that this is a very likely outcome from an increased minimum wage (Google ‘will a higher minimum wage kill small business’ to be met with a multitude of articles relating to the US, though very few about the UK). The death of small business would see the exact opposite of what the Green Party supposedly oppose, with a speedy increase to a future where the UK becomes a series of clone towns and Amazon owns the internet. It makes far more sense to maintain and promote more healthy businesses to adopt the ‘Living Wage’ so that both people and businesses have more freedom in how much the pay/are paid.

Perhaps the Green Party will offer an incentive to small businesses in the form of a government stipend so that they can pay the £10 without losing out too heavily themselves? This article in the New Statesmen outlining the Green’s hope for “building a fairer society and an economy that works for everyone” does very little outlining and merely offers hollow promises. As the only way the party could offer such an incentive is to increase taxes, as would be the result of many of the party’s proposed new initiatives, your increase in wage would merely be an economic paper tiger with every additional penny going in coming right back out again and no one actually being any better off, just more equally in the mire. The only way for the Green Party to successfully implement 99% of their policies is to run the country like Sweden, which is fucking stupid.

This shouldn’t deter you from voting for them though, as the likelihood of them out and out winning is impossibly slim, and the few extra seats they could potentially grab would be a few extra voices to speak up for our brutally battered wildlife.

So the UKIP juggernaut steams ahead, with the Green Party trailing behind yet slowly gaining momentum, but there’s little cause for alarm or celebration just yet as I doubt either party will achieve any kind of major victory at the next general election. I believe we’ve yet to fully escape the three party prison with the UKIP European victory this year being merely the shoot from which the flower may bloom. What strikes me as curious is that both UKIP and the Green Party are offering policies that force specific ideals upon the country without any real choice, Farage being the iron gauntlet of the right hand, and Bennett the same of the left, yet people who claim to value our personal freedoms are putting their eggs into the baskets of these fringe parties without researching just what their hollow promises really mean.

The three party system may eventually die, but will this really be a political awakening or simply more of the same?

All words by Ian Critchley. More from Ian can be found at his Author Archive.