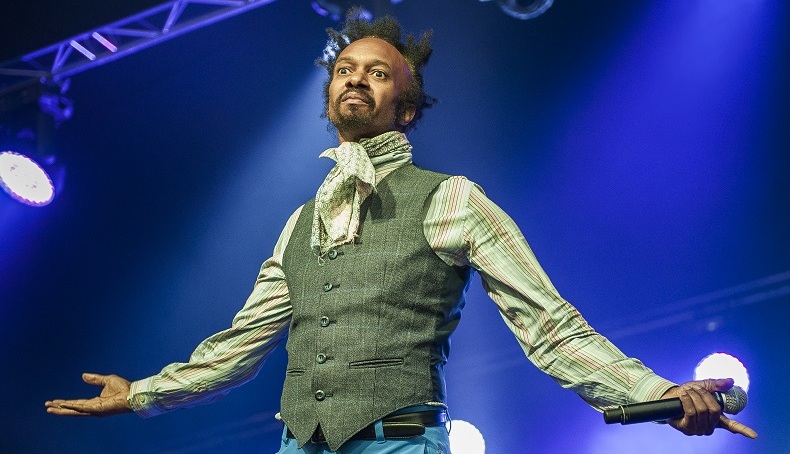 Back in the UK to promote his upcoming Please Don’t be Dead album, all the way from Oakland, Fantastic Negrito is on a mission.

There was a little competition in town tonight. Bryan Adams resorting to the ‘hits’ tour down the road at the Arena while Ed Sheeran entertained thousands who’d paid handsomely to stand in a football ground to be in his presence and listen to him and his guitar. Hopefully, there was a big screen.

No screen necessary though at the Night & Day Café; no boundaries physically or musically as the larger than life form of Fantastic Negrito was able to reach out, get up close and personal and share the heat. And I’ll wager that neither Ed nor Bryan had origami ceiling decorations hanging above their audience.  The thought also occurred as to how many times Negrito had played in a similarly festooned venue…. 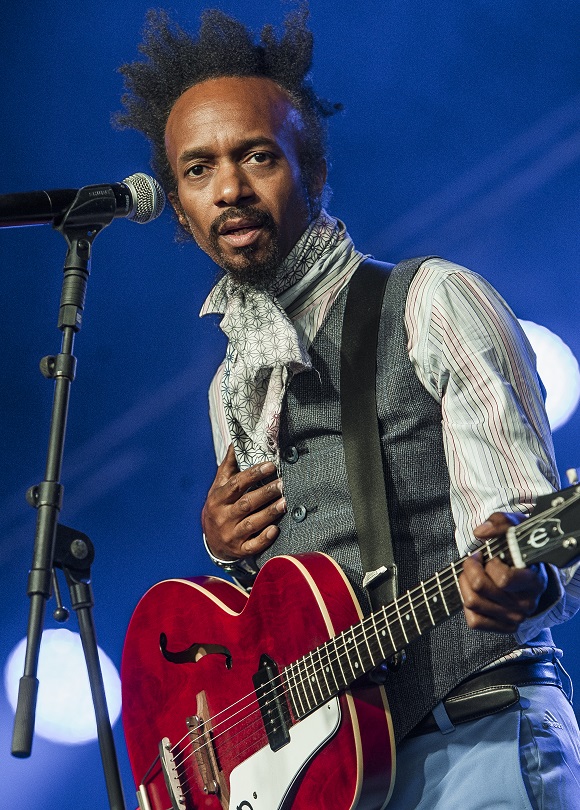 A recent Twitter announcement declared how blues people find him too rock. Rock people find him too soul. Soul people find him too rock. Nitpickers, the lot of them. He’s all things to all men…and women of whom there were plenty in attendance, ready to be seduced by his cool charisma. In fact, the ladies were very much part of an eclectic demographic. Aside the young and funky, t shirts ranged from Superdry to Pink Floyd and Public Service Broadcasting and one verified the owner had been in attendance at the Diggle Blues Festival. Mind it was no wider than those who may have witnessed him at the 2017 Cambridge Folk Festival – my own personal awakening.

But a hot sweaty club is exactly how Fantastic Negrito should be appreciated. Testing out how may suitable similes we can muster to go with as cool as… and as sharp as…, he delivered a blazing funk rock and blues blitz. The opening volley of “everybody needs a bad guy so they can have a saviour” paved the way for a gospel that called on James Brown, Bob Marley, Prince and Chuck Berry as Scary Woman rocked as hard as anything up or down the road.

New one A Boy Named Andrew had its Eastern chant belted right back at him as the first of some  choice cuts from Please Don’t Be Dead – a reference either to his own life threatening accident of years gone by or a thinly veiled reference to the  state of his nation – all adding to the white hot, soul shaking, knee quaking, bone rattling intensity.

Early doors, Maddy Storm had confirmed her reputation as one of Manchester’s up and coming with a brief opening set. Decked out in a slick white suit, impressively flared, the likes of which hadn’t been seen since Buck Dharma of Blue Oyster Cult was in town in the seventies, she and her band ‘s desert dry hard blues rock gave enough of a taster to pique the interest. Retiring to the bar for the main act, she’ll have come to the same conclusion as the assembled congregation. Bryan, Ed, you probably did your best, but hats off to the man guys – there was no competition at all.

Have a listen to Maddy Storm on Soundcloud

Words and live photography (Cambridge Folk Festival 2017) by Mike Ainscoe. You can find more of Mike’s writing on Louder Than War at his author’s archive and his website is www.michaelainscoephotography.co.uk