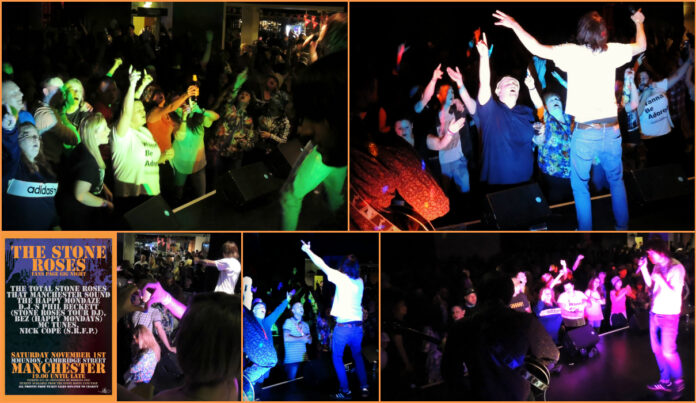 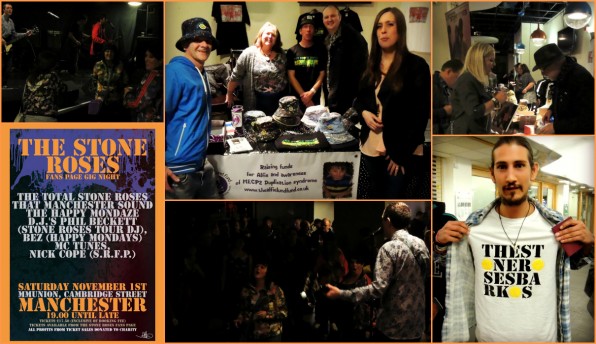 Fans With Benefits: The Stone Roses, Their Fans and Charity Fund Raising

October 18th 2011 and The Stone Roses are holding a press conference at London’s Soho Hotel and while the wheels mentioned then haven’t fallen off, they have come to something of a standstill for the moment. What’s a fan to do while we wait for the next chapter to begin? We could fill the time creating internet rumours, force a young child into a lemon t-shirt for a photo op or stick the Made of Stone Blu-Ray on: just one more time. The Admin Team on the Facebook The Stone Roses Fans’ Page decided this time could be better spent.

January 2012 and page creator Richard Boaler was looking for:

“A place where people could discuss the reunion without trolling…”

…so, gathering up an armful of like-minded people he started his own group, The Stone Roses Fans’ Page, which is now nearly three years old, 14,000 members strong and a great place to discuss, share info and even make friends. With many of the page member’s having taken part in gig meet up’s we’re often asking the page to do more.

“Rising money for charity was something we (the Admin Team) were already discussing…” explains Richard “…because members wanted a night out we realised we could put that to good use: live music is always better than just meeting up in a bar and we’d then have proceeds to donate to charity.”

500 tickets sold later and here we are on Saturday November 1st at Manchester Metropolitan Students Union and the culmination of our efforts is under way, the bar staff are busy keeping up with the large orders and the stage front has filled up fast. 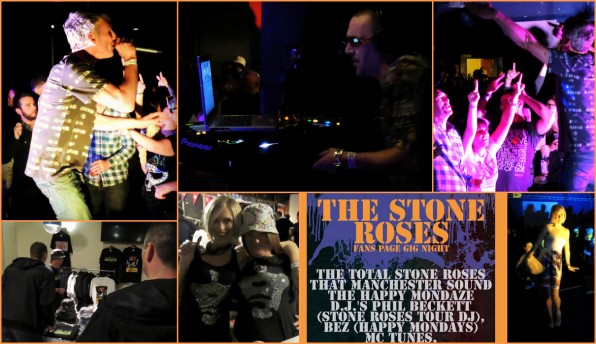 That Manchester Sound open the night with Oasis’ propulsive sing-along ‘What’s the Story Morning Glory?’. Exuding an enormous sense of enjoyment, the four strong group: Spencer Davies, Mike Lott, Paul Carey and Steve Maple, seemed to be bouncing off the crowd’s energetic camaraderie as they deliver a wealth of classic Manchester tracks including ‘Not 19 Forever’, ‘North Country Boy’ and ‘Sit Down’. Recreating the sound from such a wide and diverse musical collective with such warmth, diligence and effectiveness deserves much respect on top of the enormous round of applause and pleads to extend on their 14 track set, which they did at a moments notice and to the delight of the packed dance floor.

There was never any doubt that an appearance from Bez and a DJ set from MC Tunes would prove to be anything less that a monumental crowd pleaser and they certainly didn’t disappoint, the Salfordian vibe provider magnetically bobbed about the stage; occasionally sharing directive chants, stopping to shake many of the out-stretched hands and stooping for photo’s with the audience, always with huge grin. 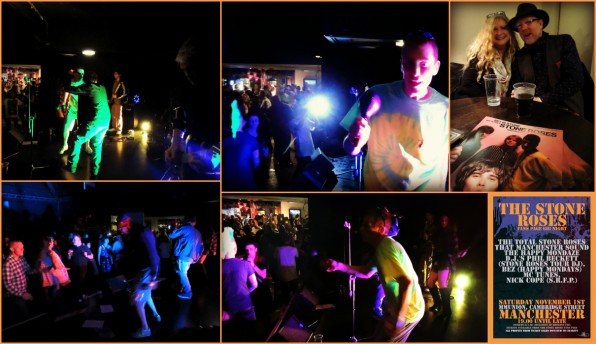 There is no doubt that The Happy MonDaze have got a certain swagger, and justifiably so too, as they deliver an impeccable performance that has just the right level of louche hedonism; from the band’s ‘Shaun’ and their classy, danceable psychedelia, great rhythm section, strong soulful vocals (darn good whip swirling too) from their ‘Rowetta’ and they certainly had a very worthy runner up for the best Bez on the stage tonight. Running through key Mondays tracks saw the audience in constant movement throughout their thirteen tracks. ’24 Hour Party People’, ‘Hallelujah’ and the band’s amazing, flawless finale of ‘Wrote For Luck’ managing to amp the crowd up just a notch more.

The build up to the night’s head liners had thrown measured excitement out the windows and with mass abandonment of restraint, a sea of arms fill the air as the bass that makes your stomach flip fills the air, The Total Stone Roses ‘Ian’ delivers a sweetly tempered and breathy “I don’t have to sell my soul, he’s already in me’ and everyone was singing along as loud as they could manage. The band, rather than looking dramatically like or dressing up as The Stone Roses, use iconic elements, subtle movements and a genuinely passionate recreation of the music and vocals to actualise what is an immensely enjoyable set. 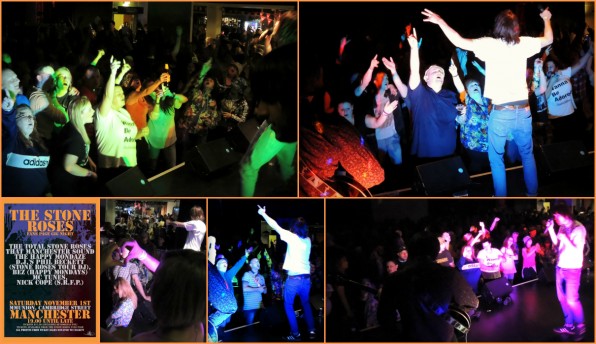 A little too much recapturing of youth, or living it large for the first time, causes minor stops, the band unfazed, whipping everyone immediately back up into a crescendo. The band continues with ‘Sally Cinnamon’, ‘Elephant Stone’ and ‘Sugar Spun Sister’. Everyone particularly seems to enjoy ‘Mersey Paradise’, ‘This Is The One’ and ‘Waterfall’. It is the rhythmical melodic finale ‘I Am The Resurrection’ that heralds a bitter-sweet eight minutes of lung bursting vitriol, knee busting bouncing and an emotional surge that the end is here. The crowds passionate response throughout, and the displays of unbridled joy from some members of the audience, were solid reassurances of a job done excellently.

Hundreds enjoyed a fantastic night of entertainment proved by some talented and genuinely enthusiastic artists and £4078.23 was raised for two worthy charities – it certainly makes the subsequent Sunday morning sore heads, stiff backs and poorly tummy’s well worth it, in fact so much so we will do it again next year.

The Stone Roses Fans’ Page Admin Team have nominated The Brain Tumor Action Charity and The Alfie Lund Charity to receive donations from the money raised. Mark Lund, father of Alfie sent us a special message:

“We have been truly touched by the response we have had via The Stone Roses Fans’ Page. We set up Alfie’s fund over two years ago and it still amazes us that our little boy touches so many people’s hearts. As parents all you want is to give your children the best possible life you can and whilst we have worked hard to raise what we have so far, we couldn’t possibly do it without the kindness of others. We would like to say a huge thank you to all the Admins on the page and of course to all the fans on the page.”

The Stone Roses Fans’ Page Admin Team: Richard, Stephen, Mark, Glynn, Nick and myself would like to thank: our families and friends for their support and assistance, everyone on The Stone Roses Fans’ Page for their contribution to the page success, to everyone who bought a ticket, the bands and artists for their patience and great performances, to James and his hard-working team of staff at Manchester Metropolitan Students Union, to Rita Corneille and her team at A Little Red Original, to Colin Hodgins for designing the posters and to Ian Tilton for his continuing support. If we missed anyone out we thank you too.