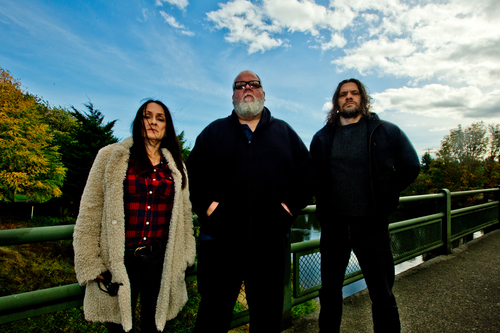 Tad Doyle, formerly of TAD (duh!) and Hog Molly is back with the band Brothers Of The Sonic Cloth and an album Tad himself describes as “…just riff heavy”. And what we’ve heard of it so far more than confirms that. More details and a sneaky preview video teaser in which Tad speaks about the album can be found below…

“It’s been about thirteen years since I last put out a record … and what makes this one different is it’s more a return to (my) roots … it’s just riff heavy.”

So says Tad Doyle about the new Brothers Of The Sonic Cloth album. And if that isn’t enough to gladden hearts of heavy grunge fans, the news that it contains a song which “brings to mind a huge mountain erupting” will do!

Brothers of the Sonic Cloth are a trio of “longtime rock soldiers” that includes veteran bassist Peggy Doyle and drummer Dave French (The Anunnaki) and their forthcoming full-length debut, we’re told, “…maintains a long-held tradition of conjuring some of the heaviest music from the darkest depths of the Pacific Northwest.”

The album is slated for release next month (17th Feb) via Neurot Recordings and features five hauntingly heavy tracks, with two bonus hymns included on the CD edition. Of the album we’re told:

“Brothers of the Sonic Cloth’s audio manifestations are welcomingly unfamiliar, splicing thick, jagged riffs through chilling post-punk drumming and hulking compositions that blow soulfully hot and desolately cold, sometimes within the confines of one track. Their long-form pieces present the kind of mature ideas and expansive progressions that outpace the listener’s short-term memory leading them off the proverbial map; familiar landmarks like sludge, post-metal, rock all but disappeared over the horizon. Authentic and authoritative, Brothers of the Sonic Cloth is as much a persistent thudding body punch of sonic destructive force as it is a thoughtful statement of awareness and the inescapable raw condition of life.”

The video below features a five-minute video teaser that finds Doyle presenting an in-depth look at the impetus in creating Brothers of the Sonic Cloth, the tracking process and the weighty themes that bind the record.

You can find the band on Facebook or check out Tad Doyle’s website here: taddoyle.com/botsc for more info.

You may also want to check out the first Youtube video about the release too which came out before Xmas: