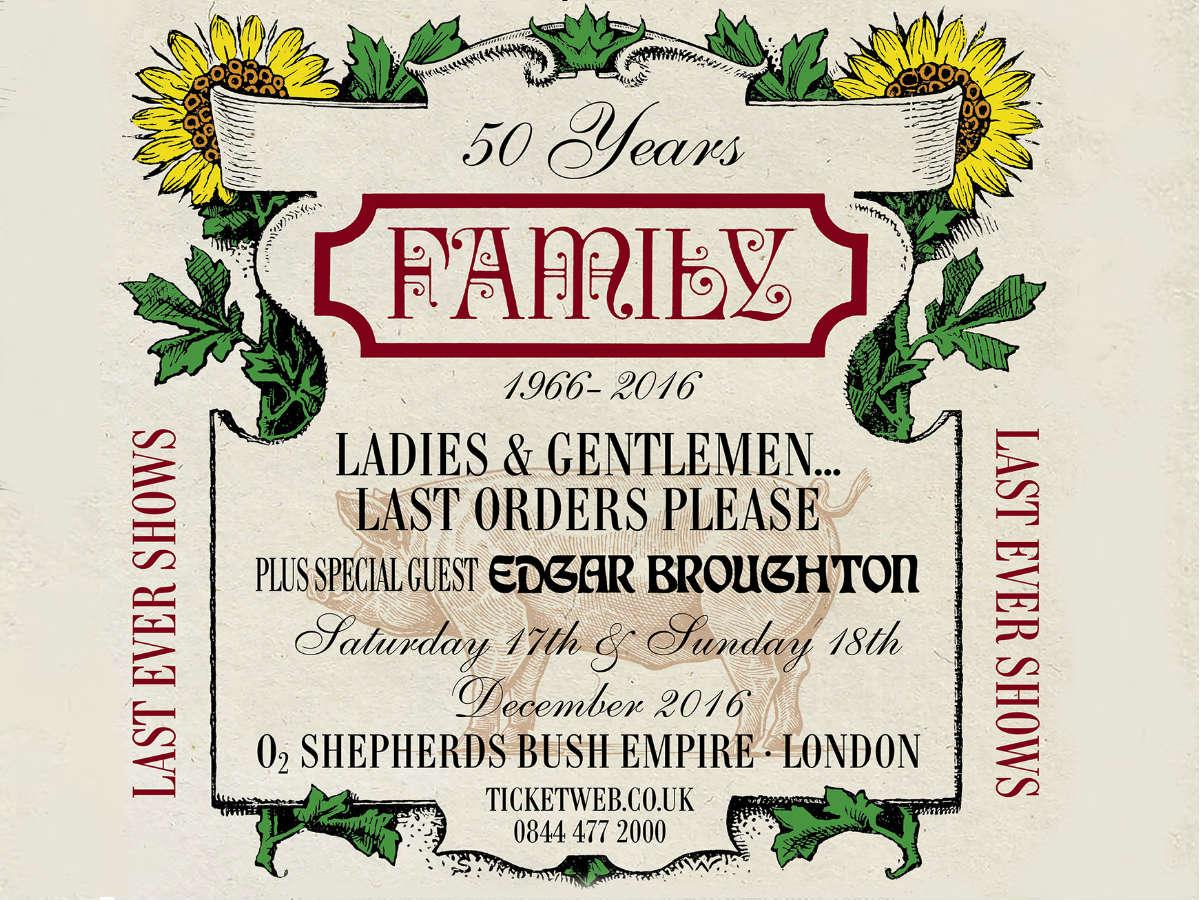 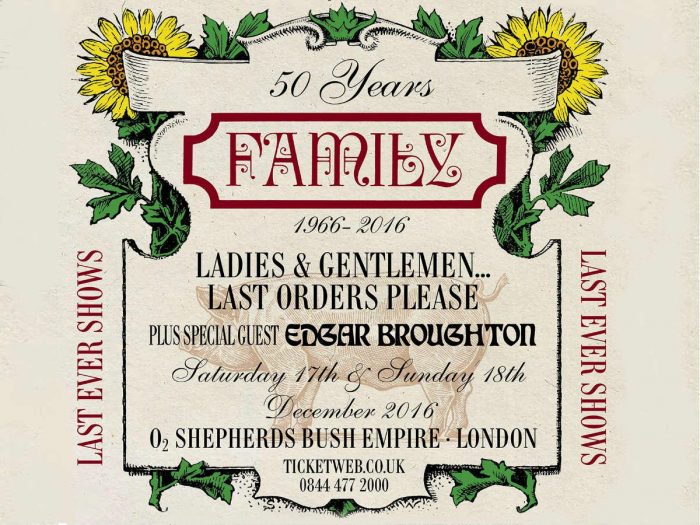 Closing off in style a reunion that started in 2013, Family play two nights in London. Louder Than War’s Craig Chaligne reviews the first.

As a tie up to the release of the carreer spanning set “Once Upon A Time”, Family played two re-union shows in February 2013 at Shepherds Bush Empire. Featuring four original band members (Roger Chapman: lead vocals, Poli Palmer: vibes, Jim Cregan: guitar, Rob Townsend: drums), these performances earned five stars reviews all around. The demand to see the band live saw them play London and selected festivals over the next three years with a series of three shows (two in London and one in Leicester) closing off this succesful second chapter. Backing the original members was a cast of musicians billed as “The In Laws” made up of Chapman’s excellent touring band The Shortlist (Paul Hirsch: keyboards; Nick Payne: Saxophone, flute, clarinette and harp; Gary Twigg: bass and last but not least Geoff Whitehorn on guitars). Rob Townsend wasn’t present for these last few shows and was replaced by former Gary Moore drummer Graham Walker. Family didn’t get the success they deserved in their original incarnation so this second coming gave the surviving members the opportunity to play their great back catalogue in front of appreciative audiences for one last time.

The evening opened with a short acoustic set courtesy of psychedelic bard Edgar Broughton. Family took to the stage at 9pm launching straight into “Part Of The Load” from 1970’s Anyway LP. With its repetitive bass line and a fine vibe solo by Poli Palmer, the song typifies Family’s style, a memorable song that doesn’t go the obvious route. Another fine track from Anyway followed, the funky rocker “Holding The Compass” after which Chapman gave Graham Walker the thumbs up for his drumwork.

Jim Cregan swapped his Stratocaster for an acoustic on “Drowned In Wine”, again a song with complex rhythms that still manages to draw you in. A stomping version of their 1971 hit “In My Own Time” featuring a fine sax solo by Nick Payne was followed by the Ric Grech penned “How-Hi- The Li” (again a great performance by Nick Payne, on clarinet this time). “Hey Mr. Policeman” from their debut album “Music in a Dolls’s House” was dedicated to former member Jim King who passed away in 2012. “Saturday Barfly” was all rollicking piano and heavy riffs and “See Through Windows” was introduced by Chapman as “1,2,3 noise”.

Original guitarist Charlie Whitney chose not to participate in the reunion in 2013 but Chapman still dedicated “Processions” to him. By that point in the show Chapman was in full flow, silencing hecklers with his legendary wit. Pacing the stage with his shirt drenched in sweat, he reserved the treatment he used to inflict on tambourines to water bottles and towels. The band closed off the main part of the set with two of their greatest tracks, the soaring “Top of The Hill” and “The Weaver’s Answer”, a musical masterpiece with probably one of the greatest set of lyrics a rock song has ever had.

The encore started with a funky version of “Burlesque” followed by “Check Out” the sole track from their swansong LP “It’s Only a Movie” aired that night. An extended version of the folky “My Friend The Sun” closed off the proceedings abruptly as Chapman cut the encore short leaving Jim Cregan stranted with his stratocaster around his neck ready for the next number. An abrupt ending that didn’t take anything away from a great performance.

~
For further info on Family you can check this website: www.familybandstand.com and Roger Chapman’s official website: www.chappo.com