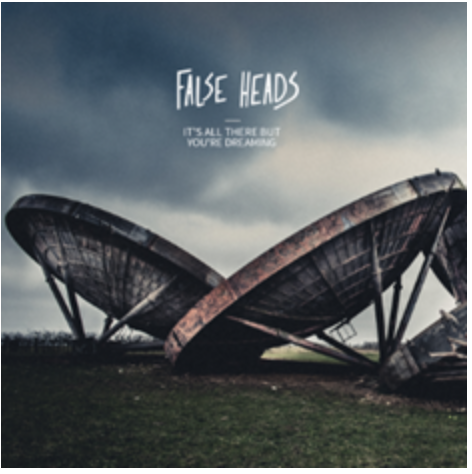 ‘It’s All There but You’re Dreaming’

Buy the album now from here

Formed in 2015, False Heads have a broad collection of work and this debut follows a long back catalogue of singles, EPs and an extensive touring history proving that their work temperament and talent are the two main catalysts elevating their career. Having also seen them live, their shows are capable of reaching that limitless level and creating that determined, authentic experience.

‘Whatever you Please’ is the album opener and is a forceful introduction yet still harbours an eerie sense of unpredictability. The soft grunge approach suits False Heads and is something I’d love to hear more of in the future due to its ability to illuminate their style with its tasteful stance. Luke Griffiths’ complimentary vocals throughout the entire album help bring you through the Rabbit Hole that this record successfully guides you down whilst the drums help resonate the debauchery this trio so openly project.

The entire album is packed with gritty guitars, sometimes borrowing from 70s punk inspirations and sometimes later-90s stimuli, with a modern day DIY philosophy. Whilst also offering social commentary amidst its post-punk sound, particular moments throughout take inspiration from the garage genre. Specifically, ‘Slew’ is a sharper release compared to an earlier issue and is an unapologetic racket with tasteful basslines, clashing drums and assured vocals highlighting the hard adrenaline fuelling the bandmates.

False Heads are more than just a punk band. Their diversity has well and truly been emphasized within this debut and they are worth more than just the singular ‘punk band’ label. The production behind the debut is clever; it’s clean and yet, somehow, has managed to maintain the harsh nature of the trio whilst not losing any of their validity. With progressive build-ups and a tenacious exterior, It’s All There but You’re Dreaming is a promotion of the band’s flexibility and the sounds that they can adopt and mould into their own. False Heads are a force to be reckoned with.

Catch them on tour HERE