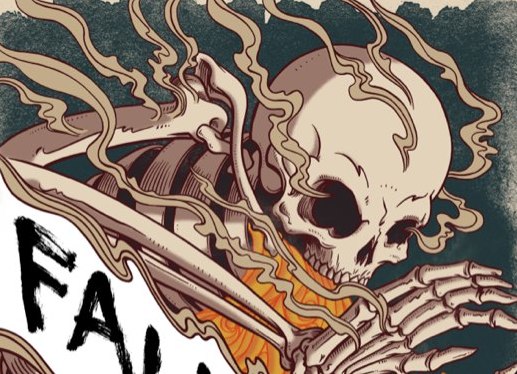 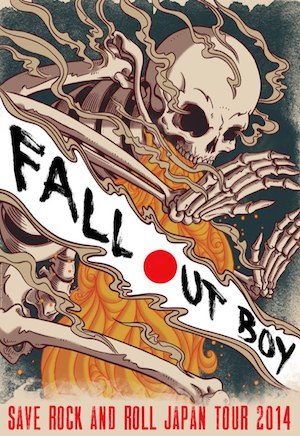 It’s almost exactly a year since Fall Out Boy ended their four year hiatus, one that even the band thought was a permanent state of affairs. The return highlighted with an album full of glossy punk pop, a wealth of triumphant live dates around the world and a briefcase containing glowing …… okay well we’re still waiting to find out just what is glowing in that briefcase.

This is their second series of dates in Tokyo since the reform; the last time they played we traveled across town under thunderstorms and torrential rain, which did nothing to prevent the shows selling out, nor did it stop the band delivering a monumentally crowd-pleasing night of big hitters. This time, the band’s third sold out show of their Save Rock n Roll Japan Tour, is met head on with the biggest snow storm Tokyo has seen in about four decades. Taking the challenge in hand, it seems the majority of ticket buyers (though they make it through up to 50cm of snow and navigate a transport network doing its best, but still heavily disrupted) find getting into the venue painfully cold and slow.. 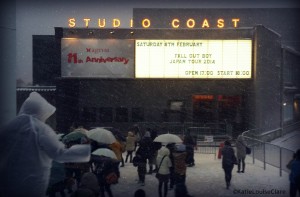 The lights go out about 10 minutes later than scheduled, the venue then filling instantly with Dimitri Shostakovich’s IV. Allegro Non Troppo and as the audience surged forward a couple of stage spot lights swing around capturing the band, each in a black balaclava, they’ve hit the stage already playing their instruments and Patrick Stump is demanding “Put on your war paint!”. Opening with the first track from the album that defined their return. The Phoenix is a relatively simple, yet passionately delivered call to arms that is really effective at promoting a rush of momentum, everyone is bouncing as Pete Wentz drags in to the air a giant FOB flag, the crowd cheering and screaming approval as he swings the ensign over his head again and again.

De-balaclavaed, Fall Out Boy don’t allow the opening momentum to wain, swinging into a trio of what is undoubtedly some of the most popular songs from their first go around: I Slept with Someone in Fall Out Boy and All I Got Was This Stupid Song Written About Me, A Little Less Sixteen Candles, a Little More Touch Me and to be darn sure they really have got everyone trying to “sing till their lungs give out” This Ain’t a Scene, It’s an Arms Race.

Oscillating between new and old tracks the middle section of the set, each immaculately delivered: Alone Together, Thriller, Death Valley, Sugar, We’re Goin Down, Beat It and Young Volcanoes. The new tracks are abundant with cinematic scale, strapping revolving chants and Stump’s distinctive bitter infused energy. The band seem less to speak between songs these days, although when they do it is usualy a personal and heartfelt exchange: the weather is admonished and thanks given for the efforts put in to actually be there, Wentz on most occasions doing the speaking, “I feel like I would, being here, I’d go broke buying green tea chocolates and cute things’ imparts Wentz. 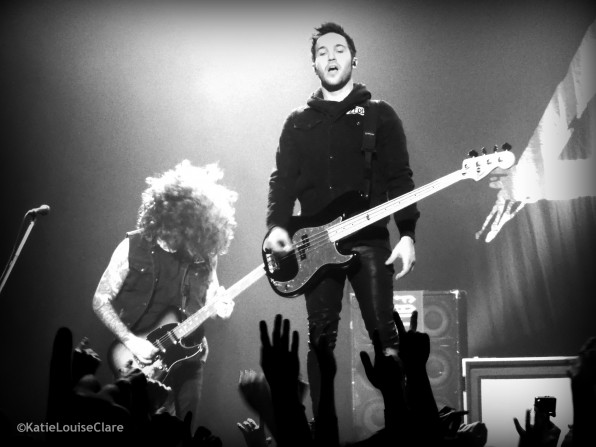 Shifting into a series of acoustically played tracks including a cathartic Grand Theft Autumn/Where Is Your Boy before  soon moving on to higher octane offerings. From Save Rock n Roll, one of the albums tracks with a little more depth, a few more layers and a little more snarl, Just One Yesterday is a wonderfully stylized pop song full of malevolent threat and seductive blackmail, with no Foxes to debut on stage, Stump continues throughout with a gratifyingly dynamic result.

There is no great surprise that the band leave the stage for a designated period, the audience, while awaiting the encore, self-entertain with our own version of My Songs Know What You Did In The Dark. The band returns to a loud and warm welcome as we move into the final three tracks: Save Rock and Roll, Thnks fr th Mmrs and Saturday, each delivered and accepted in a last minute frenzy of adrenaline. Having escaped into the energetic world of Fall Out Boy – singing and bouncing around for a few hours, we do have a genuine weather issue that in that time has worked it’s self-up into something of a bad mood. The street outside the venue has become a solid three inch thick ice rink and the strong wind having no buffer zone sends groups of us sliding back down the road as the snow painfully slams into our faces: we are snow blind, almost immobilised and it takes a ridiculous amount of time to make it back to an inundated station. Information screens frenziedly blink red as almost all lines are disrupted or inert, the station staff diligently helping people work out alternative routes, cold, wet and a bit bruised eventually everyone finds a way home.

It is a little smirk worthy that Fall Out Boy attached their slick punk tinged glam pop to a save rock n roll banner it’s doubtful that they are not aware of this disjointed marriage – however they did and still do produce some sharply observed lyrics delivered in a style that is humorous, entertaining and sometimes pretty intelligently assembled: a lot of this in no small part down to Patrick Stump, despite his solo efforts largely going unnoticed he is a phenomenal musician, songwriter and entertainer and to have him doing what he does so well with Pete, Andy and Joe (three likable and proficient musicians who, time and time again, deliver decent albums with solid shelf lives and great live shows) is brilliant.

The Save Rock n Roll European Tour 2014 starts March 15th in Cardiff – while some dates are already sold out there are tickets for shows still available. Check the bands official website or the venue for the most up to date details.

Save Rock n Roll (Island Records CD, DL, LP) is available now from most retailers or through links on the bands official website. Save Rock and Roll: The Young Blood Chronicles parts 1 – 8 can be viewed in order here.