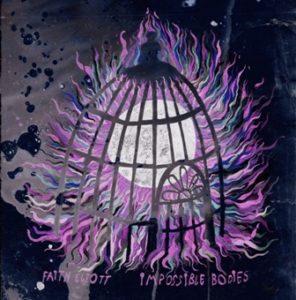 The driving desire to shed ones own skin and become someone new is a universal feeling. As humans we are always searching and seeking for duality of new and familiar. That innate need to progress as an emotional creature, to be better..to be safe….to be content is one that has meant we have been innovators and destroyers, lovers and haters. The grass is always greener…

Impossible Bodies is seeped in the narrative of change. Faith Eliott uses the animal kingdom as a reflection of our own selves and in doing so she has created one of those albums where the imagery is so powerful it plays film reels in the minds of the listeners. Their use of instrumentation, sometimes stripped down to nothing but Eliott’s voice and guitar whilst other times being surrounded by a lush bed of strings and harmonies helps Impossible Bodies step out of its traditional singer-songwriter setting and transforms it into an album that is more akin to the likes of Radiohead’s A Moon Shaped Pool, Gaelynn Lea’s Learning How To Stay or Kathryn Joseph’s From When I Wake The Want Is.

One aspect of Impossible Bodies that is vital in its success is Eliott’s voice. It is a voice that is richly recorded allowing you to hear the breath and the underlying fragility of its owner because for all the powerful moments that run consistently throughout the album it is that base human element that makes it really work. Eliott delivers lines with such a poetic lilt and nothing but utter conviction allowing you to relate to them whether that be laughing at the witty lines or empathising with words describing loss and yearning (the latter being most effective on album standout Toy Comet).

Impossible Bodies is as strong a debut album as you could wish to hear. It is the sound of an artist with a most wonderful gift for storytelling and for songcraft. Colin J. Nelson’s production and mixing skills help place Eliott’s songs in a world that is familiar, spacious and welcoming never allowing anything to detract from the words or from Eliott’s performance. An arresting and emotional listen, Impossible Bodies tells universal stories in a new and exciting way proving that in Faith Eliott Scotland has yet another artist who is set to enter the hearts of music lovers all over the world.