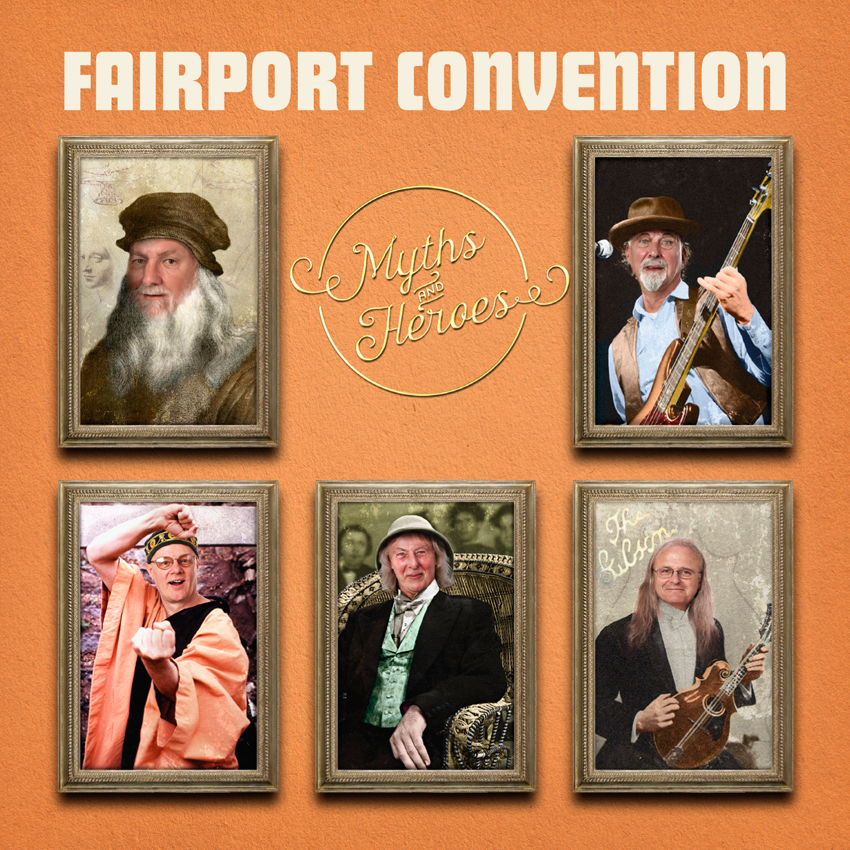 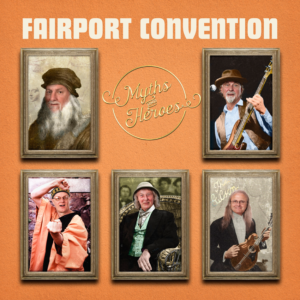 Legend has it that Fairport Convention were the first ever English folk rock band. Having formed in 1967 they’re still releasing incredible albums with this, their latest, getting a huge thumbs up from Louder Than War’s Dom Walsh.

With a back catalogue that boasts some of the greatest and most revered albums of all time, not only in folk rock, but in music in general; there is absolutely nothing left for Fairport Convention to prove in terms of gaining critical praise and making music. Perhaps with these shackles removed, Fairport Convention has released their best album in many years, and certainly the best album that this incarnation of the band has released.

Whilst previous releases have been very good, Myths and Heroes has a more consistent, honed and tight feel. The songs flow very well together as a whole record. The mix of vocal styles from Chris Leslie and Simon Nicol dovetail perfectly throughout, whilst the mixture of upbeat songs and tender moments make the pace a major factor in the albums success. Of the songs, eight of the thirteen on the CD release are compositions by Fairport members (there are nine tracks on the limited LP release). The remaining songs are compositions from friends of the band.

Chris Leslie is the most active songwriter on the album with his contributions including the rocking title track and even more rocking; Love At First Sight. The band on both tracks keeps the tempo up and showcases their undoubted quality on their respected instruments. Leslie’s ability as chief writer is further solidified with the atmospheric and dreamlike Theodore’s Song and Weightless/The Gravity Reel; a track that is indicative of this line up of Fairport due to Ric Sanders’ excellent electric violin sound that has become a true hallmark of the band, and Simon Nicol’s distinctive chord work on the electric guitar.  The song is loosely based on the recent hit film Gravity, and the music echoes the images that this film conjures in the mind.

Throughout the album, there are several instrumental compositions that largely belong to the flamboyant Ric Sanders. Album closer, Jonah’s Oak, is a song about the oak tree that flanks the field and Cropredy where Fairport curate their yearly festival; Fairport’s Cropredy Convention. The tree is seen as a tree of remembrance and the lamenting nature of Sanders and Leslie’s violins serve as a fitting tribute to fallen friends and colleagues who have been with and around the band for many years. The song is dedicated to, amongst others, the legendary Geoff Hughes who I saw man the microphone many times at Cropredy as part of the festival. Another fine instrumental piece is the quite magnificent The Gallivant. The song meshes together a brass section with the band. It has a distinct Bellowhead sound with a whiff of Gogol Bordello, which shows Fairport looking to their contemporaries for inspiration as well as being equally influential. The polka sound and arrangement by Joe Broughton sound truly superb. The whole piece is driven by Dave Pegg’s amazing picked bass work which always sounds unique, and Gerry Conway’s excellent timekeeping on the drums.

All the aforementioned pieces are highlights of a great record, but the true centrepiece of the album is the heartbreaking tale of John Condon; a fourteen year old army recruit who lost his life on the battlefields at Ypres in 1915. The song is a stirring epitaph to the fallen soldier and the horror of what our brave countrymen did for us in years gone by. Simon Nicol’s vocals are the perfect match for such a lyric, and Leslie’s harmonica give the song a true Celtic ambience to echo John Condon’s Irish lineage.

Guest contributors include the legendary Ralph McTell and PJ Wright. Ralph McTell’s Clear Water tells of the band looking ahead, sticking together and sailing the good ship Fairport forward in the sixth decade of their existence. Again, Nicol’s rousing vocals help give the song a multi faceted meaning; the metaphor and lyrics could be applied to many aspects of life. The harmonies throughout the chorus on the song are fantastic, with Pegg and Leslie helping the triple part harmony blossom. PJ Wright’s contribution comes in the form of Home. In the liner notes to the album, Wright comments that this is ‘an old blokes song.’ In the same vein as Clear Water, it is a song of reflection about family and friends, with a look to the future. Leslie’s Mandolin playing underpins the song, whilst Matt Pegg (Dave’s son) fills in on bass due to a tendon injury that Dave Pegg sustained during the recording of the album. He also plays bass on several other tracks whilst Pegg Senior contributes backing vocals.

Overall, Myths and Heroes is a remarkably excellent album. It is thoughtful, rousing, emotive and above all else, a record that the band are rightly proud of. Their recent gig in Salford saw the band play a good 80% of the new album in the set, which shows how much the band believe in, and enjoy the songs. The album will not bring in hordes of new fans, however the fans of the band who will undoubtedly get the album, should be more than happy with it. It is certainly the first record of the past four or five that has had me instantaneously hooked. I will look forward to seeing the band at Cropredy again this year, with great anticipation. It is always a memorable weekend. The band are on tour throughout the rest of February and early March and continue in May and June of this year.

Fairport Convention can be found online here: fairportconvention.com. They also have a Facebook page and a twitter feed, @faircropfest.