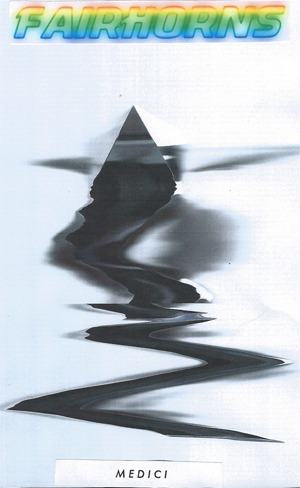 Fairhorns is Bristol based musical polymath, Matt Williams (Beak>, MXLX, Team Brick) a musician who is just as happy playing krautrock inflected alt-rock or hazy fuzz pop or, as is the case with Medici, extreme drone metal.

Medici is a visceral experience, one that grabs you by the lapels and demands you pay it attention straight from the off. Its mixture of Swans voodoo dread and screamo vocals can enthrall and terrify in equal measure.

From opener, Document 23/a to closer Codex: Coward’s Invective, Medici surges with despair but the album also contains moments of beautiful melancholy and pauses for reflection. A layered album that, at moments, makes you wonder how this is all the work of one man. Every song on the album has moments of magic, but it’s on Hologram At Trevi and Upfuck Paraiso Churn (how’s that for a song title), that the album truly shines.

Hologram starts with single hi-hat shots whilst a whispered, half mumbled vocal feels like the singer is in the room with you, slowly cajoling you into his doing. The song then builds before a thrash explosion sends the listener spiralling into the fire. Just when Hologram threatens to become too much to take, the song strips down to a beautifully plaintive bass outro that shows the heart behind the madness.

Following Hologram is the aforementioned Upfuck, making this one of the strongest one two punches on an album that has been heard for some time. Upfuck follows in the thrash vein, but its switch into 4/4 straight up rock is a revelation. After the gloriously disjointed time signatures that the has proceeded it, this is the real point of the album where you the listener can get their head down and lose it. An anchor in the storm, a true f*ck yeah moment and, in its straightforward nature, a real shock to the system.

Medici is an album that, even though it’s full of shifts in time, volume, and emotion has a single thread running through it. A single DNA that makes the album a complete entity and a fully realized vision, the limited nature of which makes this an even more must have purchase.

A triumph of despair and music as catharsis.

To pre-order Medici and for a listen to Codex: Coward’s Invective go here.