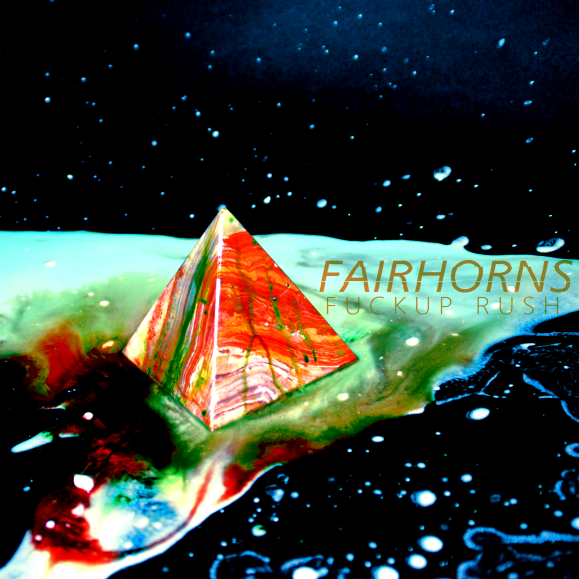 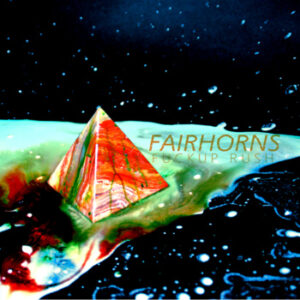 Due out 30th March

Fairhorns last album, Doki Doki Run, was released way back in 2012 to much critical acclaim. It ended up scoring slots not only in our album of the year list but also the Quietus’ amongst others, so to say his new one is hotly anticipated is an understatement. Simon Tucker got his hands on a pre-release copy recently and has left us the following review.

Within the press release for FuckUp Rush Matt states that this is a “shying away from the motorik of miserable ease prevalent on Doki Doki Run” and whilst in many ways that is true, there does also seem to be a sharing of space and time between the two releases. The difference is that where Doki Doki Run did indeed utilise motorik rhythms, it was a far more polished album that FuckUp Rush. This album feels nastier and more uncompromising than Doki and it also sees Matt utilise sonics and harmony to more direct and devastating effect.

One of the finest examples of this, and a truly remarkable moment on the album is ‘Rejoice In Muck’ which sees its author pouring out anguished confessionals over incessant bass drum / synth revealing to us his apparent inadequacies in what is now a seemingly terminated relationship. Lyrically, Rejoice is a masterclass in honesty and repetition as effect as Matt tells another “it’s not your fault” and about times “when I was sane” all of which are sometimes layered and layered with other voices (all Matt’s) and sometimes stripped bare where you feel like you are in the room with him as he confesses all. It’s a wonderful mixture of production skills, musicality, and lyrics, combining to make a perfect whole.

Of moments that hit hard there are plenty. There’s the industrial, tribal, doom of opener Like Fire which sporadically bursts into metal (machine) thrashing and concludes with almost unbearable tension, or the surface noise gabba of ’23inadumbcodebecuzgoodmorning’ which allows only brief moments of tension release before throwing back into the void. A twisted and fuzzy logic that sings like a hymn to the despairing.

To assume that this album is all noise would be a mistake as there are moments that really swing and groove, like ‘I Come Death’ which, whilst dealing with that most feared of subjects actually has an innate danceablity to it and it morphs magically into the disturbed ambience of ‘Medici Waits New’ which shifts and slides, at first unsettling us before easing us down into some beautiful piano which is one of the most startling and special moments on the album.

Penultimately we have the disparate and yearning ‘Dysphoric Thrumm’ which seems, on the surface, a more conventional song, but contains many prickly and subtle moments that delight and with the spoken word section that closes it really does smack you around the head with emotional clout. Another honest moment in an album full of them.

Closer ‘Culture Is Plague’ rages against the melancholy of its predecessor by galloping ferociously to the finish with a cacophonous sound that spits out melodic line after melodic line with numerous instruments, each taking turns to take us to the nether.

FuckUp Rush is, quite simply, one of Matt’s greatest releases to date. It’s a combination of all the styles that he has utilised in the past, whether that be under his Team Brick, Gnar Hest, or MX LX, guises. It’s a coherent and exciting ride that plays out like a Phillip K Dick novel. A body horror movie where heart and head meet machine and where the personal and the universal collide.

Pre-order / buy the album here: kindarad.bandcamp.com. Matt’s also on twitter both as @Fairhorns and @timetemple and on Facebook.