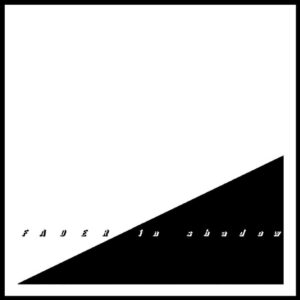 Benge himself has all but become a member of Blancmange of late. Co-writing all of the tracks on the last album Wanderlust, and sharing the instrumentation, his experience not only as a solo artist but also with the likes of John Foxx And The Maths, Wrangler and Creep Show, adds an invaluable input to In Shadow.

The eleven tracks on In Shadow, probably unintentionally, hark back to Blancmange (version 1) via the synth sound which is almost retro sounding in parts. Sometimes drawing comparisons to Happy Families, Mange Tout and Believe You Me is perhaps not surprising given Benge’s love for vintage synthesizers and recording equipment. The result is a thoroughly pleasing collection of eleven tracks each with enough influence from both Arthur and Edwards to please fans of both camps.

The partnership works well. Tracks are cohesive and often perfectly arranged affairs, Aspirational sounds like it could have been lifted from the 1982 Blancmange long player, not to say that it sounds dated but that is fits vocally and musically into the critically and commercially acclaimed debut. Initially it’s simple but, subtle additions bring the track completely up to date as with everything else on show here.

Vocally Arthur is as distinctive as ever. Instantly recognisable, his Lancashire tongue and presentation makes him one of a kind – a cross between song and spoken word, his lyrics revisit a dreamlike status between the real world and the one that we only dare to visit in sleep creating a surreal juxtaposition of the two.

Mindsweeper brings back memories of Sad Day albeit with an electro contrast and the title track has a fabulous sharp but echoing drumbeat showing that less can often be more. Always Suited Blue has a darkness that seems to be the theme of Fader, perhaps providing an outlet for both artists to experiment without the constraints of one of their other acts.

What is striking is that Fader are able to put together an album of such quality and interest that its appeal grows on every listen. Where the two go next is hard to say, they are becoming predictably unpredictable and that is refreshing in today’s musical climate. Closing track Reporting, is a slab of gloom with brooding basslines and references Paris in 1874 when the tone poem for orchestra, Danse Macabre was premiered. It’s maybe coincidental but the dark sounds of both seem almost linked in some way with their scant arrangements.

A departure from Blancmange and a departure from The Maths but, somehow Fader take a shard from each project and makes In Shadow a thoroughly enjoyable album. Electronic, pop and experimental – it’s all here.