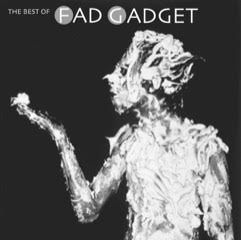 Fad Gadget: The Best Of…

Men, women and machines. Geared up with cheap electronics and grand ideas. Punk had lit the fuse but a duality was in play. David Bowie’s Low holding up as much influence as New Rose or any of that first rush of Punk albums. Then in swoops the influential buzzing beacon from Germany. A new way of doing things. A way to create your own universe without the stench of 60s influence hanging over you. Get rid of the guitar or if you have to use it use it like no man or woman has used it before. Brutalise it. Create a darkness via the synthetic rhythm of drum machines and the one-two marching vocal delivery. Create soul music for soulless times in soulless places. Bring in the shires to bash the capital. YOU CAN DO IT went the cry and many answered its call by saying “yes we can…but not like you”. No retreading of rock n roll blues yet still they crammed the storytelling and beauty of Buddy Holly into a new 3min pop song only this time chuck-a-chuck strings were now being replaced by the horny pace of drum beat. Out of this clutch of pioneers came one man who stood alone yet central to the whole movement. Frank Tovey was able to dissect the chaos of late 70s-mid 80s UK life and make sense of it for us even if Tovey’s idea of sense was upside down on a stage or covered in shaving foam like the beautiful Anton Corbijn image that makes up the cover of this best of which is now getting the full (silver) vinyl treatment for the very first time thanks to those lovely lot over at Mute records.

Frank Tovey aka Fad Gadget was a vital part of this electronically charged movement that was spawned in the late 70s with others such as Cabaret Voltaire, Soft Cell, Throbbing Gristle, The Human League and what is remarkable about this movement is that whilst genre labels were slapped onto them by the music press, each one had their own distinct sound. The Human League never went to the extremes of anti-music Throbbing Gristle and Soft Cell never allowed themselves to be painted in the colours of pop music even when they were riding the top of the charts. Then you come to Fad Gadget. Tovey followed in a long line of UK eccentrics, all wit and charisma and his music is the sound of UK culture being thrown back into your face with grace and intelligence. Tovey made pop music that was fluid and slimline. Early songs Back To Nature / The Box made him Mute’s first ever signing and it is easy to hear why. You could have heard these songs a hundred or more times but they still have the power to catch you off guard. Listen to Lady Shave again go on. You think you know it well yet even as your brain tells you this is familiar the way Tovey echoes his “shaveshaveshaveshave” still pricks up the spine and sends goosebumps up over the body.

Listen again. That is the lesson here. For what has really changed? Gun violence is still rife in the US of A so play the shadowy waltz of Saturday Night Special (in fact this song manages to poke a hole into many elements of toxic masculinity and a patriarchal society…nothing ever changes). Listen again. For Whom The Bell Tolls (featuring Alison Moyet) still sounds like Tovey is stretching the very fabric of time whilst creating a kitchen-sink drama of high intensity and black comedy. Listen again…

The original version of this best of was the last album Mute released before Tovey sadly passed away in 2002. Tovey personally selected these songs as he felt they represented the Fad Gadget name the best. This tells you that Tovey was deeply proud of his work under the Fad Gadget moniker and listening again you can hear why. Here is pop music with its hand on its hip and its tongue curled up. This is sly winks and hard jabs. Politics, sex and death..sometimes all entwined. What a legacy to have left and what a joy it is to revisit these songs once more.