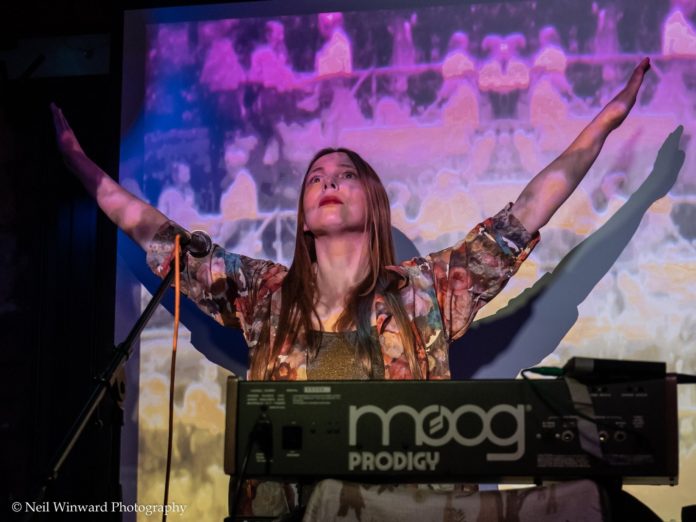 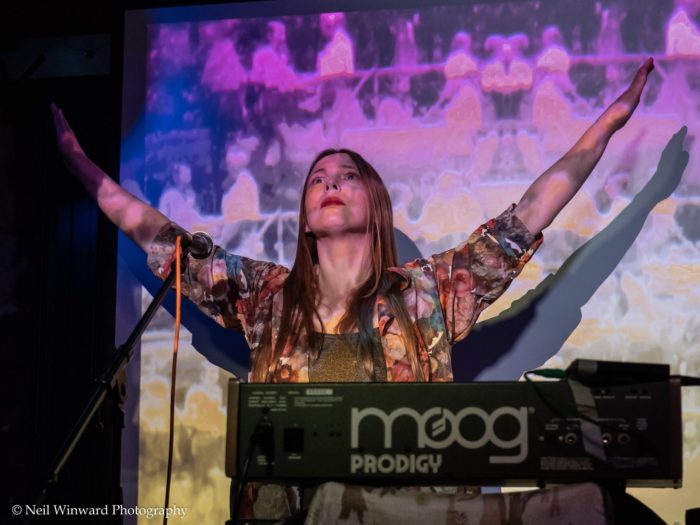 An enigmatic venue and immersive electronica were a winning combination as a trio of artists – Factory Acts, Rodney Cromwell and Alice Hubble – played The Eagle Inn Salford on Thursday 3rd October, in an evening curated by local label AnalogueTrash and London-based Happy Robots Records. 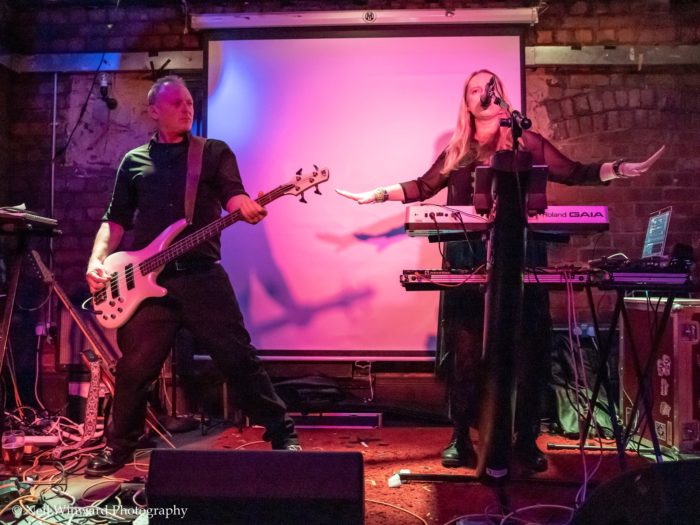 Factory Acts (pictured above) opened the evening with Signal – a track steeped in themes of uncertainty and wavering; perhaps atmospherically apt given the current political turbulence.  Strongly underpinned by a body-moving beat pattern and plunging synths brought together with expressive live bass… this was a sound capable of quickly enchanting the audience. Within minutes, many in the front of the crowd were pulsing and rolling, the vocals of SoS (Susan O’Shea) soaring, as if unlocking the emotional intensity of each syllable. This was a particularly strong set from the Salford-based duo, propelling the momentum of the evening onwards through the lush layering of electro providing a catchy core to tracks such as Leave The World to Us and Ants. One of the particular highlights, for me, was the beautiful City Song – a track that certainly deserves such a description. Reflecting on O’Shea’s home city of Cork in Ireland, this is an intricate weave of synth and bass, building to fade-out with the emotion hooked and palpable in the room. This is testament to Factory Acts’ technical skill and sensitivity – O’Shea unleashing synths and analogue flair, Matt Davies giving a bold performance on bass which was both interesting and intense. The final track Senseless, summoned up almost witch-house-esque vibes for a magic dance. 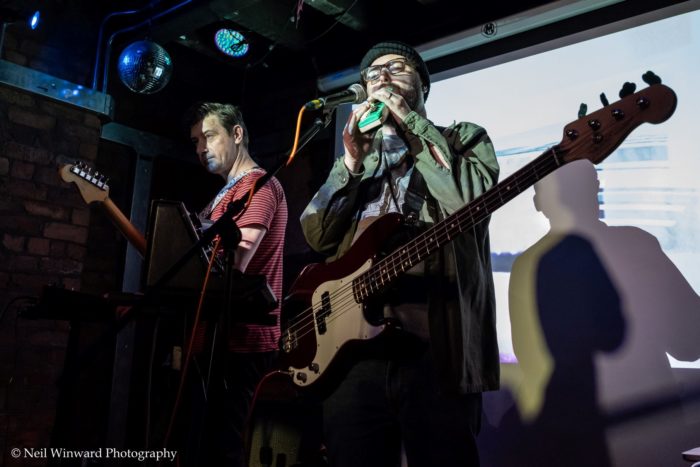 Rodney Cromwell (pictured above) followed – enveloping the crowd in evocatively-crafted, melodic synthpop; both enjoyable to move to whilst also emotively-intelligent in its depth. The music of Rodney Cromwell is moving on a number of levels; both politically-aware and personally expressive – opening up themes of frustration, anxiety and a fear in what often feels to be a ‘post truth’ society. It also makes for an engaging live experience, particularly considering the use of live melodica on stage by Adam Creswell – the founder of Rodney Cromwell. For the evening, he was joined by bandmate Martin J Langthone– and the two jammed together, creating exploratory electronica with a guitar edge that had a tightness to it, an emphasis of message. There is real emotive depth here, and thus perhaps at points Adam’s vocals could have been slightly higher in the mix … in order to embrace the full effect of what is evidently witty, engaged and sensitive lyricism. He also played a former Arthur & Martha track… this after all the music project he was formerly involved in with Alice Hubley (Alice Hubble) herself. Another personal highlight of the set was the track Barry was an arms dealer, bringing the mood of the room to a high through wit, beats and a layering of sound. This seemed ideally suited to the venue… the performance space of the Eagle after all being a former house with an old fireplace still suspended in the wall where the first floor used to be! Music arched and ebbed throughout the room, the eyes of the crowd often cast upwards, towards the tall ceiling.

Alice Hubble (pictured below) also made the most of the space with her headlining set, bringing her own visuals projected onto the back of the stage – an enchanting combination of home video and found footage filled with deep colour and recurring, atmospheric imagery. These played to the room for a number of minutes before Alice Hubley – the artist behind Alice Hubble – came to the stage; the crowd captivated by eye-opening, intense patterning, poised for a sound ready to underpin them. Alice Hubble’s entrance and plunge into the album certainly did not disappoint – clear synthesiser skill and vocals wonderfully profound in their edge of echo immersing the room. 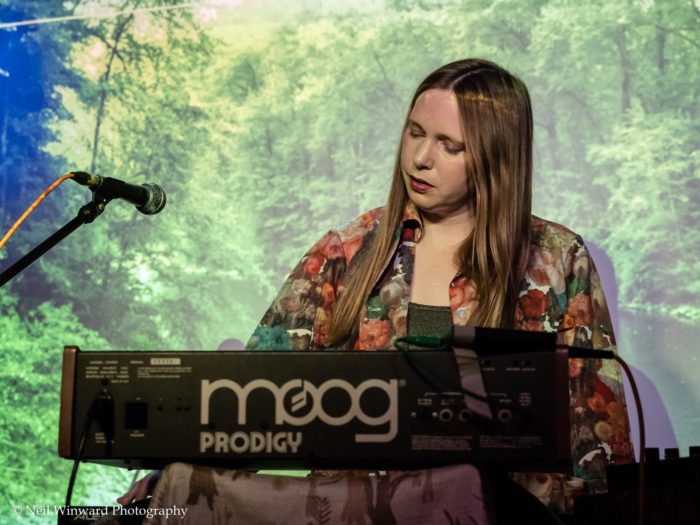 Her set unfolded almost like a lesson in escapism – and exploration is a key theme of the new album – encountering everything from the Ruby Falls of the USA, to the lush layering of Atlantis Palm. Yet this is also music which opens up encounters very much of the personal kind – and there was an intense, energy-rich feel to one of my favourite tracks We Are Still Alone. Crafted upbeat buzzes together with the emotive subject… bringing listeners together in their lonesomeness, so to speak. The music of Alice Hubble explores the nature of meaning, being and bursts with warmth and human intuition so very welcome in the synth world. Throughout the final set, emotion swelled and soared – Alice proceeding into a particularly engrossing performance of Goddess, a track gripping the room in its analogue delights – all the material on the album was devised by Hubley and her array of synthesiser equipment at home. Enchanting and enhanced by her gliding, never-wavering vocal range – the music of Alice Hubble really made for a life-affirming, eye-opening evening celebrating the very best of current electronic music; a concept that Happy Robots Records and AnalogueTrash continue to uphold.

Photography: with thanks to Neil Winward
By Emily Oldfield