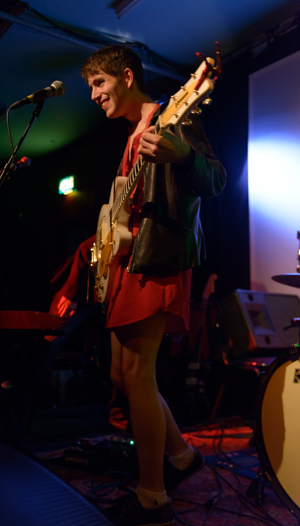 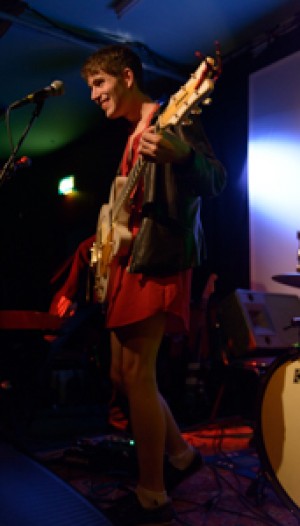 Ezra Furman & The Boy-Friends
Star and Shadow, Newcastle
5th May 2014

Quirky rock ‘n’ roll superstar in the making Ezra Furman and his band the Boy-Friends treat Newcastle to an amazing end to the bank holiday. Louder Than War’s Lee Hammond was in the thick of it for this special evening.

A late start for us this evening as the venue had a film on before the gig started but that’s by the by. Taking to the stage not long after the doors opened Ezra Furman in his drag regalia, full of beans as we’ve come to expect from this lively rock ‘n’ roller. Wasting no time in getting stuck into his awesome repertoire of exciting tracks.

With another album tucked safely under his belt, rave reviews and critical acclaim aplenty, it’s understandable that Ezra is floating on a cloud. His giddy stage persona is difficult not to enjoy, squealing with glee between tracks before launching into yet another jangly anthem for this evenings crowd to sing along to.

Ezra’s good cheer rubs off on each and every member of the crowd there’s not a single person who’s not smiling this evening, such a rare sight at any gig now. Tracks like Caroline Jones are met with huge crowd response the crowd singing back every word, with Ezra’s ever improving mood he keeps shrieking about how much of a great time he’s having. That’s echoed completely by his band that looks to be having an equally great time.

There are some tracks that have much deeper meaning, tracks like I Killed Myself But I Didn’t Die. The happiness of most Ezra’s music seems to have been tinged with a deeper undercurrent, but this can often be lost in his persona and his happy behaviour. A perfect exponent of this undercurrent is Take Off Your Sunglasses, where his lyrics are about how he’s not worthy of the female in the track. 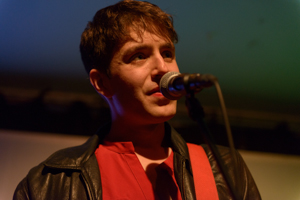 Even most popular track of the evening My Zero has an underlying theme of loss about it. Its not until you read between the lines and strip back the happiness of Ezra’s persona that it reveals a truly brilliant heartfelt lyricist. Heightening our feelings of passion towards this guy’s music that little bit more. The mood is picked up with his covers of Mr Postman and to close out The Clash’s Train In Vain.

This evening has been truly brilliant. Ezra in his own words is trying to set himself apart, he’s doing it not just by wearing a dress but through his well crafted lyrics and brilliant musicianship. Ezra Furman is a huge talent with an obviously huge heart, an element which he wears on his sleeve throughout his performance and in his music in general.

Its plain to see he is gathering an adoring following by the reaction when he leaves the stage this evening, every member of the crowd stood firm and screamed, stamped and yelled at the top of their voices for more. However, all great things have to come to an end, we leave the venue full of glee, despite it being rather late and miserable outside that doesn’t dampen our spirits in the slightest.

Ezra Furman & The Boy-Friends can be found here. They can also be found on Facebook, Twitter and Bandcamp.

All words and photographs by Lee Hammond. You can check out more work by Lee by visiting his Louder Than War Author’s Archive here.