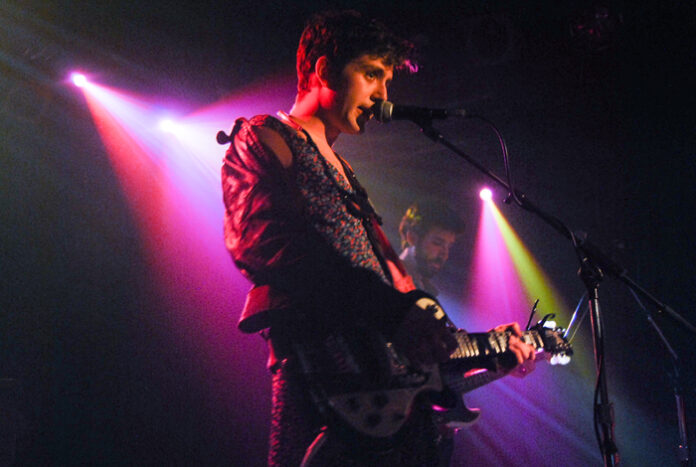 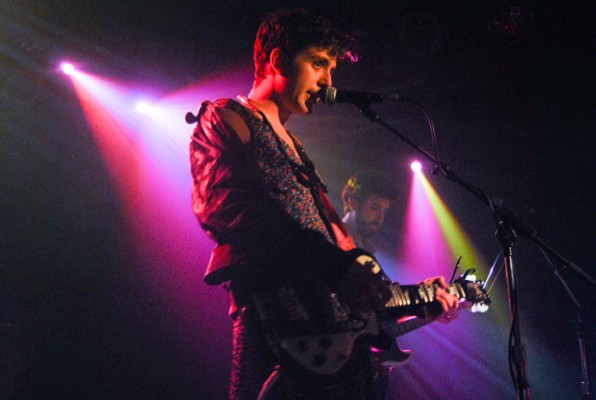 Band on the Wall, Manchester

Ezra Furman, purveyor of “glam and a fuzzed out soul / psych mutant slop” has been on tour for most of Sept, a tour which included a show at Manchester’s Band on the Wall on Monday which Louder Than War’s Nathan McIlroy was at. Check out his review below.

POST are a Manchester based group fronted by Graham Wann, a guitarist who cut his teeth in Scottish bands Bricolage and the Sexual Objects. For any student of the Glasgow School, the Postcard Records references are impossible to escape but POST are the realisation of many disparate influences which sets them apart from such labels.

They have a fluctuating line up and perform as a four piece tonight with a spacious sound that fills the room. Part Time Jewellery Maker and Rabbit in the Headlights are 100 bpm Northern Soul stompers with refrains that etch themselves in your memory; a trait which continues throughout a set that’s packed with memorable hooks.

They play most of their debut album Calvacade and are confident enough to omit their first single New Play Thing and still win the crowd over with ease. The song received extensive 6 music coverage and would have no doubt have been familiar to most of the crowd who were introduced to the headline act through the same station.

Feedback on A Concrete Wall and Metro Camel are instrumentals which could be out-takes from Bowie and Iggy’s Berlin sessions. Monument to a Lost Cause is brutal in its description of a house party full of charlatans, offset by sorrowful music, a treatise on a city packed with musical has-been’s from a group that are elevated above the average white band. Their newer tracks remind me of doo-wop ballads interrupted by J. Mascis freak outs and there’s talk of a new album out on We Can Still Picnic records which, on the strength of tonight, could be even better than its predecessor.

In short, they cram as much melody in a song than most bands have in their back catalogue. Do yourself a favour and get acquainted.

Just when you thought that rock and roll had exhausted its options, a cross dressing waif called Ezra appears with smeared lipstick, star quality and songs that back up the persona.

Taking cues from every great the form has ever produced means that he will undoubtedly straddle a fine line between homage and pastiche, but any doubts of the latter are relinquished after tonight’s show. There are aspects of Ziggy Stardust era Bowie, the E Street Band and the Violent Femmes in his music as well as the magic beans of rock and roll; the holy triumvirate of country, blues and gospel.

His backing band, the Boy-Friends, are serious players who understand the importance of nuance, dynamics and that long forgotten requirement of music  – fun. Their saxophonist is superb recalling a classic style that tips its horn to The Sonics, Flesh Eaters and Clarence Clemons. Likewise, the rest of the band are well steeped in musical history and know when and when not to play.

Between songs, the crowd fall into hushed reverie awaiting word from their exalted preacher. He charms them without the predictable clichés that are the usual currency of an American band passing through England. It was enthralling to watch a gig of this calibre in such a small venue. The show seemed to be one that was packed with hits even though he’s still relatively unknown which could indicate a steep surge in popularity in the near future.

The Year of No Returning and Day of the Dog have already received rave reviews and put pay to claims that the album is a format nearing extinction. Whether it’s songs about his fragile mental health (I killed myself but I didn’t die) or listings creatures on the sea bed like a rabid Frank Black (At the bottom of the ocean); there’s no filler to avoid.

There’s also the singles My Zero and Day of the Dog which would easily carry a career these days. The latter is steeped in the emotion of someone who studies the Gospels and it’s no surprise to hear that Ezra is devoutly spiritual. In the same way that Jerry Lee and Daniel Johnston struggle, be it religious eccentricity or otherwise, Ezra Furman is channelling a higher power whose existence you can either doubt or truly believe in. To his growing church of believers, rock and roll is very much alive.

Ezra Furman’s website is here. He can also be found on Facebook and he tweets as @ezrafurman.

All words by Nathan McIlroy. More writing by Nathan can be found at his author’s archive.