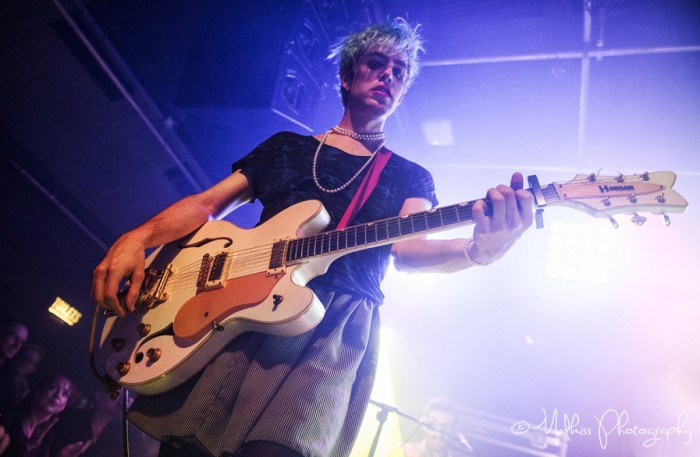 Tonight the dark underground of Manchester’s Gorilla is packed to the rafters. It feels agitated and expectant. The tiny basement under the giant railway arches seems too small to accommodate everyone eager to see Ezra Furman, alchemist of rock’n’roll history and champion of outsiders. The gig has been sold out for weeks and the fans are crowding around the stage way before the arrival of their improbable pop messiah.

And then he suddenly appears:  blue hair, blood-red lipstick, wearing a cute grey skirt and a string of pearls around his neck, looking exuberant, if somewhat frightened and shy. “Hello,” he says playfully. “Let’s begin with a song by the Velvet Underground.” He dives nose-first into ‘Rock & Roll’ and for the next hour-and-forty-minutes it’s a defiant music carnival taking in Bo Diddley beat, sexy sax licks, Dylan-esque bluesy folk, garage rage and yelping rambunctious punk frenzy. 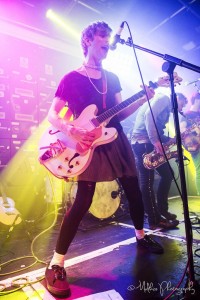 Three songs in he stops knowingly and, with a coy smile, tells a story of his personal connection with Manchester. In 2013 he released an album Day of the Dog. Back home in the US, “nobody cared and nobody came to the shows.” The album was getting a better reception in Britain, and so it was, “OK, I’ll go on tour in the UK. I’ll do that and then it’s all over.” But the first night of the tour brought him to Manchester. It was special and he started to doubt his decision to quit music.  Or, as he neatly puts it himself, “it took Manchester to convince me not to give up music.” The room explodes with a roar of pure heartfelt joy and genuine affection.

Although the band, provocatively named The Boyfriends, is undeniably well-rehearsed, Ezra’s unpredictable escapades radiate a chaotic manic energy rarely seen at gigs. He is the kind of performer who wakes you from the slumber of watching well-drilled (still) live shows. Witty, subversive, troubled and a little cryptic – just like his stage antics – Furman’s banter is refreshingly improvised and exciting. At times it feels like he is not entirely sure where he’s heading but this thrill is also part of the appeal, possibly for Ezra himself as much as for his audience.

He doesn’t mess about, delivering with unflinching yet vulnerable honestly songs about depression, struggles with gender identity and “wanting to leave society entirely to go and live under the ocean”. Perhaps not all-new songwriting subjects but in the case of Ezra Furman, it’s catchy pop tunes delivered in a sassy, messy stage display. Alongside ‘Lousy Connection’ and ‘Restless Year’, the latest single ‘Body was Made’ gets a very vocal welcome. Tracks from Day of the Dog get a good airing, with a raw post punk onslaught of ‘Walk on in Darkness’ and early 60s rock’n’roll of ‘And Maybe God is a Train’ instantly grabbing the crowd’s attention. 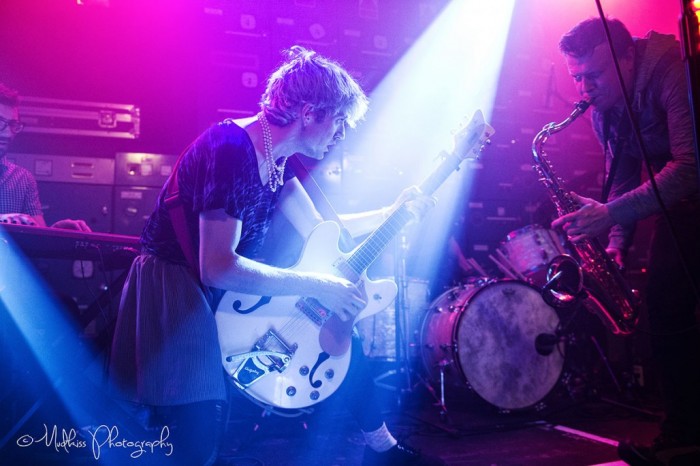 “We’re all out for something. We’re out for transcendence. That’s why you showed up,” declares Ezra at the end of the gig.”I wanted transcendence from the start and fucking got it!” And maybe he’s right. Many regard him as a cult figure, someone simply too interesting (i.e. not sufficiently bland) to break through into the mainstream. But tonight, when Manchester once again gives Ezra Furman its blessing, it’s clear that this unlikely hero is one of the most current and unmissable artists. What’s more, tonight he looks like someone who can transcend the boundaries of cult status into the heady horizons of big-time fame. Let’s just hope he returns to Manchester on his future arena tour.

For more information about Ezra Furman and to buy Perpetual Motion People visit https://ezrafurman.com. He can also be located on Facebook and Twitter.

All words by Anastasia Connor. She also tweets as @Lidl_Donkey.
All photos by Melanie Smith – Mudkiss Photography. More work by Mel on Louder Than War can be found at her author’s archive. You can find her on Facebook and Twitter. Photography portfolio can be found here: mudkissphotography.co.uk.