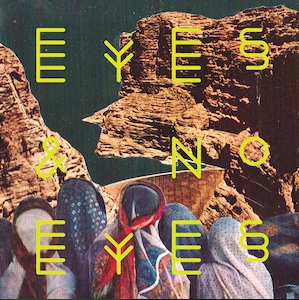 Recorded live in the studio, this debut album featuring guitar, bass, drums, cello and all sorts of weird and wonderful electronic squawks and gurgles as well as “found sounds” is finding difficulty in leaving my turntable at the moment. Knowing next to nothing about the band, it was a pleasant surprise to hear a record that is complete and works as a whole whilst holding on to its inherent melody and tuneage amongst the intricate instrumentation, punishing guitar and the ghostly, otherworldly electrical storm.

Whisper it, but we may have discovered that prog is not, in fact, a four-letter word after all. Pure Reason Revolution were much mourned following 2010’s split in my house and I suspect we may have found the new pretenders to their throne.

Opening song Breathe In begins with skittering drums and some beeps and swooshes from co-conspirator Woodpecker Wooliams. The electronic maelstrom actually sounds like barking dogs in some dystopian nightmare before the song kicks in proper. And what a song.

Clanging guitar chords herald a build-up that recalls 154-era Wire. Vocalist Tristam Bawtree does a fair impression of a Krautrock veteran and the song climbs into a tense, sensual  frenzy before a volcano of fuzzed-up mind-melt comes a-calling towards song end. The cello flourishes throughout from Becca Mears give an aching melancholy that sits beautifully amongst the punky chop of the best of the album.

Autocrat is led by an enticing bass figure counterpointed with Mears’ cello. Again, the song builds to a climatic storm; the needling groove gives way to a neat cello passage to end and Bawtree’s vocal has an insistent, folk-y drawl.

There’s a real just-woken feel to Hidden Thieves: it’s martial drumming and grinding bass have something of the dream-state, hallucinogenic quality of Sonic Youth’s Imperial period.

Idiot Icarus (great title, that!) opens with Bawtree’s voice and staccato guitar before resolving into a picked figure and some spooky sounds. About three minutes in, it evolves into a minor key, echoing epic.  Shoegaze, anyone?

The Drowned World is another insistent, climbing cloudburst; I would have liked to have heard Bawtree’s voice twinned with a female backing singer at times although the ethereal quality of his own vocal is a beacon throughout the album.