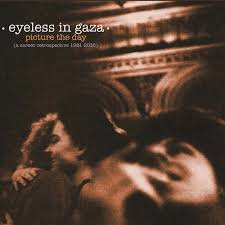 2CD first complete career overview of the foot soldiers of “The Golden Age Of Independent Music”, looking at their 20th century Cherry Red recordings and their later work on the self established “Ambivalent Scale” label in the new millennium…..LTW’s Ian Canty finds a duo possibly sold of little short when being written off as raincoat-clad indie miserablists or merely an “acquired taste”……

If there were such a thing as Music Hall jokes in the 1980s “Alternative” scene, you can bet good money that Eyeless In Gaza would have been the punchline for one of them. Archetypal small label no-hopers to many, though I wonder how many people actually bothered to listen to them in the first place before drawing that conclusion? They were an easy enough target with a media profile that made JD Salinger look like Jordan (not the Punk one either) and a sound that often could appear depressing and slightly weedy on the first hearing (but you could say the same thing about the Smiths….speaking of whom….well perhaps a bit later). Naming themselves after a Aldous Huxley novel, Eyeless In Gaza came together during 1980 and have been in existence for most of the ensuing years, following their own path wilfully and without much fanfare, but with a small but solid fan-base that stuck with them through it all.

The fact that they were hard to pin down probably didn’t help counteract the detractors much either, being not exactly in the mode of the flavour of the month Post Punk sound of the outfits cribbing from Pere Ubu and PIL, a little bit on the Gothic side but not enough to really have them aligned with the Batcave Glitterati and having definite leanings towards the Folk and Art Rock scenes of the recent past that were still decidedly taboo in the hip polite company of (for instance) your Rough Trade/NME gang at the time.

So the pair of Pete Becker and Martyn Bates found themselves occupying a very exclusive patch of terrain and luckily they signed up to the patient and understanding Cherry Red Records who were willing to let Eyeless In Gaza just get on with being themselves and doing what they wanted. Repaying the faith the record company had in them, Eyeless had many Indie Charts hits in the early part of the decade before a temporary split derailed things for a time at the end of the 80s.

All of which resulted in a low-key career split into two phases either side of the dawning of the 21st century, which is presented here over two discs.

Now I wouldn’t expect anyone new to the portfolio of Eyeless In Gaza to go ga-ga over everything that is featured on here, in fact there are a few underwhelming tracks in truth, most of which fall into the “interesting” bag but are unlikely to get repeated airings. They experimented a fair bit but when at their best they had a sure pop music knack, which accounts for the best tracks presented here. Thinking about bands they may share some common ground to give the uninitiated something to go on I can only really name the Smiths (the quieter, slower songs), a bit of Kirk Brandon in the voice and Psychedelic Furs (though nowhere near as poppy) maybe. Comparisons are difficult and Bates’ voice is one that you will either like or not that is for sure, but if you can live with that they actually had much to offer.

This new collection offers an easy way into the world of EIG. First single “Kodak Ghost Run Amok” is like Theatre Of Hate recast as an electropop outfit, “going haywire” as the outro chant has it. “At Arms Length” is more in the area of the second Teardrop Explodes album “Wilder”, but the experimental Jazz dabbling of “Falling Leaf/Fading Flower” is the flipside to their more pop moments, a slow moving and sparse instrumental. “Back From The Rains” feels very early period Smiths for me…tapping into the same emotions as say “William It Was Really Nothing”…..”the rain comes down on a humdrum town” indeed! The Cherry Red portion features the most widely known efforts of the band and shows a genuine playfulness that is refreshing. At least one band soon to record on 4AD must have been listening to selection number 19 “Pale Saints”.

Moving forward to the second half of this compilation, we meet Eyeless confronting the 21st century mostly (though three stray tracks from 1995 also feature), now recording on their own Ambivalent Scale” imprint that their debut single emerged on all those years before. They do seem to have moved a little closer towards the mainstream as time has gone on, or maybe it is just that the kind of gentle indie pop that they dabbled with at times had become more accepted along the way. Even so “Whitening Rays” has a pinch of the scratchy guitar with the feel and the thrill of their Post Punk days, but the filmic, show-stopping “Endless Trees” was now more typical of their palate in these more up to date times. “Where Vivid Bloomed” is euphoric, epic sounding music and they even dip their toes in shuffling dance beats on “Tamarisk” . Given the passage of time this is perhaps the more cohesive of the two discs here and this makes for good listening even though they may not have been taking quite the risks of the previous years. It all adds up to a good enough showing for a band now into their fourth decade.

Together with a booklet featuring an extensive interview with both band members, this is a very decent introduction to the low-key, often lo-fi world of Eyeless In Gaza. If you feel sufficiently brave to try it, it may well find yourself pleasantly surprised.