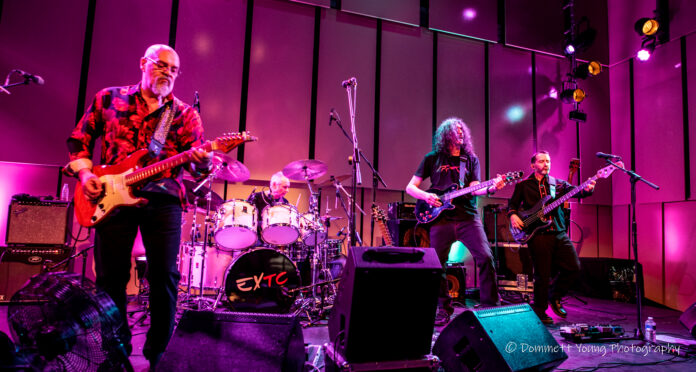 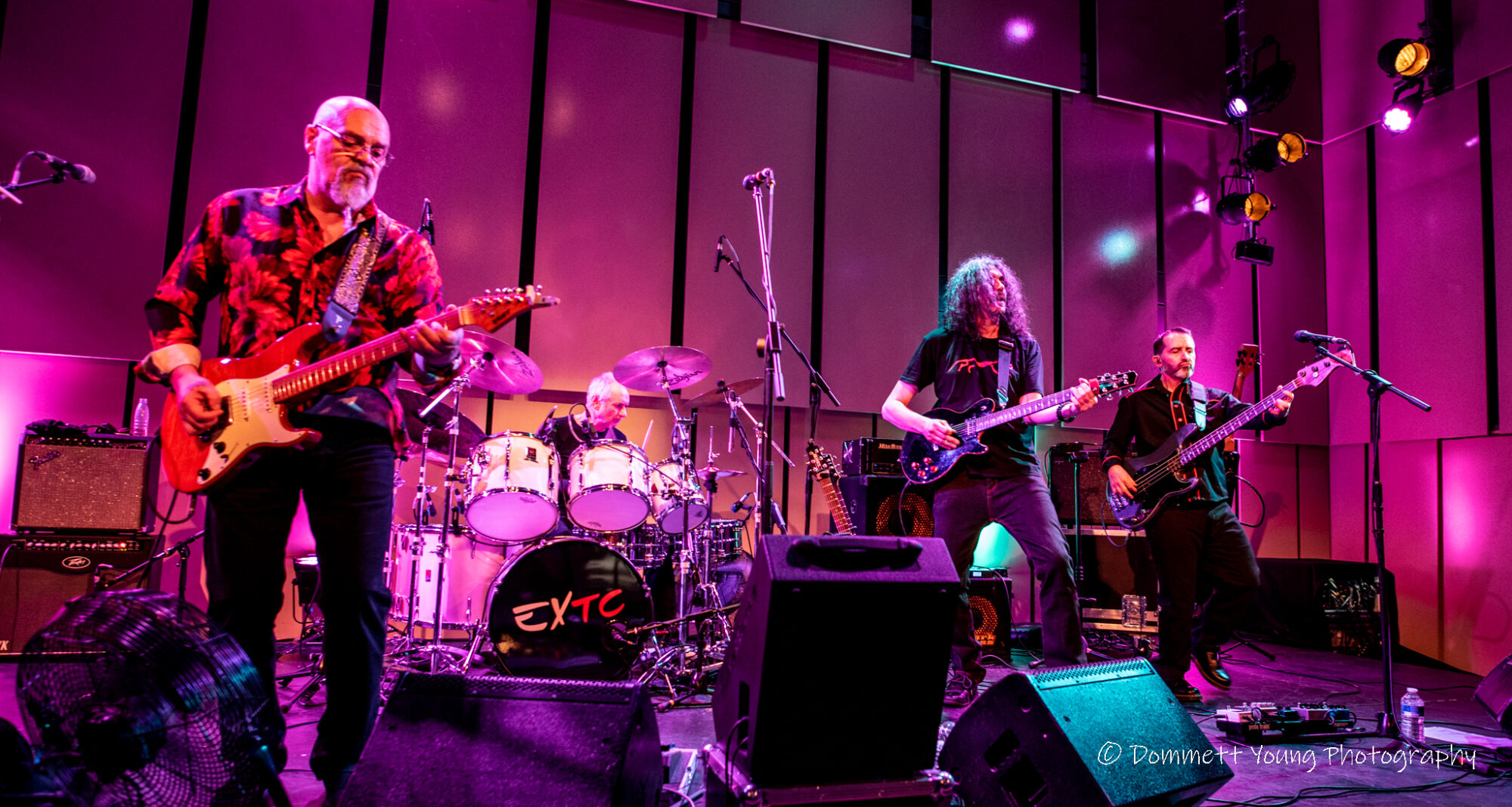 Legend tells us that Moulding and Partridge, the Merlin and Arthur of British Music, haven’t left us but sleep soundly in Avalon (or Swindon) until Albion should need them again, when they will rise up to save us. In the meantime, Sir Lancelot, in the shape of Terry Chambers, has wrestled Excalibur free from the stone and is about the land with his group of Knights in Shining Karma to deliver musical salvation for the long-suffering people. And lo, how they perform the alchemy of turning a grim February eve into a night of shared laughter and joy.

I must confess, I’ve found it a lonely business being an XTC fan. Save for the sterling work of Mark Fisher with firstly Limelight and now the What Do You Call That Noise Podcast, you can feel isolated. Why? Well, simply because they haven’t played live in the UK for 41 years; last gracing this venerable bastion of musical heritage which is Liverpool, in the University, May 1981. My belief is that music is to be shared and that songs only truly come alive when shared with an audience. Whilst I’m at it, the audience are just as important in that experience as the band, and any artist who disagrees should try playing to an empty room a few times and see how that feels.

Well, no empty room tonight, in fact the room is virtually full, of people and expectations. Tonight’s venue is just a cock stride from where XTC last played in ’81 and much of the audience would have been there. No doubt many were also at the legendary Eric’s where so many memories were made in the late ’70s, and I find myself wishing that a box could have been left at the door, not for suggestions but for memories. Whatever, it’s great to be in the company of so many who share a common love of music.

EXTC were born from the TC &I project that saw Terry Chambers reunite with Colin Moulding for an EP and a string of live shows in Swindon in 2018. When Moulding decided he did not wish to continue, Chambers seized the day and, with fellow TC&I live show member Steve Tilling, set about putting together a live band to take the XTC songbook on the road.

So, the welcome given to the band as they take the stage has been many years in the making and the primal roar that accompanies the unmistakable opening of This Is Pop is unforgettable. Straight into Statue of Liberty and then we get our first glimpse of the strength of frontman Steve Tilling with a spine-chilling version of No Language In Our Lungs from The Black Sea album; a drum-driven monstrosity that showcased the classic XTC line up at their most omnipotent. That’s the thing with XTC; taking a band on the road to play their classic songs live is all well and good in theory, but you need balls of steel and real ability to pull it off as their material is painstakingly hewn from the less obvious seams of popular music. Trust me, Tilling has the balls (presumably) and the ability to carry this off. And he does it whilst clearly loving every second he is up there. To experience an acoustic version of Dear God was something I haven’t bargained on and it duly sends a chill down the spine. Looking around, it’s clear that the whole crowd is word perfect on this, as they are with all the set tonight.

But now we come to Terry Chambers, the sole representative of the XTC line up here to enjoy the night with us. Having seen him previously with TC&I, I know he’s phenomenal, but watching him tonight it’s clear we are seeing a true master of his art and one of the all-time greats in action. Producer Hugh Padgham cites Terry as his favourite ever drummer, and when you look at the list of artists he’s worked with (including The Police and Phil Collins) it should tell you something. Poised over his kit like a Terrier watching a rat, Chambers is mesmerising, making judicious use of his range of toms and cymbals and ending each song with his characteristic stick spin and smash of the kit. He is a true marvel and you can’t help but dream about how a new XTC album would sound if only they would. Never mind eh.. 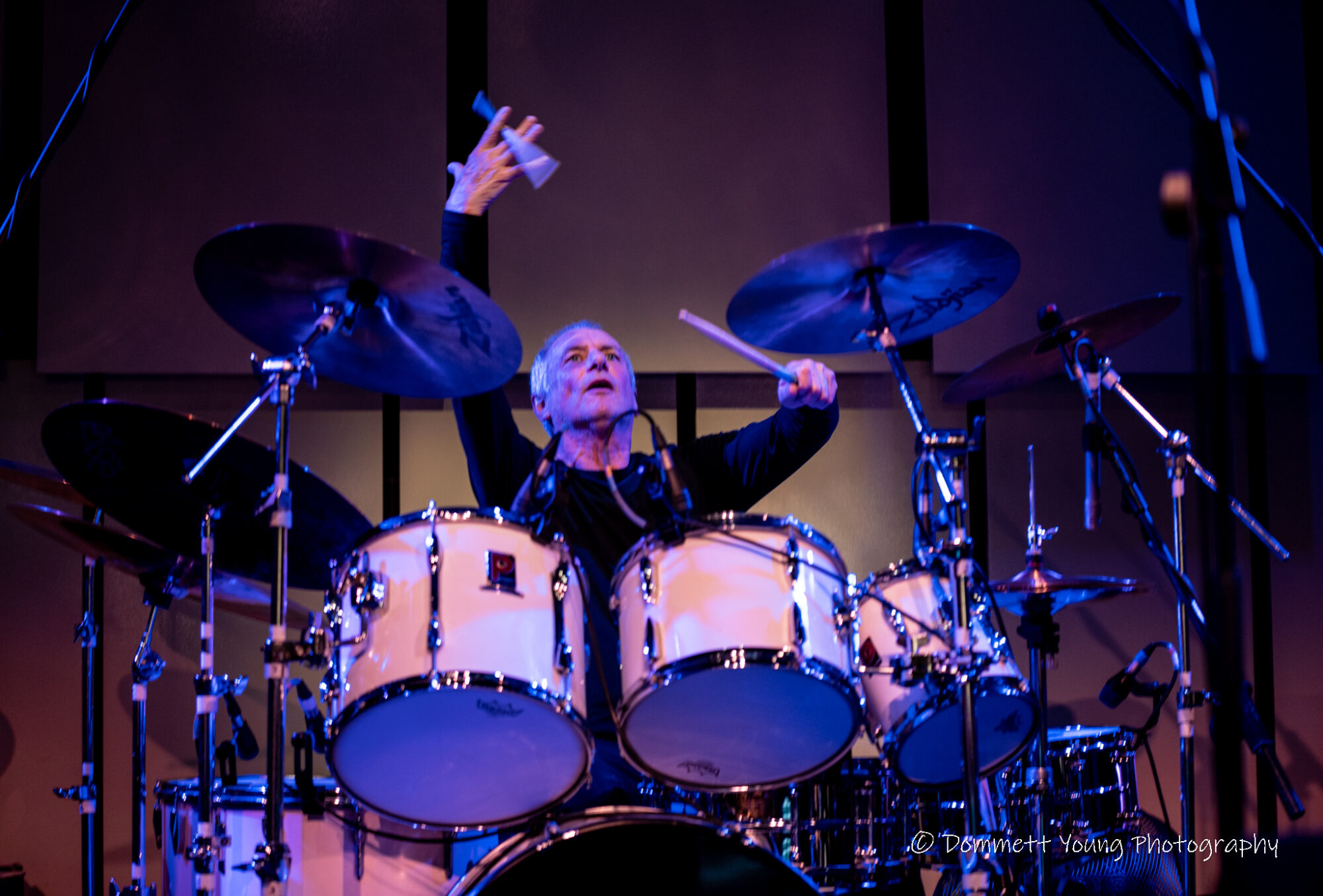 The myth that XTC could not play live in their later career due to the complexity of the songs is firmly nailed here, as a career-spanning compendium is served up for our delectation. Classics like Ball And Chain and The Ballad of Peter Pumpkinhead are served up alongside the lesser spotted gems like Standing In For Joe, Grass and the storming version of No Thugs In Our House. We are even treated to the obscure beauty of Where Do The Ordinary People Go and the sublime TC&I Track, Scatter Me; described by Colin Moulding to me as the best song he has ever written.

The timeless brilliance of Respectable Street followed by Generals And Majors, both turning into community singalongs, bring the set to a rousing climax. What a crowd. What a night. The encores continue in a similar vein; two of THE great singles in British music, Making Plans For Nigel and Senses Working Overtime. Both quirkily unique and both with the sort of drumming you would crawl across a desert for, delivered by the Daddy of the Tubthumpers. Stupidly Happy is a great song and well-performed, but maybe it would be better tucked earlier into the set as the energy level needle dropped from well into the red zone to normal very quickly. However, who could resist the closing offering of Life Begins At The Hop? No one in Liverpool that’s for sure.

So ends an amazing evening of “performing that miracle, raising the living”. I would argue that it is also an incredibly important evening simply because of the low level of exposure of XTC, a band who were elusive enough when they actually existed, but now have become almost like the frustrating breeding pandas of the music world. We can huff and puff as much as we like but we’re not going to blow the resistance of Partridge and now Moulding down. However, these songs need to be heard live, to be shared with people who love them, and full credit to the good men of EXTC for releasing them from their confinement. To see EXTC is to spend the best evening in the best company and, given the chance, you really should go. If King Arthur and Merlin were ever to wake, they would be pleased to see how the good folk of Albion remember them.