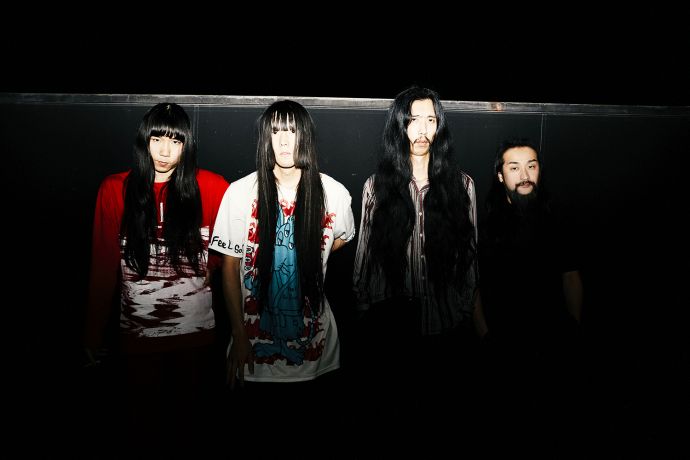 The Frisian capital Leeuwarden is currently the European Capital of Culture. Part of this wider celebration is Explore the North, a multidisciplinary festival with the accent on music and performance. As is the nature of the modern day festival, ETN has arranged some surprising collaborations, not least of which is Japanese rock monsters Bo Ningen paired off with Frisian sound poet and thinker Elmar Kuiper. They are currently cooped up in a church working out their gig to be performed Friday 23 November. Louder than War got to speak to both.

What happens when two creative opposites collide? At first glance, and if we believe biographies, it’s hard to see two more radically different approaches to making music joining forces at Explore the North. On the one hand we have Bo Ningen, a powerful and often extremely loud Japanese four-piece noise rock band, drawn from all over Japan but now resident in London. Then we can point to Elmar Kuiper, a bilingual Frisian writer, poet, performer and playwright whose work often investigates the interface between the Dutch and Frisian languages. Though an experienced and flexible performer, and certainly no shrinking violet on stage, Kuiper’s work can often be reflective and dealing with internal matters. Whereas Bo Ningen are adept at summoning an elemental, often overwhelming force expressed through sound. An expressive approach that is very much about a creating a frenzied experience. Further intrigue to the collaboration is added in the setting. The Japanese rockers and Frisian poet will be based at the redoubtable Westerkerk in Leeuwarden, a week before the festival starts. After a week of finding a mutual creative path, they will then perform the fruits of their labours on Friday the 23rd November, 23.30 – 00.30 in the Grote Zaal at Neushoorn.

It’s going to be interesting to see what happens, both in the church and on the stage. Louder than War grabbed the chance to talk to both artists, albeit under different circumstances and at different times. We’ve kept the interviews apart to let you the reader guess where the artistic faultlines and approaches between these two acts will produce the best results! 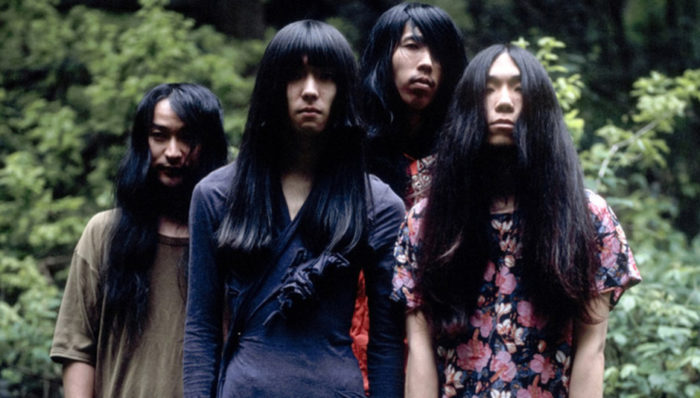 Bo Ningen are Taigen Kawabe (vocals & bass), Yuki Tsujii (guitar), Kohhei Matsuda (guitar) and Monchan Monna (drums). They are a nomadic band in spirit who go where the shaman’s drum dictates.  And the interview was – typically – conducted on the bus between London and Glasgow. And, typically, the band answered our questions as a collective.

LTW: You must get lots of offers to do these kinds of thing. What is the most important thing about collaborating for you?

Bo Ningen: We think collaboration is like a journey towards somewhere you haven’t been, although with someone else. We want to make sure that both we and the collaborators will learn and find something new with each other.

LTW: You are city kids going to deep farmer country! Do you like travelling to places like Leeuwarden?

LTW: We love travelling, like everyone does. And it’s always fun to explore somewhere we’ve never been, especially when it’s somewhere more local and different and authentic.

LTW: You have done some high profile collaborations: I remember the startling ones with Savages from a few years back. When both bands played together it felt like a real creative stand off – a great battle of attitudes or worldviews. What do you remember from that?

Bo Ningen: That was one of the most exciting collaborations we’ve done. We composed the songs and the concept together.  But there were so many spaces where we could improvise also (in our work). We could feel the many forms of chemistry happened in the studio but also with the live shows.

LTW: I imagine Bo Ningen being a band who invoke a feeling or situation before you actually make music. Are we right?

Bo Ningen: Not really! I’d want to think it’s our music that invokes a feeling or situation. Not us as people.

LTW: The Westerkerk in Leeuwarden is a solid old Protestant church. How are you going to approach the space?

Bo Ningen: The acoustics in this kind of space are quite different from what we normally know, so that’s the first thing to consider. But we would hopefully make the most of it and that the performance becomes sort of spatio-temporal experience.

LTW: But churches can have notoriously uncontrollable, moveable soundscapes. The sound bounces around. How will you approach and control that?

Bo Ningen: A church itself is a unique structure. It may feel like we’re playing in an organ of a giant of energy, light or knowledge! Probably the finished work with be a reflection of the dialogue between Elmar, Bo Ningen and the church. We could make three dimensional sound using words, sounds and resonance, and in doing so reach a fourth, even fifth dimension.

LLTW:  You do like to rock out as a band, to “search and destroy”!

Bo Ningen: Sometimes we need to destroy a preconceived idea to make new work. It’s always helpful when creating and it’s a very positive process, like a catharsis.

LTW: Tell me about the link with Elmar. What do you like about his work?

Bo Ningen: As we’ve collaborated lots of different artists in different fields before, we find it very inspiring creating a piece together with someone manipulates words. Poetry has always been the core of the history of the human arts, in different times and in different languages. The voice is the most primitive instrument in a way, and it’s very inspiring for us to perform “through”, and collide “with” it. 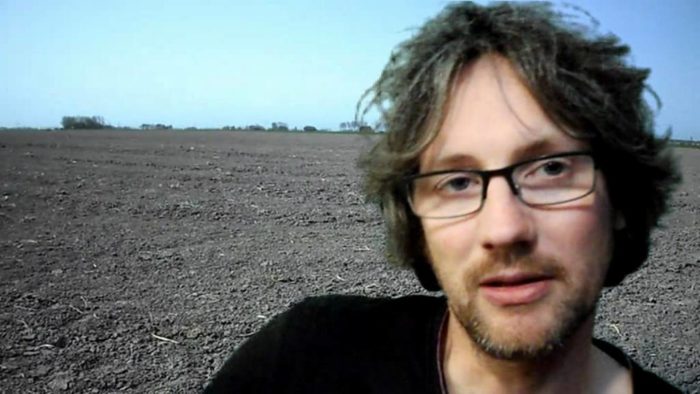 A man who splits his time between his work as a psychiatric nurse and his diverse artistic practices, Kuiper is no stranger to working in the moment. Even so the Frisian poet maybe has the harder task in interpreting and guiding the racket made by the Japanese band. Kuiper, often a busy man, took time to reflect about the coming collaboration in an email.

LTW:  Elmar, tell me, how on earth did a collaboration between you and Bo Ningen come about?

Elmar Kuiper: I was approached by (fellow poet) Marleen Nagtegaal. She has seen me perform a few times, and she knows that I can convey the intensity of my poetry well in a live setting. So I don’t see it as a coincidence that an intense band like Bo Ningen is linked to me. Rather, that is a cosmic law. I also have the necessary stage experience, as I sing in the band, Tigers fan Greonterp and am part of the improv collective, Tsjinlûd. And years back, I performed with De Zoete Hanen. So, you can see I really like improvising. The main thing to remember is to listen, and do something at the right time!

LTW: How are you – poet, performance artist and thinker – going to straddle the huge noise Bo Ningen will make?

Elmar Kuiper: By listening carefully and striking at the right time. That is to say, by doing my thing. Maybe I find myself completely absorbed in the craziness of the music and I perform a ritual dance on the spot. Maybe I’ll roar out loud, or declaim a poem. I just don’t know. Frisian is a primal language and lends itself perfectly for this kind of situation. What I do know is that I will meet and practice with the guys. I’ll bring my old analogue Roland synthesizer (made in Japan). Cruel sounds come from that instrument. When we perform, I want to start very softly, in a whisper. But it may well be very different.

LTW: And in a church, a solid protestant Leeuwaarden church of all settings.

Elmar Kuiper: My grandfather was a minister and my father was a born orator. It’s there in the blood. The public performance is in De Neushoorn, so that will be a different vibe. But when we play in the church, I’ll put on my Sunday suit.

LTW: I’m interested in the noise the band will bring, as it feels like it could be an alien element in the pastoral Frisian landscape. Or are there hidden noises we should know about up there?

Elmar Kuiper: It would be wonderful that this alien element you talk about has such an impact that it seduces all the aliens in space to pop down and take a look. That a spaceship lands at the Ruiterskwartier…

..Putting ideas of “craziness” to one side, I really like artists who dare to be pioneers. As a 12-year-old boy, I absolutely loved Gary Numan’s ‘Are Friends Electric’. The space and the atmosphere in that number; I’m still blown away by it. (Sadly) you note that a sort of Calvinism hangs around many current bands in this country, even though this Calvinism is disguised in a shiny new jacket. Gah; I don’t want all these balanced notes, good, decent, measured riffs or pious voices. Everything has to be sanded down nowadays.

Explore the North, in cooperation with Lân fan taal, has created a special Focus on Japan programme, which not only features Bo Ningen and Elmar Kuiper’s showcase, but also Anchorsong and the Frisian string quartet Risata Kwartet, and Sundays & Cybele. The interview is also published in Frisian paper, De Moanne.