A local music promoter Fat Out Till You Pass Out is firing-up an Easter weekend festival like no other – in the form of A-Bound at Islington Mill. Starting on Wednesday the 23rd and extending till Sunday 27th, it’s set to be 5 days of unorthodox, interactive music and art. Emily Oldfield was keen to find out more and how YOU can get involved…

Manchester is known for doing things differently, and A-Bound proves it’s no exception when it comes to music festivals. Rather than hogging the heights of Summer like the screamed-over ‘Leeds’ and ‘Reading’ Festivals, Manchester’s A-Bound makes March the month for mysterious, genre-defying creativity. It is set to involve collaborators from across the country, all part of Fat Out’s ‘Phase Two’ of artist residency at the iconic Islington Mill. This atmospheric red-brick venue was built with an ethos of experimentation in mind; ideal for this extended Easter weekend of the weird and wonderful.

With acts as diverse as Dutch Uncles and Kink Gong, to a ‘Love Each Other or Die’ line-up, there is sure to be something strange enough for everyone. As Fat Out’s Co-Director Emma Thompson reflected:

“It’s about producing a program of artists that are entwined into our creativity, putting us out of our comfort zone and producing a festival that attracts a diverse range of audiences. What to expect from A-Bound … a fucking ace 5 day party for one! I hope people leave A-Bound feeling that collaborative spirit. It’s not just about the music…there are workshops, installations, art performances to get involved in. There is a real interactive element to the festival.”

Fat Out has co-ordinated the event by picking other promoters from a range of cities; especially those known for their experimental, bold attitudes to music. With Now Wave (Manchester), Cacophonous Sarcophagus (Bristol), High Hoops (a London-Manchester collaboration), Optimo Music (Glasgow) and Supernormal (Oxford); these are cutting-edge promoters bringing creative artists from every edge of the musical spectrum. Coming altogether as A-Bound, it’s set to be a weird and wonderful experience, with everything from androgynous Indie-pop to trippy techno. And there’s A BIG OBJECTIVE in mind too – breaking boundaries.

Now Wave is a Manchester based promoter ready to push against convention, out of love, rather than any kind of obligation. 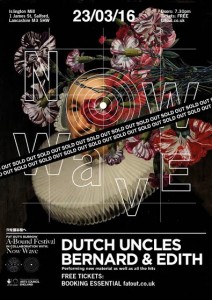 “Unlike David Bowie and Queen we felt under no pressure,” A spokesperson told me “It’s a pleasure to present two of our favourite Manchester acts – who have come through in the last few years with something new. It’ll be exciting to hear them play many of their new songs for the first time at A-Bound as well as all their hits. We’ve always been massive fans of Islington Mill and Fat Out seem to be taking it an interesting new direction.”

The suitably sprawling venue of Islington Mill is also going to see some breaks with tradition; as its entrance space will be taken over and transformed by resident sound-artist Helmut Lemke and his Sounds of Walls installation. It’s all part of Far Out’s effort to transform it into a creative space it also calls ‘The Burrow’. So it’s not just music, but a multimedia mash-up of art and creativity, breaking open new ideas for ‘festival culture’. Awesome vegan food, retro gaming and group dancing are just some of the options before the music even begins!

It all kicks off on Wednesday 23rd March with a free show from Manchester’s very own Now Wave artists, Dutch Uncles and Bernard & Edith. This first-night feature is already sold-out, expected to be loud, proud and powerful; what music in this city is all about. Thursday is the turn of Bristol-based Cacophonous Sarcophagus complete with electric artists such as HUM and Kink Gong as well as a DJ set from Conor Thomas. And if creative work on the decks does it for you, then there’s even more to look forward to on Friday, with a SIX HOUR set from Optimo. Coming from Glasgow to bring genre-pushing music to Manchester, Jonnie Wilkes of Optimo reflected on why this city matters creatively:

“I’ve known the music that was emanating from the city (Manchester) since I was quite young and always held it in my imagination as a place where more off-centre things were happening, probably because of the bands I liked from the city. It’s always been on my radar as a place that was sympathetic to creatives and supported things that were a bit more adventurous. So yes, I’m happy to say I’m getting to know and love the city more and more as time goes on and we’re pleased as punch to connect again through A-Bound.”

And if you think the first series of acts are intense, the weekend will be taking it to another level altogether. Saturday holds High Hoops, a promoter straddling both London and Manchester and serving up some seriously good House, Disco and Techno tunes. On the 26th this is set to include artists such as Antal, Ruf Dug and the ever-popular Joy Social.

Sunday has an air of mystery about it in comparison – at this stage a day of interest more than a ‘day of rest’ with Oxford-based Supernormal bringing a ‘Love Each Other or Die’ showcase of artists. This is a point which sets A-Bound apart from other music festivals; there is the chance to be surprised by some seriously experimental creativity! Names mentioned include Consumer Electronics, Gum Takes Tooth and Circuit Breaker, whilst a number of workshops and screenings will be springing up throughout the day. A-Bound is after all offering the possibility for you to unlock and enjoy something different. Why not give it a try? 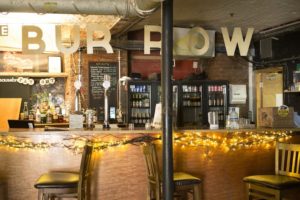 For more information on the festival and for tickets (varying between £5-8 advance for each day or £20 for the whole thing), you can visit the Fat Out website.