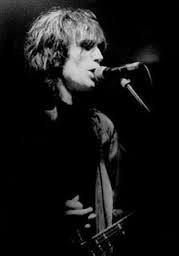 The One & Only:
Peter Perrett, Homme Fatale
By Nina Antonia
With new introduction by John Cooper Clarke

As the legendary Peter Perrett emerges after years as a recluse to perform again, this new, expanded edition of Nina Antonia’s cult 1996 biography of The Only Ones frontman, is welcome and timely. A new chapter, recent interviews, and fresh material written by Perrett himself, bring the story up to date.

‘The One & Only’ is a roller-coaster ride through one of rock’s wildest, most unpredictable careers. Granted full access to the reclusive Perrett and everyone who matters in his story, Antonia unflinchingly traces his path from privileged childhood to drug dealer; from musical obscurity to decadent rock icon submerged in narcotic slumbers in an antique-filled mansion… before the dream spectacularly fell apart. The story of The Only Ones became an industry by-word for how not to succeed in the record business; yet the music, along with the allure of Perrett’s mysterious persona, has endured, as has his marriage of 40 years to the lion-hearted Zena. And Antonia narrates this bizarre love story with empathy and warmth: Far from faithful, the youthful Peter expected Zena to accept his other lovers, bathe him daily, butter his toast to the corners and prepare his coffee with the cream floating on the top. Yet the book ends with Perrett’s newly-penned love song to his ‘soul mate’, and a poignant lament that death will finally separate them. Despite the casualties that careen through these pages, including Johnny Thunders and Sid Vicious – Perrett played with both – this is ultimately a story of redemption and rebirth. Antonia’s 2015 interviews find the Perretts drug free, with Peter’s muse reawakened and their two sons following in their father’s musical footsteps.

About the author – Nina Antonia‘s accounts of the more perilous aspects of the rock n’ roll life have ensured an avid readership. Other titles by Ms Antonia include Johnny Thunders – In Cold Blood, and The New York Dolls – Too Much Too Soon. Peter Doherty’s literary agent, she transcribed and edited his recent journals for the book From Albion to Shangri-La (Thin Man Press, London).

‘I loved the Only Ones… I went everywhere to see them.’  Johnny Marr (The Smiths/Solo Artist)

‘Peter Perrett: An Arcadian genius on the Albion diet.’ Peter Doherty (The Libertines/Babyshambles)