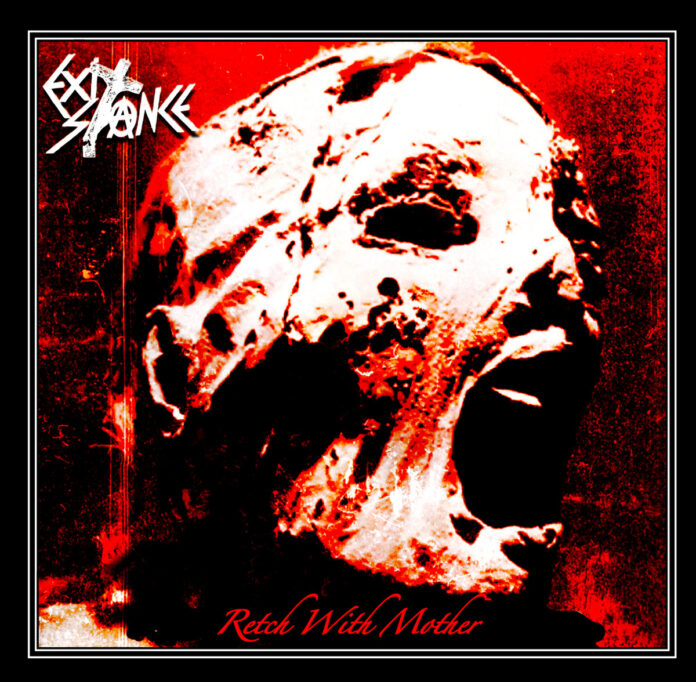 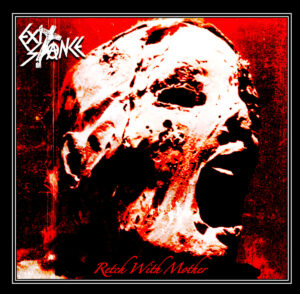 The latest in a series of 10 inch mini albums from Grow Your Own records showcases new material from reformed 80s anarcho-punks Exit-Stance. It’s thrashy anarcho-punk and Nathan Brown reckons there is a horror theme, but it’s the horror of reality.

Retch With Mother! I love a play on words. I’m not old enough to have seen Watch with Mother but it’s a cultural reference most will get straight away. This release has been eagerly anticipated by many and with it comes the old quandry for all recently reformed bands. Will we get a rehash of the old which will tickle the nostalgia neurons for a few? Will they bring a new take on the familiar with the passage of time. Or will this be unrecognisable, in which case, why bother with the name? With Exit-stance you get something that is most definitely recognisable as the old band but with a new twist.

Church bells toll, the drums beat like a quickening heart, as if pursued by some unseen entity. Then the bass and guitars kick in. With a tune very akin to Exit Stance’s older output on Mortarhate Records, this song uses minor chord progressions to put you slightly ill at ease. This is atmospheric in the way that Killing Joke are, creating a sense of tension. Not everybody is happy nowadays. It also sounds somewhat subterranean (very apt given that the song references the children buried in secret at an orphanage in Galway). The lyrics focus on the ills of the Catholic church, also equating what happened in the Magdalen laundries with persecution of women during the witch trials.

November, a tale of the Western Front, gallops through the first verse like the cavalry galloped towards machine guns, and by the second verse has slowed to the tempo of a tank chuntering through the mud. It follows on from their Say Nothing 12″ EP in 2017 which heavily focused on WW1. This is where singer Sean gets into full pitbull flow, spitting out the words relentlessly.

No One Hears The Screams sees the band return to familiar territory as they were always clearly marked out as supporting Animal Liberation. However, this does not sound like the Exit Stance of old. Since-departed guitarist Emily Flea sings this one over a clean melodic guitar and the rest of the band taking a back seat.  The result is something that is very much an 80s anarcho-punk sound. It transpires that this was originally an Emily Flea solo acoustic number. While Exit Stance are perfectly capable of holding your attention for a whole album this variety is welcome. The contrast between this song and the angrier material works well. And there is something about ending the side of a record on a slow one that seems to work.

Flipping over to side two, Control is more classic Exit-Stance led by the bass with stompy drums and driving vocals. There are 2 string melodies and chainsaw guitar, dropping into heavier damped guitar tone. At times the chuggy metallic guitar emulates the sound I’ll always associate with Mik from Coitus and early Restarts. The song is about the highly offended white male phenomenon I can most accurately refer to as gammon, “Hunting in packs and thinking as one”. Full of bile and hatred, gammons are diametrically opposed to all that this band stand for.

Retch With Mother uses a sample to introduce a song about eating meat. A fast one with singer Sean angrily spewing out the words, we also get more of Emily’s vocal on the line “A bloody mess and you call it dinnner. A butchered life I call this murder”. This is one of those tunes that grows on you the more you hear it. To the extent that after 5 listens I couldn’t stop humming the bloody thing.  Okay, so this is not a new subject, but it doesn’t make it any less valid.  And with our current global pandemic likely started by the way animals are abused and sold, it couldn’t be more topical.

Finishing on another Emily lead vocal, Ethel MacDonald is a fast and thrashy affair. It celebrates the eponymous heroine who joined the Republicans in Spain in 1936, fighting “For something better, from Motherwell to Barcelona”. An anarchist who broadcast on a Barcelona radio station in 1937, this wonderful woman was dubbed “The Scots Scarlet Pimpernel” in newspaper reports. On account of her escape from imprisonment by fascists. Like all Grow Your Own releases the physical artefact has had much love spent on it. Each of the 6 songs gets its one page in the 8 page booklet.

Whereas 1980s Exit-Stance had a somewhat dirgey underbelly, they are now more thrashy. It’s mainly the guitar tone that makes them noisier and thrashier than earlier output but there are cymbals crashing everywhere. The music and art is very horror influenced IMHO – but we’re not talking camp vampires. A mummified head adorns the front cover but the gatefold inside is the winning art. It combines zombie imagery and religious fervour (religious nuts may as well be zombies,eh?). Christ on the cross combined with animal abusing fast food chains. And carrion crows under an apocalyptic sky. 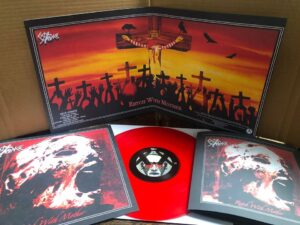 Whilst George A Romero held up a mirror and used zombies as a metaphor for consumerism, Exit-Stance dispense with metaphor and describe the actual horrors that have taken place. And are taking place. While the Magdalen laundries and WW1 may now be history, wars are still fought and religions still abuse vulnerable people. Animals are still routinely tortured and consumed. Sexism, racism and misogyny are still all too easy to find. I like to think that Ethel MacDonald represents the last ray of hope….that people will kick back against an unjust world and join the struggle.

Listening to this record caused a tug on the old heart strings for me as Exit Stance were the last band I saw live before Covid 19 shut down venues across the country. Possibly the last UK punk gig to date on 14th March, the Grow Your Own all dayer at Overdrive Studios was a great last gig to dwell on. Like you all I can’t wait until we can #letthemusicplay

Get the mini album or download from Grow Your Own

All words by Nathan Brown. You can read more from Nathan on Louder Than War here.