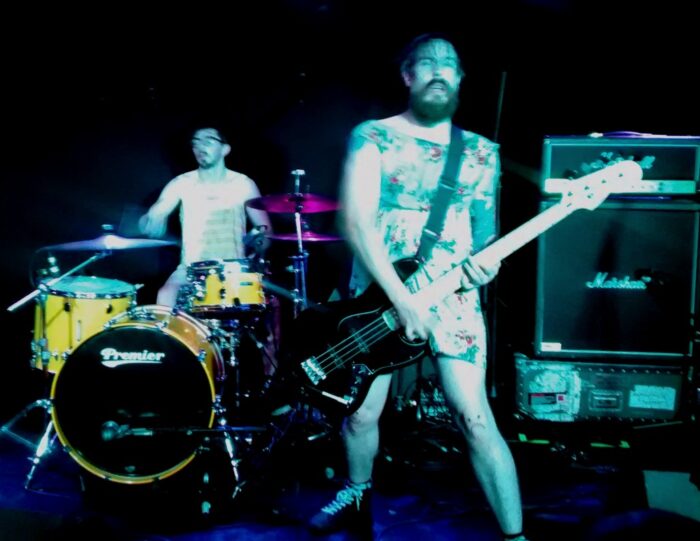 A final goodbye for one of the finest band you really should have paid more attention to. Louder Than War’s Christopher Lloyd reviews.

When an ex-member of Midasuno met up with an ex-member of Martini Henry Rifles and joined forces with drummer Adam Thomas, Exit International was born. They released their debut album ‘Black Junk’, toured hard, released their second album ‘Our Science Is Golden’ and toured it before taking a breather to record album number three, then shockingly announcing that they were soon to be splitting. Front man Scott Lee Andrews is leaving for Australia with his wife. This split is real.

It’s Halloween weekend 2015 and Ginger Wildheart is hosting his annual Halloween Hootenanny. The Friday line up is a strong one: Tropical Contact, Heck (nee Baby Godzilla), Eureka Machines, Wolfsbane & Ginger’s ‘Hey Hello’ project are all on the line-up, Sadly and joyously, the opening set is the final ever performance from Exit International.

The band had the potential to be big. They started at the bottom and they ended at the bottom, yet throughout their short lifespan they proved to be one of the tightest and downright full-on live bands you could wish to see. Their hearts were always proudly on display of their sleeves of whatever frocks they chose to don that day. The love for each other and their small but very loyal fan base set them firmly apart from other bands on the scene, to the point where the bulk of their fan base were actually invited to be on their second album.

Wolverhampton Slade Rooms is fairly packed. It seems as though every fan of the band are in this room, united. When the band hit the stage the bar empties. People who aren’t necessarily fans of Exit International flood in as if to pay respects. There’s a strange and extraordinarily bittersweet vibe in the room. They kick off with ‘Glory Horn’ and quickly rip into ‘Sex W/Strangers’. Scott is screaming his heart out, Fudge Wilson, who is sporting a big beard, big skirt and a bigger heart, plays his bass like a man possessed. Adam hits the drums harder now than I’ve ever seen him hit. They tear into ‘Fuck Yeah Depression’, indisputably their best track, with absolute fury. It’s an alarmingly emotional barrage of noise, and thirty minutes later as the band’s final track ‘Sherman Fang’ hits it’s latter half with its machine gun drums and gut wrenching bass, a wave of joy and realization takes hold. The place goes insane. This is the end. The band hugs one another and there are genuine tears of sadness in the room. Exit International are no more.

Though Exit International never got to be a major draw, they achieved something more important. They were totally real and made brilliant music. If the world wasn’t quite ready to hear it, then tough shit, world. I’d been reviewing bands since 1992, and by 2010 I’d had enough of the music scene and was totally disillusioned. I was sent out to review a gig I had no interest in seeing, and  caught Exit International who were there as a support band. They blew me away. I chatted to them at the merch table, finding them to be very funny and warm. I ended up tagging along with them a bit and writing about tours. Through doing this I met other bands that were equally as awesome. Exit International totally re-ignited my love of small independent music after years of being in the wrong place, helped me make new friends, find out about new bands and feel alive again. I know for a fact that it’s not just I that they had this effect on.

To make create these kind of bonds must be a legacy Exit International can be truly proud of, for it’s the most important thing a band can do. They are a much-needed reminder about what music and live shows are really about, and they will be very sadly missed.

Exit International are no more. You can, however, listen to their fantastic album ‘Our Science Is Golden’ here.

More writing by Christopher Lloyd can be found at his author’s archive.