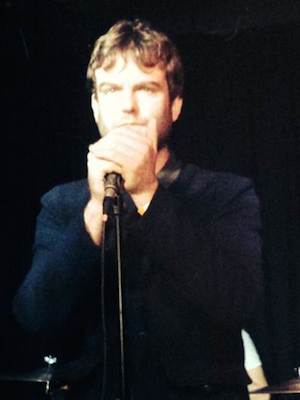 Exit Calm are a band with a sound as big as their ambitions, but does that translate in to a live environment? Louder Than War’s Jason Wynne certainly thinks so.

Imagine once being the self-proclaimed  “biggest and best live band in the world” and then, as your career comes to an end, you feel the need to strike up a deal with the giant that is Apple and force feed your music on 500 million people simply by flicking a switch? The last act of a desperate man. Even the biggest still need to feel relevant and wanted in this cut throat business. The future eh? The future, most definitely, isn’t what it used to be.

Then we have Exit Calm. Not a band that like to promote themselves extensively which is a shame really as they should be up in the higher echelons of greatness. It can be frustrating at times championing a band who many have still never heard of. “Exit who? Exit Farm?”. Now imagine if Exit Calm could just flick a switch and introduce themselves to a new audience too? People opening their eyes and ears to an ethereal sound of epic, soaring landscapes. A musical apocalypse with the potential to be HUGE. They ARE relevant and they could easily be the best live band in the world, if they aren’t already. They know it and we, the loyal fans, know it too.

Tonight they’re back in Manchester on a string of UK dates playing old and, rather more excitingly, new songs and they don’t disappoint with a performance of energy, enthusiasm and raw emotion.

Walking out to Talk Talk’s “Life’s What You Make It” there’s an air of anticipation, as there always is, when these four forward thinking lads take to the stage. Not only looking the part, they sound it too.

“Holy War” kicks off proceedings. Taken from the critically acclaimed second album “The Future Isn’t What It Used To Be”. It might be a small, intimate stage but the sound is massive. It’s epic. The wall of sound generated from Rob Marshall’s wailing guitar goes hand in hand with the fluid rhythm section of Simon Lindley’s heavy bass lines and Scott Pemberton’s precision drumming. Nicky Smith beats his chest and tells us “We are holier than any religion”. The masses looking up to the preacher as the song fades out to a crescendo of white noise. One song in and the place is shaking, rattling, rocking and rolling. “Turn it down a bit” someone shouts from the congregation. “What? You want us to turn it up a bit?” quips Smith.

Next up is Promise. It’s a slow burner of a song, starting off as a seemingly dark melody – a shoegazer’s dream – with the voice getting inside your head before the guitars sonically explode with brightness and light. Smith’s vocal asking us to choose between love and fear proclaiming “seek and you will find”. 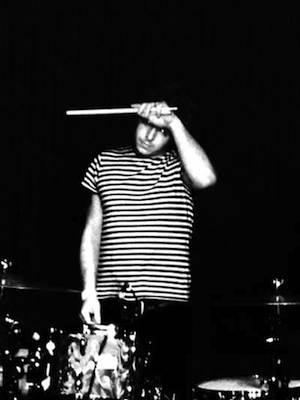 Crowd favourite The Rapture follows. Both Sky Sports and ITV Sport have seen fit to use this anthem and it’s uplifting, catchy riffs should have broke the band into the mainstream. I’ve no doubt had this been the comeback single of Oasis, Doves, Verve or whoever then it would have been a top 10 single – no doubt about it. Live it’s even better than on record. “The rapture will come…and it won’t be long.” That’s the beauty of this band. Live is where they come into their own. They own the stage, they own the crowd.

This stage is far too small to accomodate the band and you have to be here to appreciate the magnitude of the noise and widescreen layers of searing landscapes although they could probably make Knebworth Park an intimate experience if that’s what they wanted to do. It’s that intimate that Nicky makes time to rearrange the lights as they’re clearing shining too brightly into the eyes.

The first of the new songs “The Veil” follows and what a cracker it is – this should be the new single. It seems a lot of the new stuff is between the 4 – 5 minute mark in length. Surely a good thing for radio play although the longer songs with exquisite solos showcasing the talent of all members of the band have to stay too. The hardcore fanatics already seem to know the words to this even though the band only threw out clips of three new songs as a little taster to whet the appetite ahead of this run of dates.

“The race is over let’s call it a day….It’s all just a veil” except Exit Calm’s race is far from over. They’re still at the early stages of their race and when Smith sings “All I see are angels right beside of me” the chemistry between band and crowd intensifies. It goes down a storm. The reaction is immense and both band and crowd are now feeding off each other more than I think I’ve ever seen at an Exit Calm gig. The band look genuinely thrilled but still remain somewhat humbled by the experience.

The band take time to compose themselves as the audience bellow out requests with Nicky exclaiming “we don’t do requests but you’ve guessed this one right”  before Smith launches into “an old song”. The opening chords to “Higher Learning” are enough to lift the crowd even more. Marshall is the master of the guitar complimented by Lindley’s exquisite bass lines and Pemberton’s charismatic drumming. Throw the yearning vocal of the infectious frontman “And if you feel your ears are burning, it’s probably you I talk of” into the mix and you’ve got a spine tingling, hairs standing up on the back of your neck moment.

We are then treated to another brilliant new song “Footprints”. As both guitars exhale and inhale in tandem creating a monster groove. The third album promises to be the best yet.

“Do you feel a change coming? Do you know it’s your time?”. This is Exit Calm’s time and a change is on it’s way. 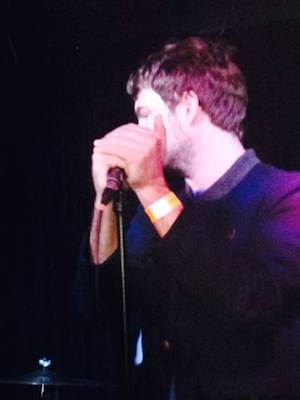 Just when you think the fourpiece have gone all positive on us they revert back to an often pensive and reflective mood with the outstanding “Reference”. A song of love, lust, loss and being found. “Even though you’re standing next to me you seem so far away, I am lost in your infinity and I can’t escape”. Smith’s eyes shut tightly, feeling the bass, the guitar, the drums driving through his body from his feet slowly building up right to his head before an explosion of noise he releases all emotions. This is raw, this is real and it’s incredible to witness. Everything is put into every song. The band know no other way. Smith is almost laughing at the ridiculousness of how good they are tonight.

There are calls from further back in the crowd for wordsmith Smith to turn the lights back on himself as people can’t see him. “You can’t see me? I can’t fucking see any of you” he bites back with typical deadpan delivery before they launch into the Ian Brown-like “Fiction”. Some say it’s one of the few songs that veers away from the unique sound that is Exit Calm’s. Either way, it’s a crowd favourite and when we’re asked “how does it feel on the other side?” there are enough smiles and rapturous applause to confirm it’s feeling like something worth celebrating.

“Come Back Again” is the third new offering of the night from the rumoured third album that they’re currently working on and again it’s a fresh, more rocky, sound with pounding drums, thunderous bass, edgy guitar and rasping vocals. The eight legged groove machine have clearly been working on some wondrous new stuff and the album can’t come out quick enough and hopefully they’ll be playing some of the major festivals next year. No doubt they’ll relentlessly tour and this HAS to be their time.

Now they have such an extensive back catalogue the boys can afford to omit classics such as “When They Rise”, “Albion” and “Don’t Look Down” although it’s great to hear “Hearts And Minds”. The intro building up into a crescendo of noise, the beat pulsates, the noise reverbs right through you as Smith beats his chest…”It’s a fight…between your heart and mind”…Marshall unleashes the axe, Lindley cranks up the bass and Pemberton beats the drums into submission leaving the crowd breathless.

Then just as if we couldn’t get any higher the Yorkshire boys meander into “Higher Bound”. They came to blow our minds. They conquered. They left the whole room spinning round. They took our weight off the ground. Job done between band and crowd. There are many that have travelled afar, some less so, and the whole room has lit up like a beacon of joy.

A fantastic celebration of a band truly on the rise. With every challenge that is thrown at them they fight back with the Northern grit they possess and the steely “We’re On Our Own” brings the show to a climax. Musicians of unbelievable talent, grounded, in touch with their fans telling us “the past and the future doesn’t mean a thing. This moment’s the only place to be.” It’s a moment none of us present want to get out of. Why would we? We all want this gig to last forever…band ‘n’ all. This is it.

“Biggest and best live band in the world”? This lot are without doubt the best. The biggest? Now where’s the phone number for Apple CEO Tim Cook? I’ve got a proposition for him.


~
You can find exit calm on their official website, their label site, or Facebook.
All words by Jason Wynne. More writing by Jason can be found at his author’s archive.