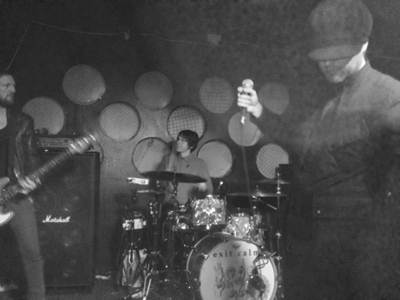 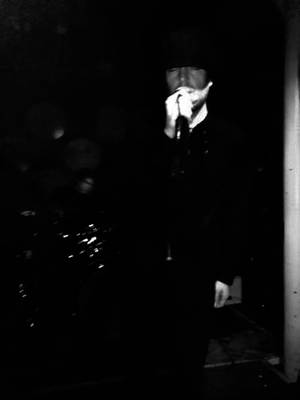 Touring in conjunction with their new single ‘Promise’, Exit Calm arrive in Manchester and the ‘Sold Out’ signs are up. Encouragingly, the mini UK Tour is a complete sell out and the boys seem to be, finally, getting the recognition they so richly deserve. With tonight comes the usual air of anticipation that is associated with any of their live performances. The intimate setting versus the big, booming landscape of noise. This doesn’t always work with bands but with Exit Calm it invariably does. Tonight will be no different.

The crowd enter the stage to rapturous applause and, fittingly, start with new crowd favourite ‘Rapture’. The opening would be fit to grace the stage for any great band except there’s nobody better out there right now. From the opening chords of Rob Marshall’s guitar, Simon’s rumbling bass riff kicks in, followed by the military precision of Scott’s drumming.  Action man, eagle eyed Nicky Smith glares intensely into the crowd ”I could play you in a film without a script and win an Oscar” he sings. You believe him when he says this.

Without time to catch breath the band elevate us to higher ground with ‘Fiction’. A stomper of a song with further guitar playing of supreme brilliance. The catchy riffs building up with the intimidating, angry, prowling Smith asking us “How’s it feel on the other side?”. As I look across the crowd it’s pretty clear that it feels like the celebration of a band ready to rise off this cusp of greatness that they’ve been on for too long now.

Tonight the band seem more confident and relaxed in themselves while still delivering the intensity that an Exit Calm audience expects. ‘Albion’ demonstrates perfectly four young men believing they possess something special that very few bands have these days – a connection with their audience. 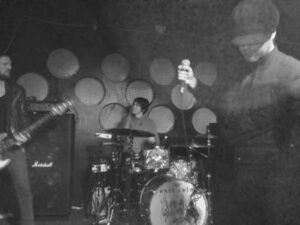 ‘Promise’ offers us some of Nicky Smith’s finest lyrics. “I am the voice between your ears and in your mind” is his opening gambit. Pemberton’s drums crash in and, again, the band in perfect symmetry create a crescendo of noise as the virtuoso Marshall bursts into a brilliant solo, mesmerising the audience. Moving lyrics, sung from the heart. “I’ll be the warning light for love, I will be blinding.”

We even get to see a new side to lead singer Nicky Smith with a smile and some banter with the audience before the delightful ‘Higher Bound’ is introduced. This song, a masterpiece on record, is simply breathtaking live. It’s beauty lies not only in the vocal performance but in the lyrics too. “We were ships passing by in the night, Now we’re harboured and it’s never been more right.” It’s anthemic, it’s uplifting and it’s inspiring. A love song that Noel Gallagher wishes he could have wrote. I’ve no doubt if Oasis had produced this song during the What’s The Story period it would have been ‘the greatest love song ever written’.

When the opening chords of ‘Higher Learning’ are played out there’s a roar that travels right from the front to the back of the audience and back to the front again. Rippling waves of expectancy of what’s to come. Smith, eyes wide shut, giving it his all just like the rest of the band.”And if you feel your ears are burning, It’s probably you I talk of.” So much emotion, sung straight from the heart, revealing his soul, chest thumping, foot stomping and connecting with a spellbound crowd that know fully well it won’t be long now before they make the next step up to deliver these massive tunes to a bigger audience. If any band deserves it then it has to be these.

‘Holy War’ is loud, very loud and has Smith telling us to “open your eyes, it’s all inside” as Rob Marshall continues to astonish with the way he makes guitar playing look so easy. The bassline too cannot be underestimated on this track. It’s on songs like this though that you realise this band is a four legged table. It needs all four members to carry each other, each one essential to the other. They’re all vital cogs in the continued success of a massively underrated band and when Smith sings “I can see the open road there’s nothing stopping us” I hope that the band can use those lyrics, in different context to on this song, and continue with their positive, dynamic thinking.

After the epic intensity of Holy War we are treated to the beautiful masterpiece that is ‘Open Your Sky’. Lyrically astute as ever, “Open your sky and shine my way” goes the chorus. Throw in the ingredients of Simon Lindley’s masterful bass playing, Rob’s wizardy on guitar, Scott Pemberton’s perfect drumming and Nicky’s rasping, soothing vocal and you have another song of sublime beauty. As the song draws to a conclusion the appreciative audience howl in delight and ask for more. They clearly don’t want this night to end so it’s a shame that there’s a curfew on tonight’s show that means the venue won’t budge on a very early finish giving us just one more song to lose ourselves in.

‘Hearts And Minds’ is by no means a bad song to end proceedings on. Psychedelia meets shoe-gaze, it’s dark, brooding intro gets the crowd nodding their appreciation and as the song progresses we feel the anger, the energy, the positivity, the negativity, the dismay, the celebration all rolled into one. All emotions clashing just like the guitar, the bass, the drums and the vocal all fighting each other but coming up with a sound that could and should result in the song being rated as an all time classic in years to come. “It’s a fight, between your heart and mind” sings Smith. You know the band believe in what they’re doing and so do their hardcore following so when the enigmatic frontman sings “When the love is lost, your number’s up” you just hope, pray, that they carry on loving what they’re doing and that the rumoured third album does come into fruition. With that, the gig ends and these humble Yorkshire lads give out their own appreciation to the crowd. It’s a two-way thing you see, appreciation between crowd and band. However, it’s been very rare with a lot of bands I’ve seen recently so this band continue to buck the trend for the better. It’s a privilege to see them live and they feel privileged to be playing live – the perfect combination.

My only criticisms from the night come in the form of an unnecessary curfew on the band playing on, a curfew on the bar and the band not playing ‘Reference’ or ‘When They Rise’. Criticisms like that I can live with when you get to see a band giving it their all, like it’s their last ever gig every time they set foot on the stage. With that sort of attitude I can only recommend you go and see this band at least once in your life. The thing is, you’ll always go back for more…for sure.

You can find exit calm at: