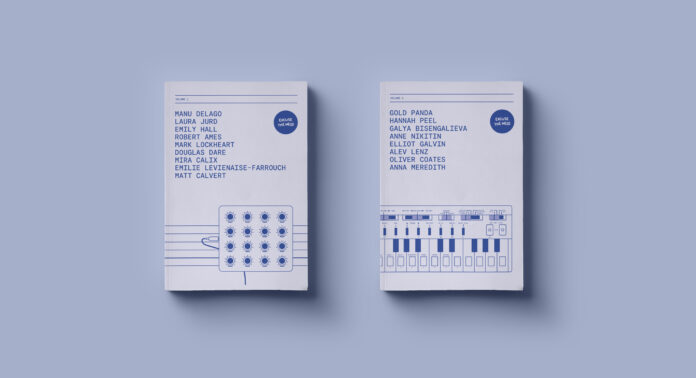 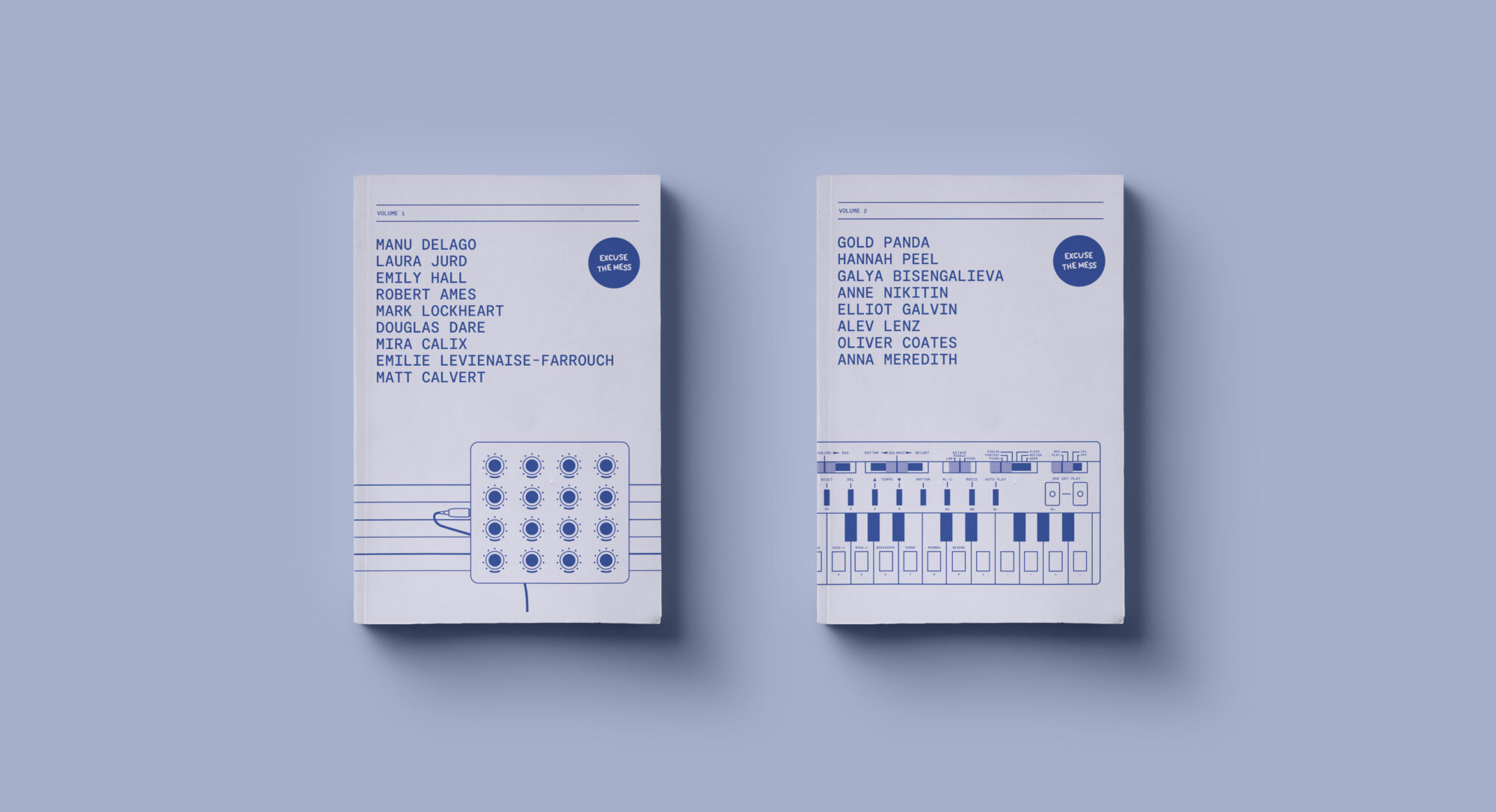 excuse the mess is a podcast hosted by Ben Corrigan and featuring some of the country’s leading composers that has been developed into a beautiful collector’s item by Hidden Notes Records. Two books, two albums. Together, they create a document of wonderful, authentic spontaneity captured forever. Gordon Rutherford reviews for Louder Than War.

In 2017, the composer Ben Corrigan had an idea to launch a podcast. Who didn’t? However, Ben’s podcast would have a twist. It would have been easy to invite in some of the world’s most innovative composers and musicians for a cosy fireside chat. Had he chosen that route, I’m pretty certain that I wouldn’t be writing this piece. There had to be more, there had to be something to elevate his concept, excuse the mess, above the plethora of other podcasts and make it unique. That special ingredient came in the form of a challenge. As well as the interview, each guest on excuse the mess would be required to collaborate with Corrigan to compose a brand-new piece of music on the fly, in the room, in real time. There were only three rules: no preplanning; the track must be completed on the same day and only one instrument can be used as a sound source (although that can be subsequently augmented electronically).

excuse the mess has now been on air for almost five years and, in that time, Corrigan has interviewed – and created music with – the likes of Hannah Peel, Gold Panda, Anna Meredith, Manu Delago, Douglas Dare and Mark Lockheart. In total, there are seventeen episodes, each of them a little trinket of remarkable music memorabilia. Special treasures. It would be such a shame for them to feature on one episode of a podcast then be forgotten about for eternity.

Hidden Notes Records were well aware of the magic of excuse the mess and they felt that this concept deserved to be packaged up in a special way. And boy, have they made it special. The package consists of two books – volumes one and two (unsurprisingly) – that are beautifully compiled and designed. Accompanying these are two compilation albums containing all of the compositions.

Let’s take the books first. The most wonderful thing about these lovingly created, beautifully designed tomes are the photographs. Not once is an artist posing or staging the environment. They are raw and natural and authentic. They are, in a way, homespun, like the photographs we might take messing around with friends or family. The difference is that their playground is the studio and their toys are musical instruments (and, on occasion, their musical instruments are toys). We see snapshots of Mira Calix at Streatham Ice Rink (more on that later) and Emily Hall walking with Corrigan on a forest path in winter.

The books also provide rich insight into both the recording and composition process and the experience of the artist. With a chapter dedicated to each track, we glean reams of interesting detail. Manu Delago talks about how, in creating his contribution, he “tried to do stuff that I wouldn’t do”. This turns out to be a common theme amongst many of the participating artists; how this unique and challenging process had effectively forced them out of their comfort zones into a place that required them to function quite differently. Similarly, Douglas Dare states that “it’s nothing like anything I’ve done before”. This pressure, this enforced change to the norms, makes for a fascinating read.

The quality of the music contained on the accompanying albums is equally good. Throughout both albums, or volumes, we are treated to incredible diversity and the most phenomenal creativity. For each artist to have created their composition from scratch within the timeframe and the bounds of the instrumental constraints is staggering. Volume 1 is the more conventional of the two. It is also the only one to feature a track with vocal and perhaps it is because of my admiration (as evidenced by my review of his 2020 album, Milkteeth, for this publication) for the work of Douglas Dare, that it is my personal favourite of the two. Dare’s contribution, entitled Ministry 101, is outstanding, his voice characteristically intimate yet soaring. Equally brilliant is Inside And Out, the rippling, minimalist piano composition from Emile Levienaise-Farrouch. Both Dare and Levienaise-Farrouch have gone down a relatively conventional path by comparison to some others on this collection. Mira Calix went in the opposite direction, choosing Streatham Ice Rink not only as a photo opportunity, but as her instrument. Yes, you read that correctly. Calix and Corrigan collaborate to take field recordings of the ice rink, capturing people falling and performing hard stops, all against a backdrop of a rumbling PA. Returning to the studio, they combine this with electronics, crafting it into something weird, wacky and quite wonderful.

Whilst the music on Volume 2 might not grab one with the same impact, it ups the ante on the unconventionality scale. Here we have two-time Ivor Novello nominated classical composer, Anne Nikitin, rocking up with the little Casio VL Tone that Santa Claus left under her Christmas tree when she was five years old. Elliot Galvin, one of the rising stars of the UK’s burgeoning jazz scene, brings a toy piano. Literally. Composer extraordinaire Anna Meredith tops it all with her pesto jar. The thing is, none of these tracks sound gimmicky. Meredith’s contribution, Oopsloops, sounds like a proper fully fledged composition, not like someone tapping a jar of pasta sauce. Similarly, with Nikitin’s contribution. The Casio is detectable fleetingly, but if you heard this track in isolation without knowing anything about it, you wouldn’t think “there’s Anne messing around with that toy keyboard again”.

Therein lies the magic. From the photography in the books to the music on the albums, this package perfectly captures the finest composers the country has to offer effectively exposing themselves; stripping away any veneer and showing us who they really are. Yet, despite the rawness, or perhaps given that, the quality of the music is quite breathtaking.

All credit to Corrigan. The brainchild, the architect of excuse the mess. Let us not forget that he co-composed sixteen of the seventeen tracks on offer here. But, more importantly, he is the man who made it all happen. excuse the mess is a brilliant idea, but brilliant ideas don’t always work. They require diligence and focus, vision and planning to actually come to fruition and it is clear the Corrigan has applied all of these things in creating the platform for these outstanding documents.

Finally, if you want to be left with just one thing that truly captures the essence of excuse the mess, it comes in the form of a quote from Anne Nikitin. “I just fuck around with the knobs until I like what I hear.” How wonderful.

All words by Gordon Rutherford. More writing by Gordon can be found in his archive. Gordon is also on twitter as @R11Gordon and has a website here: