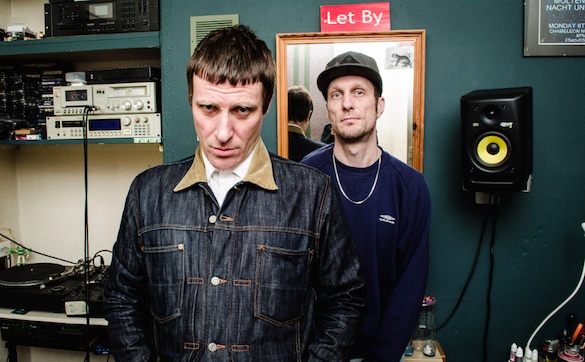 Louder Than War favourites Sleaford Mods release their new album, Divide and Exit, on Monday and we’ve managed to get hold of a track, Corgi, off it to share with you today. Scroll down for more about the album and to stream the track.

We ran our review of the new album a month ago now. It’s a great read (the review) and listen (the album) and if you haven’t  already checked it out (the review) you should do. Written by Carl Stanley, it opened saying:

“Running with the same frustration, confrontation, street smarts and cockiness as previously, Jason Williamson’s pick ‘n’ mix terrace rap and blind poetic fury is here as sharp and mean as anything on Austerity Dogs…”

“Divide and Exit is nasty as fuck, overloaded with attitude, clever, funny and it screams the truth. This, as well as being musically as far away as you can get from today’s corporate, nostalgic love-in. We need a group like Sleaford Mods more than ever and it’s now, as Williamson and Jason Fearn are beginning to break out of the internet underground and into the masses, that they’ve come up with not only their most complete record yet, but arguably one of the essential British albums of the year.”

And y’know what? It really is that good. Austerity Dogs may’ve put Sleaford Mods on the map, but Divide and Exit is quite possibly going to be the album that sends them stratospheric.

‘Divide and Exit’ contains 14 new tracks all written over the last 12 months. Staying true to their roots the album will be released on the elusive Nottingham-based low-profile Harbinger Sound label.

It’s due out on Monday 28th April.

To pre-order a copy of the LP at £14 ( UK ), £16 ( Europe ) and £19 ( world ) send the correct money to Paypal address harbingersound@lineone.net. The albums, they say “will be mailed out as soon as we get our percentage from the plant”. The label asks that you please ensure you give them the correct mailing address with your payment. The CD version will follow a couple of weeks later.

Sleaford Mods – Chubbed Up / singles collection can be found on their Bandcamp.