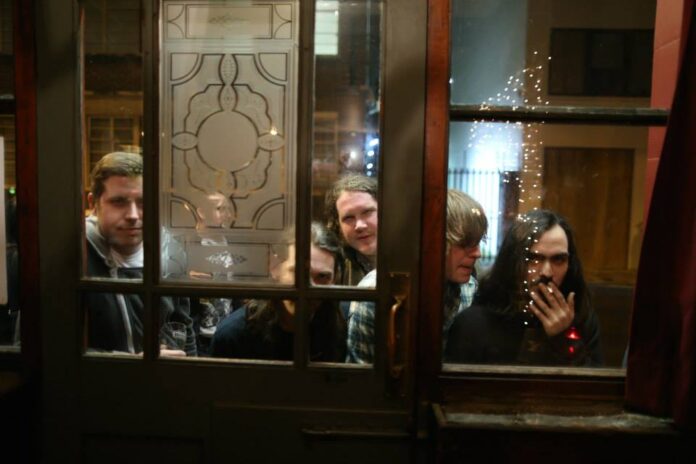 As one of the leading lights of the Trashmouth (Fat White Family) stable, Pit Ponies have just released a new track on soundcloud, from their forthcoming album, ‘Magnificent Second Occupation’. Stream it exclusively on Louder Than War via the above embed. Meanwhile, you can find more info on the band by reading on…

Pit Ponies are a 5 piece band with true working class roots from Upminster, East London. Formed in June 2013, the band have broken out of the confines of their practice rooms above a charity shop and have been building a solid reputation on the East London live circuit. Pit Ponies often share the running order with other bands signed to the Trashmouth Records label, playing regularly at The Fat White Family’s notorious ‘Slide In’ nights.

‘Welcome To The Unhappy Bit’, the Soundcloud track in question, features the usual excellent Pit Ponies combination of blues / rock guitars and rhythm section, with both the soulful, yet refreshingly honest lyrics and music providing a touch of drama. The track features the beautiful combination of laid back guitar by Albert John, the retro-styled keyboards of Chris OC and the finely intoned pathos of Euan Hartley’s vocals.

Describing Pit Ponies music as ‘Duende’ on their Facebook page, the band certainly don’t shy away from adding real emotion and passion to their music, and this track is no exception. The lyrics give the listener an impassioned character study of a man unable to grow up, a Peter Pan figure beautifully described in all his wretchedness. When Euan Hartley sings ‘This can’t be fun anymore’ it feels as if we’re looking through a lyrical window at the slightly pathetic man. This is what Pit Ponies do so well. The ballads they produce have a depth and quality many bands struggle to achieve.

As an appetiser, ‘Welcome To The Unhappy Bit’, is a tasty and accurate slice of the fine, melancholy music Pit Ponies produce. If you find this track to your taste, as I certainly do, then ‘Magnificent Second Occupation’ should be a top choice on your musical menu for the summer.

Magnificent Second Occupation can be pre-ordered at Bandcamp and will be available at Vinyl Deptford, Rough Trade and Norman Records.

Catch Pit Ponies at one of their forthcoming London gigs:

Further information on the band is available at their website: pitponies.org and on Facebook. To hear more music by them hit up Soundcloud.