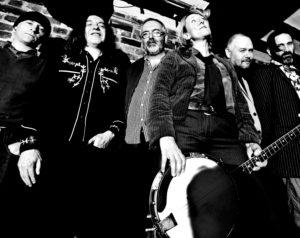 Merry Hell have released a new video and download single to tie in with their forthcoming spring tour – and it’s a Louder Than War exclusive.

Loving The Skin You’re In is taken from the folk-rock outfit’s critically-acclaimed second album Head Full Of Magic, Shoes Full Of Rain (Mrs Casey Records) which saw them land a series of high-profile festival dates in 2013.

Filmed in part at Flecky’s Tattoos in Warrington and Standish Unity Club, the video takes a light-hearted approach to emphasising the powerful message of the song’s lyrics: ‘be yourself, no matter what’.

Singer/songwriter Virginia Kettle, who oversaw the concept, explains: “So much has happened to the band since we made the last video. Our musical journey has taken us into a second album, live festival appearances down the length and across the breadth of the country; little gigs, big gigs, radio interviews, friendships forged with legends such as Dave Swarbrick, Gordon Giltrap and Mike Harding.

“Everywhere we’ve been, however grand or humble the venue, we have met such inspiring people, from amazingly talented musicians to those who make incredibly weird and wonderful things: real ale, jewellery, wines, breads, cheeses, ice cream! People of all ages, sizes, class and creed, all with their stories written on their faces, in their eyes, in their deep love of music.”

The video features friends the band have made during their current career and in their previous incarnation as The Tansads.

Virginia adds: “We all agreed that we wanted it to try and create a ‘festival of diversity’ so we invited some of our most colourful and unique friends to help us. From the moment they all turned up, we knew they were going to be just brilliant.

“It’s a mixed group of people with a shared intention: to let the commercial world know that the air-brushed puppet with the perfect mannequin smile doesn’t really do it for us anymore.”

Tickets are now on sale for Merry Hell’s ‘Loving The Skin You’re In’ Spring Tour. For details go www.merryhell.co.uk.

Neil, best known as a fiddle player, is a long term associate of several Merry Hell members and has lived and made music in London, Galway, Dublin, New York and Thailand. He formed Big Geraniums, who enjoyed success on the global festival circuit, playing alongside the likes of The Wailers, Van Morrison and Bob Dylan.

Nick, formerly of Sound Marshals and Jesus In India, replaces outgoing bassist Andrew Dawson, who has left with the band’s love and best wishes due to external factors.