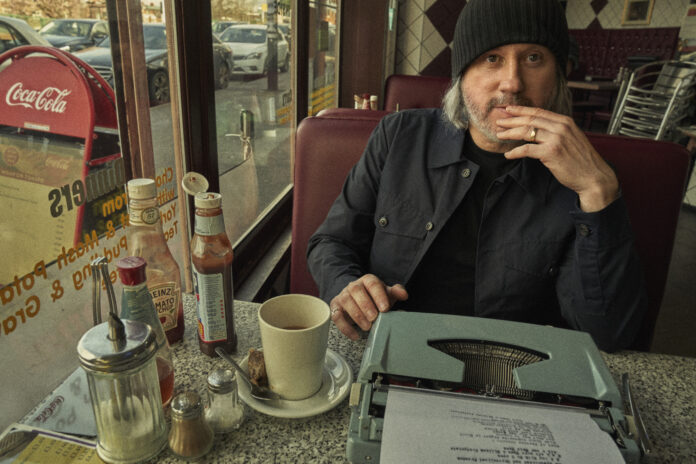 Badly Drawn Boy is back after a ten year hiatus with his stunning new album Banana Skin Shoes. When I say he’s back I mean it big time. It’s like he’s been storing up some gems to hit the world of music with. Damon Gough has always had that knack of writing catchy as fuck tunes and this release heralds the return of one of Manchester’s favourite sons. I have a cracking chat with the man himself and make a new friend in the meantime. Charming, no nonsense and down to earth. The round (non alcoholic) is on me when this lockdown is over! Here’s how it goes…

LTW: It’s been a while since your last album. What have you been up to?

Well, after the break up (with Clare) back in 2012 I was at a point where I was thinking about what to do next. I basically left that relationship and had to look at my problems such as the booze, which was an issue, then learn from my mistakes. Writing new songs was difficult and I had to change myself in order to move forward, which explains the name of the album Banana Skin Shoes, kind of falling down and getting back up again and proving you can go through the bad times and find your way out of it with hard work and determination. Meeting my wife Leanne and giving up the alcohol has all played a part in this process.

LTW: The new album is great listening. It sounds like you’ve put a lot of thought into this one. Tell us about it.

It’s like I say, it has songs about falling down, getting back up, past relationships coming to and end and new ones emerging. I had loads of songs written and managed to get it down to 14, each with a tale to tell. Like the song I Just Want To Wish You Happiness which is about the break up with Clare and how I just want us both to be happy with our lives as they go forward. A goodbye letter. Whereas there are other songs which are about my wife Leanne and our happy times ahead. I also don’t see this album is going back to form as I don’t believe the form was really lost. That first album always has that special feel for me being my debut and this just feels like a continuation of what I’ve always wanted to do. Just a longer time due to breaks up and such.

LTW: I really like the Motown tinged track Tony Wilson Said. A very nostalgic one for me!

Yeah. It’s a play on the song Jackie Wilson Said. A sort of ode to Tony who I met a few times back in the days of Twisted Nerve (label he started with Andy Votell) He was always nice to me then and would have us all laughing with his stories. His passion for music was so enthusiastic. I keep meaning to speak to Tony’s son Oliver when I get chance to get him to have a listen and hope he’s into it.

LTW: A lot of people on social media and fan sites are comparing you to Beck on the new single. What’s your take on that?

It’s strange in a way because I’ve actually met him and chatted and I’ve always respected the way he’s written his music over the years, mixing folk with other genres and creating his own sounds. I actually find it a kind of compliment as we are almost the same age and we have both stayed on different but similar paths. I do know the first track Banana Skin Shoes is the closest to a Beck comparison when people hear it.

LTW: How has the lockdown been for you and the family?

We’ve been keeping quite busy really, Leanne and Ruben my three year old are a big presence. I think the whole releasing of the album has been a big thing to keep us occupied (He’s actually signing 800 albums for going out as we speak). I’ve been doing my own Spotify playlists every two weeks, and I’ve done a few live acoustic sets on social media which is different from playing to an actual live audience due to the silence. It’s a strange situation at the moment and with the lockdown being eased at the moment it’s the uncertainty of whether this is the right time. Is it too soon? (I explain about my doubts travelling into Manchester for the day job, the roads getting busier, the eerie situation at The Infirmary and the social distancing issues).

LTW: I know you’re a big Man City fan. I saw you back in 2012 performing on the pitch at The Etihad on my birthday! How was that night and are you missing the game?

I actually appeared at Maine Rd before that for the End Of An Era game in 2004. I think they got beat 1-0 by Southampton, that was weird. I was honoured to be asked back to The Etihad. It’s quite overwhelming standing there on that pitch surrounded by the fans. That was the time of Tevez rumoured to be making an exit. As for watching the game nowadays I’m more of a fair weather fan, as I don’t go to many games like I used to. It’s sad really because you see these die hard fans who went through all those years of losing, yet stuck by them. It’s all changed now.

LTW: What are you listening to these days?

I seem to go back to the old influential stuff. I was flicking through some stuff the other day and for some reason I’m always pulling out Bob Dylan who is one of my main influences. You just can’t fault his catalogue. I use a quote from Dylan’s mum in the Song Note To Self if you listen. I can also go with Billy Bragg. The way he came out of nowhere and the way he conveyed a message from the start was always inspiring to me.

We could have chatted for hours about music and his new found optimism and happiness. A bloke totally on my wavelength, humble, honest and intelligent. I’m sure we’ll be meeting up after these strange times seem to become almost normal again. As for live music who knows how long before we will see BDB tour his new album?

For now let’s celebrate the music of Damon Gough when his latest Banana Skin Shoes lands on Friday 22nd May.