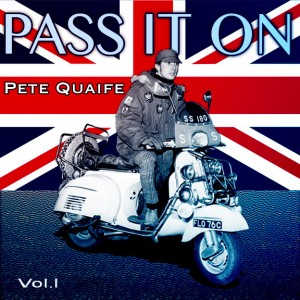 Louder Than War can exclusively reveal details about an amazing upcoming album release later this year. The Pete Quaife Foundation, one of Louder Than War’s favourite charities, have been busy putting together an amazing line up for the album, Legends: Shoulder To Shoulder, which will be officially announced at a special concert in Covent Garden this coming Saturday May 3 st .

Speaking to Louder Than War, Dave Quaife, brother of the legendary Kinks bassist, explained how he had been absolutely bowled over by interest from artists keen to contribute, and an amazing offer to do the album cover. “I could not believe it when John Kosh agreed to do the cover art for us as he is an absolute legend.” Having designed the legendary Abbey Road cover, Kosh went on to create many more historic pieces of album art for the likes of The Who, The Rolling Stones, T Rex, John Lennon, Marvin Gaye and Phil Spector among others.

This alone would be reason enough to take note of this fantastic release, but when you see the list of contributors, and the cause they are supporting, you will surely agree this is a very special album. “We are working with Dialysis Freedom which basically helps people, but in our case children specifically, identify where there is availability in units around the country so people are able to travel and still receive dialysis. We are also hoping to use some of the funds raised by the album to buy portable dialysis machines to give families even more freedom to travel with kids who need dialysis, or even just to prevent them being tied to hospital appointments.”

So what about the artists who are contributing tracks? Dave told us, “The list is amazing and we are so hugely grateful for what everyone has done so far. We’ve got a great mix of Pete’s contemporaries, big names who are fans and new bands. We’re always looking to help new acts and this is a great chance. The original plan was for one album but the response has been so good we’re now seriously considering extending it to five parts! ”

The Pete Quaife Foundation have certainly put together an amazing list of contributing artists. Spearheaded by famous Kinks fans Noel Gallagher and Paul Weller, the album also has a host of other big names. Just a few to conjure with include Mott The Hoople keyboardist Mick Bolton, soul legend Geno Washinton, ex-Small Faces Kenney Jones and Ian McLagan with Jeff Slate, Ocean Colour Scene and Johnette Napolitano of Concrete Blonde. Among other contributors are Billy Hinsche of The Beachboys, Wishbone Ash, The Honeycombs, Heavy Mod, Groundhogs, Chris Pope of the brilliant Chords, Roger McGuinn of The Byrds and Terry Reid has recorded a special live version of Waterloo Sunset with The Kast-off Kinks for the album.

Other acts include brilliant Welsh band Broken Vinyl Club, The Mynd Set, The Vals, the Get-Go and Manchester’s brilliant Electric Stars. This is shaping up to be something really special and Dave told us that expert help has come in from the USA to handle what promises to be huge interest stateside. ” We’re really lucky that Bobby Poe Jr has joined up with us as he’s one of the biggest names in the US music scene and can handle everything over there for us. His advice has been brilliant so far.”

There are still tickets available here for the concert at the Seven Dials Club, Covent Garden on Saturday from 1.30pm. Michael Julin, who collaborated with Pete Quaife in Denmark will be performing the songs they wrote together live for the first time in the UK. Mick Bolton will also be playing and at this stage there could still be more special guests turning up, as well as the relaunch of Pete’s book Veritas.

So, if you’re round London on May 31st, like good music and want to support a brilliant cause, then the Seven Dials Club is the place for you.