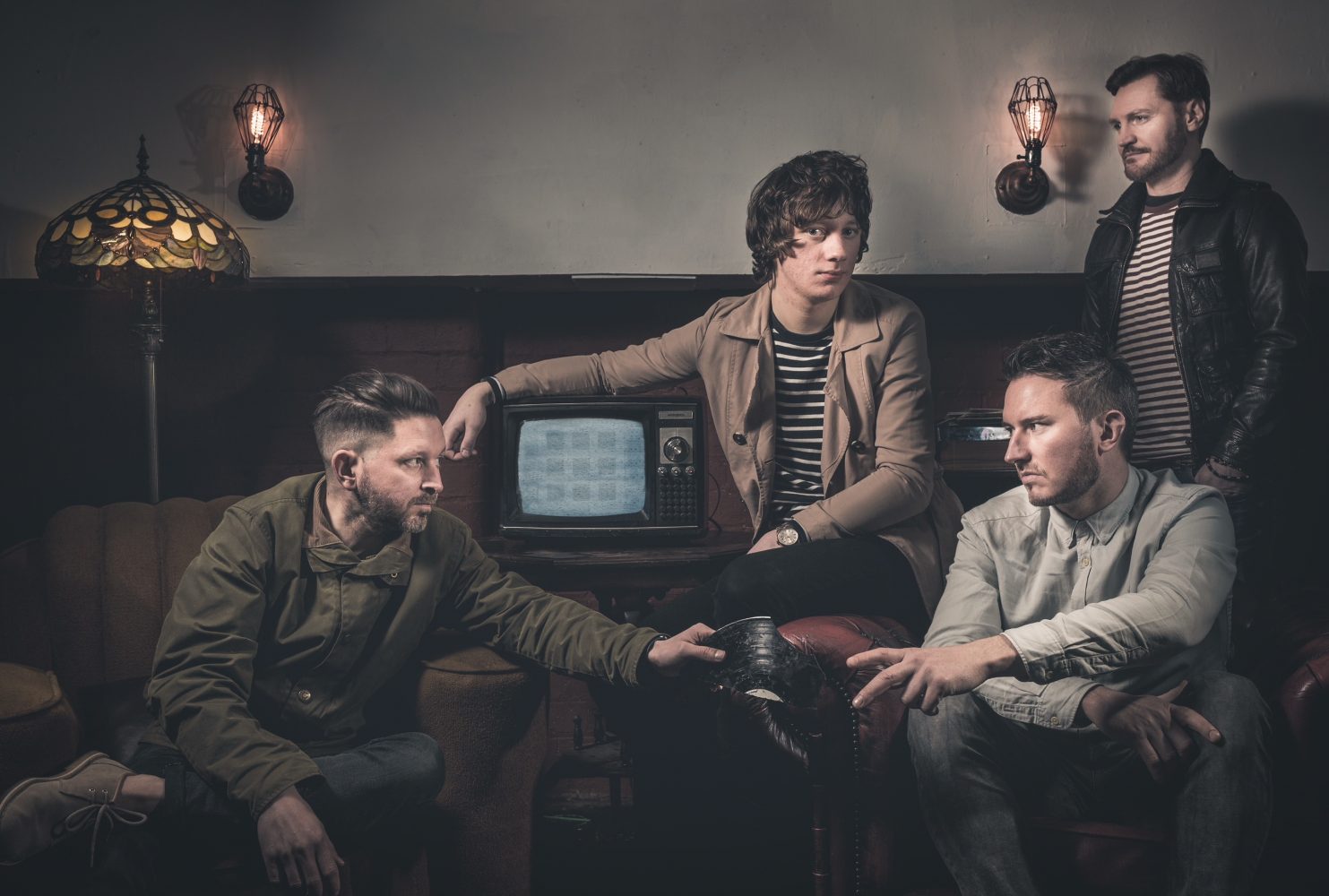 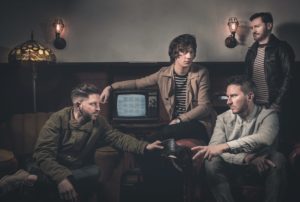 With an output that has been described as both epic and anthemic, Manchester based band narcissus were tipped for big things in the mid-noughties, having signed a publishing deal on the back of some genre-bending demos for a proposed album and following a series of amazing live events including a ‘D-percussion festival/band on the wall’ double header, the band we set for big time. Matt Mead interviews Ben from the band exclusively for Louder Than War about what they have been up to.

The quartets reputation was further enhanced with the release of debut single The Window through Manchester indie label Northern Ambition, the label was also responsible for Stephen Fretwell’s early output.  The collapse of narcissus’ publishing deal during the recording of their debut album led to a parting of ways, the finished album was shelved and the band members re-emerged in other bands such as The Synthetics and Signals.

Fast forward ten years and fate has lent a hand in reuniting narcissus. Two band members partners found themselves sharing an office and as a result of this, the album has been dusted off and played for the first time in a long time. Much to the musicians’ delight, it has aged remarkably, seeming strangely prescient for our times. With this in mind, a decade after it was recorded, debut album A Sense of Place is finally slated for release later this year.

narcissus have also recently been announced to be playing a special gig at the Charlatans Northwich take over on Saturday 19th May. Tickets are available here. 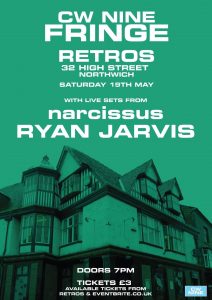 Can you please tell me about your backgrounds and where you all grew up?

We’re all Manchester lads from working-class backgrounds -I grew up on a council estate in North Manchester. I’m not sure there was anything particularly remarkable about our different upbringings dotted across Manchester but I dare say they are some key life events that shaped us in our formative years and propelled us down this path. Maybe Daddy didn’t hug us enough?

What were your first memories?

As my family will testify I have terrible recall but I can vaguely remember a few things like first getting a puppy & being afraid someone would take him, watching ET on an old VCR we had and bizarrely being petrified of a painting of Jesus in a friend’s house because his mum would say that he was watching us – cheap babysitter I suppose

What was the first music you can remember listening to?

Adam & The Ants – Stand & Deliver. I had a poster of him in all his finery.

What was the first serious music you can remember listening to?

Like most people it would’ve been the music my parents were listening to – Mum with lots of Motown, Stevie Wonder, Bowie and Michael Jackson – Off The Wall and Thriller were on heavy rotation and then my old man was more Peter Gabriel, Prince and Prog!

As predictable as it is, the first band I loved as my own was Oasis. I was an impressionable teenager when Definitely Maybe came out and they changed my world. Saw them many times including Maine Road (amazing) & Knebworth (not so much). Noel Gallagher was the reason I and countless others picked up a guitar & wanted to write but just as importantly, he was a gateway to so many other artists that I later loved like The Jam and The Verve – particularly their A Northern Soul album which is an astonishing record. Looking back I did quickly move on and broaden my palette through artists like Bjork and Tricky ( Maxinquaye remains one of my favourite albums) but I will forever be grateful to Noel for opening the gate.

When did you start to learn a musical instrument?

I was quite late to start, around 17-18 years of age. I was always obsessive about music, more than perhaps my peers but really until Noel G came along, I never believed it was something you could do.

Were you in bands prior to narcissus taking shape?

I wasn’t but Chris had been in a couple such as That Uncertain Feeling and The Rain Band.

How did narcissus come to be?

The potted history version is that I had written a few songs and had recorded them really crudely on a 4-track machine so was definitely thinking about wanting to do something but really didn’t know how to nor have the balls to do anything. Then for reasons unknown I answered a kind of lonely musicians ad in a local paper which Chris James (drums) had placed that was exactly what I had in mind. We met up at Night & Day Cafe and bonded over a shared love of DJ Shadow – Entroducing is a seminal album for us both. We exchanged our song ideas, Chris’s were much more formed as he is the production and programming brains, then we eventually swelled to a 4-piece and set about recording and gigging.

You had quite a bit of success back in the mid noughties. Can you run through what happened?

We landed a publishing deal through a demo we had leaked. We also put a single out on an indie label in Manchester called Northern Ambition which was home to Stephen Fretwell’s and Omertà’s early output. Then as we were recording our album the publishing company collapsed and took all our momentum with it. Fortunately, as we had used our advance to buy equipment we were able to finish recording the album but by the time we had finished it we had lost all our impetus and were creatively spent – hence why it subsequently spent a decade on a shelf!

The success and maybe the audience your music deserved didn’t quite happen at that time. Why do you think that was?

Just circumstances really with the collapse of the publishing deal and not having a manager back then to direct traffic and guide you through the bumps in the road. One of the big differences now is gathering a team around us, especially our manager and having some early adopters championing us. I do look back on that time fondly though and we did some great gigs like the double header we did at D-Percussion festival during a blazing hot day before legging it across town to play band on the wall the same night.

What have you been up to since those heady days?

Births, deaths & marriages! We all went our separate ways and had families, cats & dogs! Lost a few people and gained a few people along the way. I’ve continued to write over the years & occasionally surfaced with other projects, Lee Mulvey (bass) has continued to play live with other bands & Chris has cut his djaying chops at 42nd Street nightclub in Manchester which seems to be one of the last defenders of the indie/alternative cause.

Can you please go into detail of how the band has now got back together?

Serendipity really. Without knowing each other to start with, both my partner and Lee’s partner shared an office space in Manchester for a while and got chatting by the water cooler, realising how they were connected. From there Lee and I got chatting again and talked about putting the album out on-line as it was 10 years on. We then got back in touch with everyone and listened to the album to see if it stood up and were pleasantly surprised to hear how well it had held up – it sounds like it was recorded yesterday. Maybe we were ahead of our time! From there we dotted a couple of tracks to a few people and it quickly seemed to attract the attention of a few industry types and most importantly it triggered our managers involvement who has since been instrumental in making us active again and getting people to take notice. Long may that continue!

Your album is now going to get a long await release. What do you think the listener will get to hear?

A genuinely eclectic body of songs. The parish of narcissus is a broad church and the album reflects our record collections and influences which are wide and varied – there are guitars, filthy bass lines, cinematic choruses, electronica, trip-hop, strings and synths. It has its tender moments too but it is unashamedly big in scope. Lyrically it deals with life’s big themes and hopefully captures some universal truths.

What musical influences do you have at the moment?

Too many to mention all but where we seem to interface as a band includes influences like Radiohead, DJ Shadow, Portishead, Chicago House Music, New Order, Doves, Elbow et al and we are obviously aware our city’s musical heritage. Lyrically I am in awe of artists like Nick Cave and Guy Garvey who are exquisite in their command of language. It is a level of lyric writing that I aspire to reach but I am under no illusions that I am not fit to lace their boots!

Are you planning on going out on tour?

We are open minded at present as to what interesting live opportunities might come up and we have a few gigs lined up including having just announced that we are playing the CWNine Fringe event in May with Ryan Jarvis. We were always a band that preferred to put on our own events wherever possible, playing in gallery spaces and nightclubs so hopefully, we can carry on in that vein.

Finally, what’s on your turntables at present?

We are as excited as anyone about The Slow Readers Club rise so their new material has been a constant of late – we’re really inspired by the way they have gone about their business and do feel an affinity with them musically. Can’t wait for the album, what we’ve heard so far is amazing!

Other notable albums would be LCD’s American Dream, the Bicep album, Damn by Kendrick and I love the stuff I’ve heard recently from David Byrne, George Fitzgerald, Gaz Coombes and Karen O.

narcissus can be found via their Facebook and Twitter pages. Tickets for their Northwich gig can be purchased here.

All words by Matt Mead. More of Matt’s writing can be found via his Louder Than War author archive page. Main photo (above) by Paul Husband whose website is here: Paul Husband Photography, Twitter and Facebook