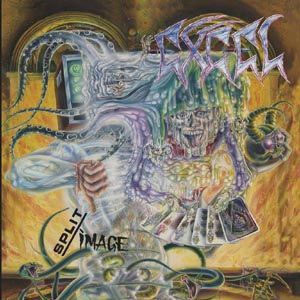 Bridging the gap between metal and hardcore, US legends in their own right Excel reissue their first solo release from back in ’87. Louder Than War’s Mike Dines reviews.

As noted in Flex! U.S. Hardcore Discography, Excel were ‘fast powerful skate core with strong speed metal influence; still firmly in the hardcore camp regarding vocals and production.’ It concludes, ‘if you’re into Suicidal Tendencies in their phase between hardcore and metal you’re going to like this a lot.’ Formed in 1983 by Dan Clements and Adam Siegel, Excel harked from a West Coast punk/hardcore scene built on eclecticism and experimentation, with a list of bands including The Germs, Flipper, Circle Jerks and the Dead Kennedys, to highlight such a diversity.

It may come as no surprise, therefore that a band such as Excel would continue in this vein; and especially in their first solo album release Split Image, released in 1987. Drawing further from Welcome to Venice (1985), a record shared with the likes of Suicidal Tendencies, Beowülf and No Mercy, Excel continued to be instrumental in the crossover between hardcore, metal and thrash. Influenced by a musical diversity that spans Black Sabbath, Circle Jerks, Motörhead and Black Flag the band soon moved beyond merely sitting in the shadows of bands such as the Suicidal Tendencies, and instead began carving their own creative, musical niche. As vocalist Clements once said to Noisecreep journalist Mike Gitter, ‘as much as I loved the Suicidal music and aesthetic, it wasn’t us. We’re from there, but we never adopted any image or ideal but our own.’

Remastered by Brad Boatright, the Southern Lord re-issue of Split Image is accompanied a large amount of extra material. Excel’s tracks from Venice are included, as are the demos Personal Onslaught (1985) and Refuse to Quit (1986). A booklet consisting of photos from the period, as well as a poster, is also included, completing a useful documentation of this influential band. Yet the real impact of this reissue is more aesthetic and historic than just a re-mastering process. As seen in the stylistic shift of a band such as Discharge, the very idea of a crossover between punk, metal and thrash has always been a contentious issue. For many, these genres have roots in very different places, and more importantly perhaps, many believe them to encompass different spaces of artistic and subcultural expression.

Yet to merely divide a genre into many differing unrelated styles can often provide a too-simplistic commentary on why and how styles such as metal, thrash and hardcore fused together the way they did. It kind of misses the point of looking at youth culture in an organic, empowering way. As such, Excel’s reissuing of Split Image may provide an erstwhile excuse to revisit that time when hardcore thrash bands were beginning to emerge. As Clements notes, ‘it was a really innocent time. We never said we were a thrash band, a punk band or a metal band. We didn’t know or care what we wanted to be. We wanted Excel’s music to speak for itself, which I think it has.’