Grant Hart: A Handful of Husker Du Songs and Mu (review from There’s Something Hard In There)

By Andy and Cat

This final installment of our two-day, Husker Du double shot features Grant Hart — a man and his guitar — at Seattle’s Funhouse last night.

Last time we saw him was in November 2009 at the High Dive, where he plugged in his acoustic-electric and dug into his songbook of Husker, Nova Mob and solo tunes to a small weeknight crowd.

Just a few Husker tunes that evening, but this time, Friday night with an electric six-string in hand, he unloaded about 10, including “Green Eyes,” “You’re a Soldier,” “Pink Turns to Blue” and, of course, “Don’t Wanna Know if You are Lonely,” which has sold extremely well recently backed with Green Day’s version on a special-edition 45 single. 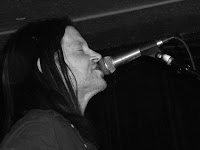 With another intimate crowd on hand, he also went Nova Mob-style with “Last Days of Pompeii” and the set-closer “Little Miss Information.” Of the solo tunes, “You’re the Reflection of the Moon on the Water,” “Now that You Know Me” and the huge-sounding “2541” hit the spot.

“2541” is especially noteworthy, because it’s the could-have-been-Husker song that Bob Mould didn’t think fit the band’s format, and it started a rift with Hart that never dissolved, according to his new book. Last night, Hart shone with that song when he passionately sang, “You put our names on the mailbox, and I put everything else in the past; It was the first place we had to ourselves, I didn’t know it would be the last … 2541, big windows to let in the sun.”

Just a man and his guitar, and an appreciative crowd. Simple format, sterling results. 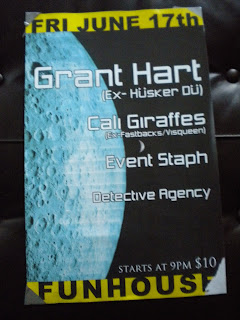