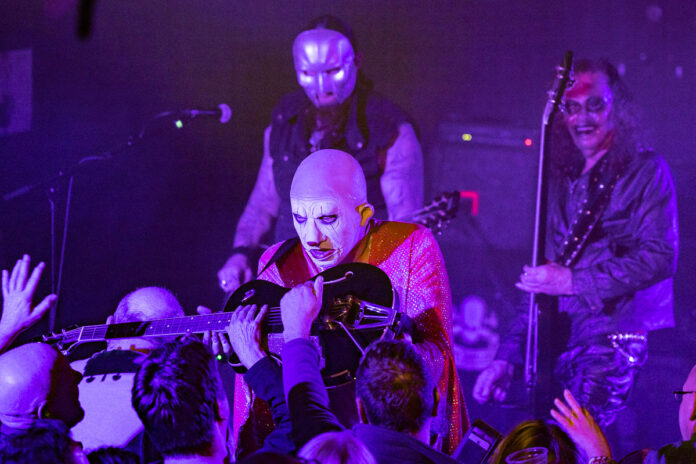 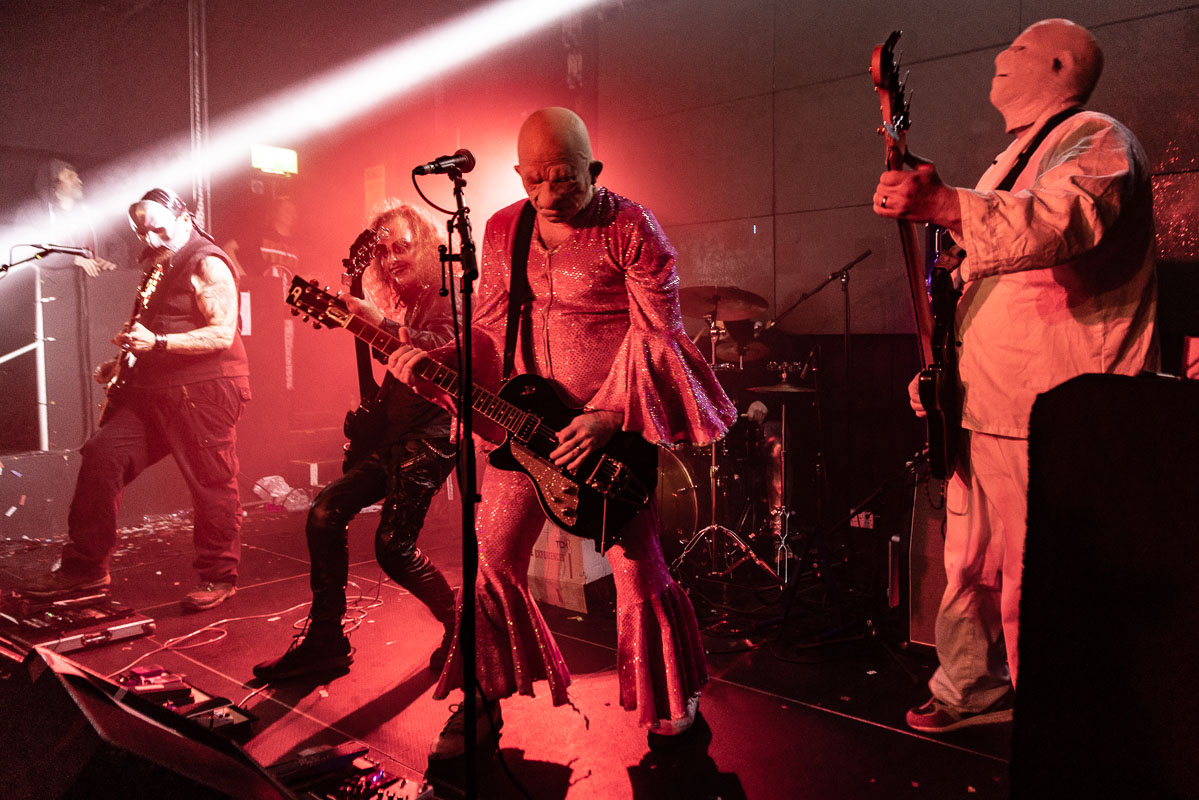 Andy Brown heads down to The Warehouse in Leeds to catch Evil Blizzard and Discharge. Two unique takes on punk. He shares his thoughts for Louder Than War.

There’s a flock of studded black jackets and at least one Mohican outside the longstanding Leeds venue, The Warehouse. Discharge have just rolled into town and the hardcore faithful are out in force. Inside there’s someone wearing a large, rubber horse head and a pink Hawaiian skirt. If the presence of black jackets and sewn-on band patches herald the arrival of Discharge then rubber horse heads can only mean one thing; Evil Blizzard are back in West Yorkshire. Despite their obvious differences, there’s certainly plenty of crossover here. Both bands fly the punk flag in their own unique way and both are guaranteed to make one hell of a racket.

The entire room is bathed in a smoky red hue, giving The Warehouse a distinctly hellish vibe. Appropriately enough, Discharge kick things off with the utterly blistering The Blood Runs Red. Dave “Proper Caution” Bridgwood piles into his drum kit, setting a satisfyingly relentless pace for the rest of the set. I swear the band don’t stop to take a single breath for the first three songs and, even then, it’s incredibly brief. That distinctive ‘D-beat’ propels every two-minute blast into the stratosphere. They’ve gone through a lot of line-up changes but these Stoke-on-Trent punk legends have been around in one form or another since 1977. It’s quite clear that nothing can stop Discharge. 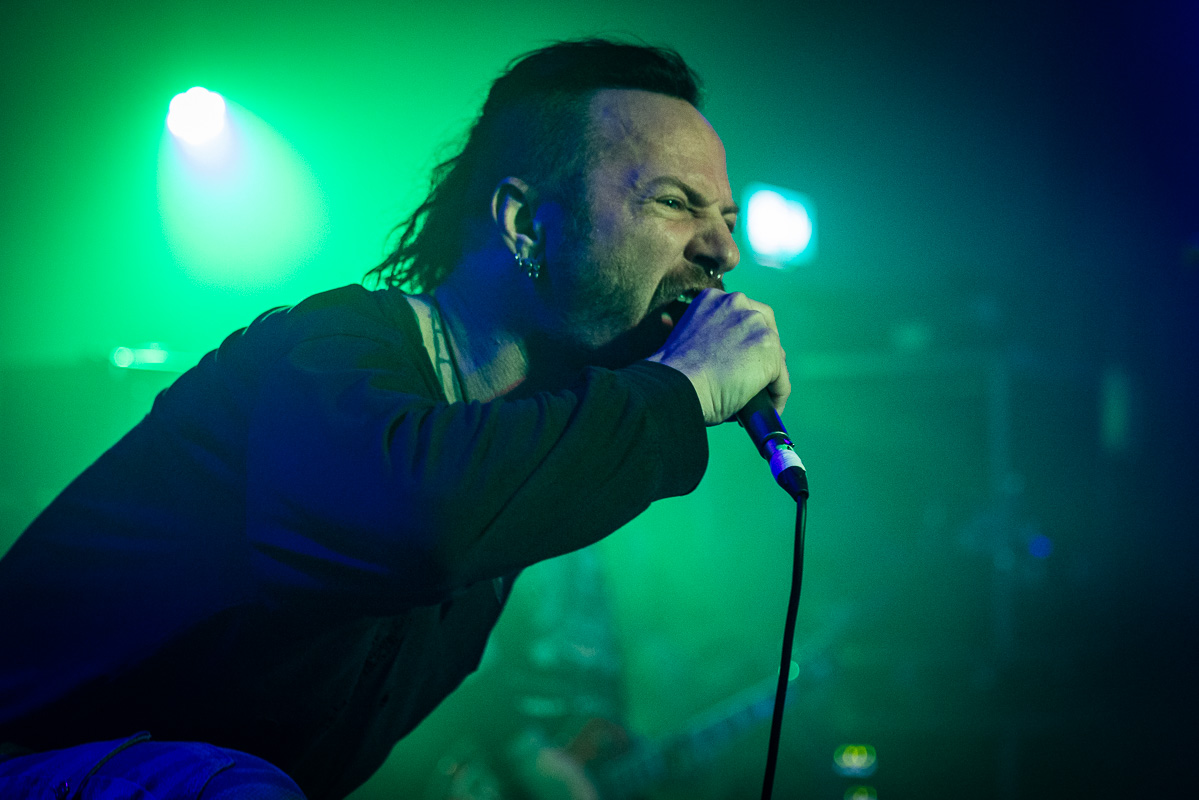 Vocalist since 2014, Jeff “JJ” Janiak prowls the stage like a man possessed. “Not long now, we might be living in it,” he tells us before the band plough into a fierce A Hell On Earth. A suitable soundtrack to the last few years, perhaps? Protest And Survive is a passionate call-to-action with a powerful reminder, “it’s up to us to change that course!”. Songs are pulled from across the band’s career yet the themes couldn’t be more relevant. War, corruption and the power of protest. Having said that, when have these themes not been relevant? The world’s a fucked up place and Discharge aren’t about to close their eyes. Thankfully, they’re here to drag us through the mire.

The band’s style is a potent mix of Motörhead thrash and Crass-level confrontation. With one foot in metal and one foot in hardcore punk, Discharge know a thing or two about kicking ass. “Get your trousers off Leeds!” yells Terry “Tezz” Roberts with a grin as they break out the brilliant anti-authoritarian anthem, Ain’t No Feeble Bastard. The intensity is admirably unforgiving throughout. The classics come thick and extremely fast. State Violence State Control, Hatebomb and the highly pertinent War Is Hell all hit like a ten-tonne truck. Finally, they drag us to the depths of hell with the superb The Possibility Of Life’s Destruction. “Keep going!” shouts a particularly eager fan, “keep fucking going!” What an incredible set. 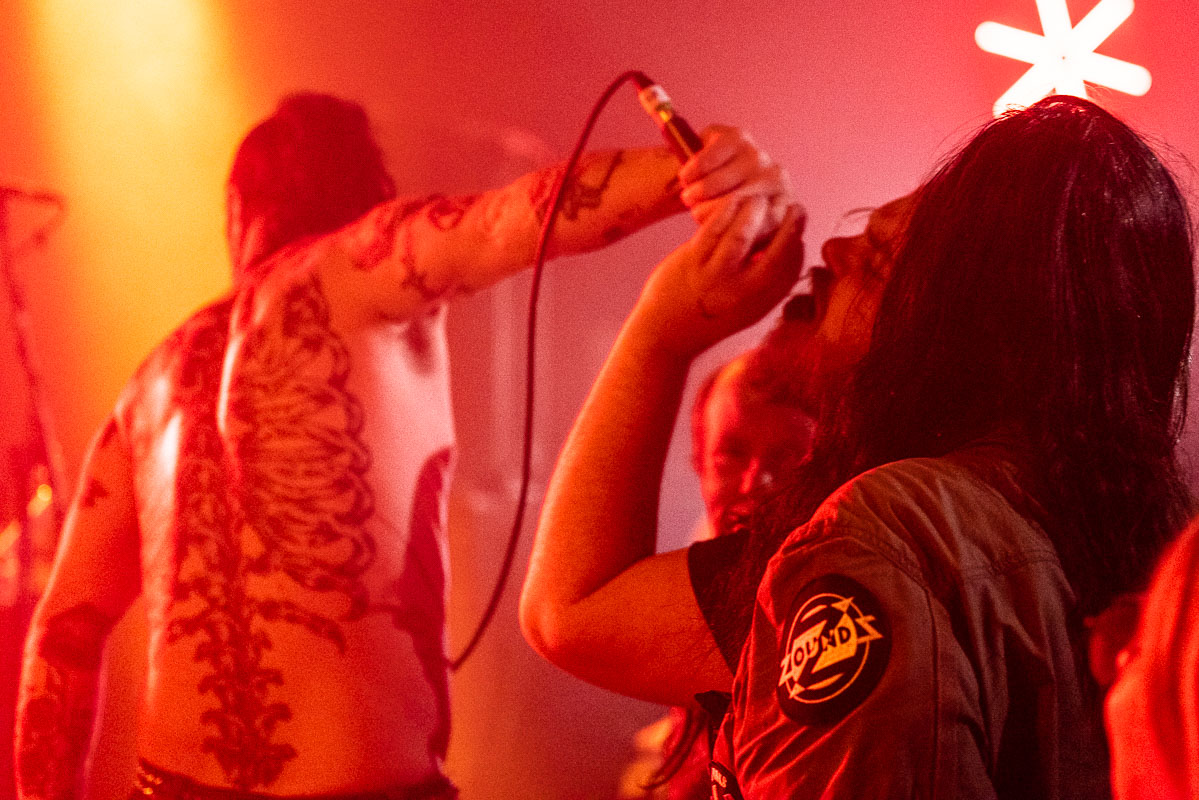 There’s someone dressed like a cross between the Pope and Leatherface (the right honourable, Odd Bill Cardinal Guillermo) standing to the side of the stage. Like some hellish hype man, he’s getting the assembled crowd to boo as loudly as they can, holding up signs for Boris Johnson, Putin and Evil Blizzard. It’s fair to say that Preston’s premier punks have a unique relationship with their fans. “You’re shit” someone gleefully shouts as the six band members make their way to the stage. It might not be the traditional warm welcome but for the Blizz, this is akin to the warmest greeting imaginable. Just think of it like a pantomime but with twisted, psych-punk tunes instead of family-friendly laughs and mildly risqué humour. OK, maybe keep the risqué humour.

Tonight’s line-up of masked rapscallions consists of Side (drums/ vocals), Filthy Dirty (guitar/ vocals), Blizzpig (synth), Prowler (bass), Stomper (bass) and the newest member of the unholy congregation, Fleshcrawl (bass). It’s like an identity parade of wayward, masked bassists up there. For the uninitiated, Evil Blizzard like to dress to impress. Every member has a wonderfully grotesque mask while Filthy Dirty gets the added bonus of a rather fancy, glam-rock inspired pink bodysuit. I can’t imagine it’s particularly clean though. 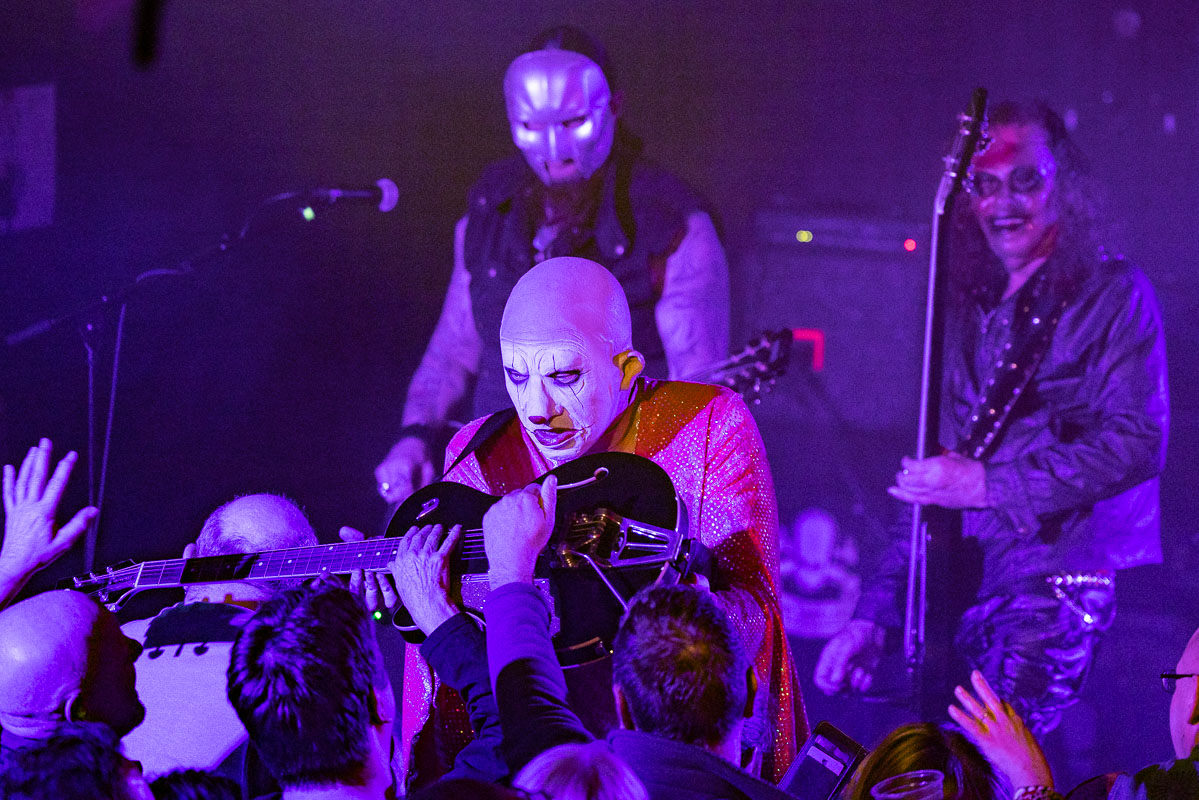 Sacrifice gets things off to a suitably bludgeoning start as that looming, doom-laden bass takes over. The band’s hefty sonic assault pulls the entire room into an inescapable black hole of sound. I mean this, of course, in the best possible way. Evil Blizzard are one hell of a live experience. The friendly animosity continues throughout, with jeers and boos following every song. “Yeah, yeah” sneers Filthy Dirty at one point, “shut up”. It’s an unusual tradition but an easy one to decode. This is punk rock love and it has to be more hygienic than all that spitting, right?

Gargantuan waves of propulsive psychedelia and perverse punk pummel us into happy submission. Unleash The Misery feels suitably cathartic while Like A God reaches a level of intense madness I haven’t experienced in ages. Feeling frisky, they treat us to a humongous and horrendously heavy psychedelic jam. A song, they tell us, they haven’t even written. All excess thoughts are wiped clean from my mind as I surrender to the all-consuming cacophony. Slimy Creatures is as vicious and fun as always, while Are You Evil? remains the band’s dark-hearted anthem. “Shall we all just go to the pub?” offers Filthy Dirty at one point, “it’s quite early, we could have a decent Saturday night at this rate” 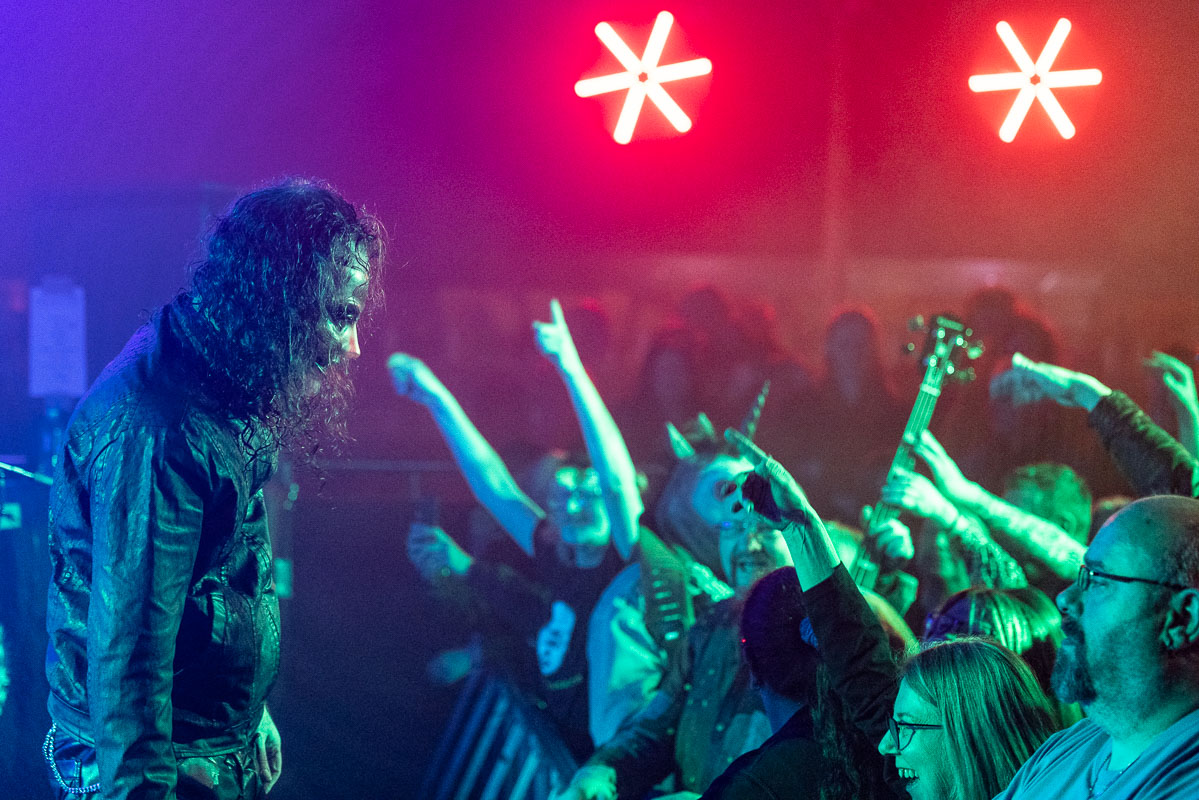 The chaos reaches its zenith during the repetitive hypnosis of (Open Up The) Red Box. Filthy Dirty jumps into the crowd and proceeds to play from the steps at the back of the room. Prowler takes this opportunity to do some crowd surfing and is promptly replaced on stage by an audience member dressed in a clown mask, face mask and a cape. A brilliantly chaotic conclusion to the night. It’s the kind of joyously cathartic, wholly ridiculous and thoroughly thrilling rock ‘n’ roll ride that only Evil Blizzard can provide.