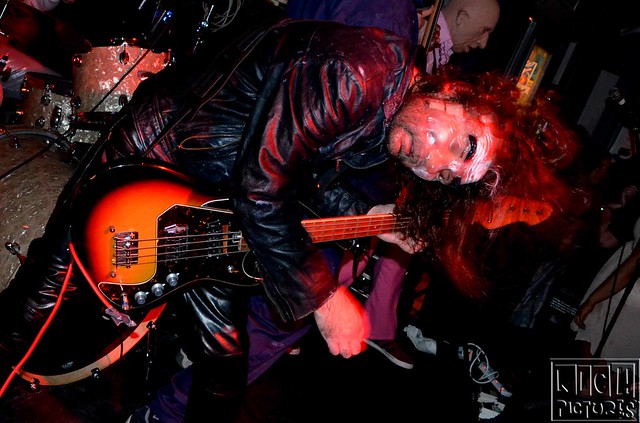 “…I look around, I see a lot of new faces, which means a lot of you have been breaking the first two rules of Fight Club…” – Tyler Durden.

Tyler Durden would assign Evil Blizzard to project mayhem in a heartbeat…and this morning, somewhere in Preston- a minicab driver is huddled up in a heap, sobbing….but I’m getting ahead of things
Last night – the sound – it tore through the walls, which were, dripping with sweat. The venue was packed to the gills; and I was hanging off the top stair, appropriate really, the top stair is where I used to stand as a kid at my parents house to catch glimpses of whatever horror film I wasn’t allowed to watch.

Stomper has just had his scalp removed in the style of Ray Liotta in Ridley Scott’s ‘Hannibal’… and ‘Feed the Flames’ continues. Except tonight it sounds like they’ve miked up the Monaco Grand Prix. The staircase is shaking, and so is the sea of heads…so are all the buttons on my shirt – I haven’t heard noises like this outside of a S W A N S gig.

“Are You Evil” (or Evol?) smashes into the room and could be the clarion call for today’s modern, nihilistic freak. It damn well should be everybody’s song of the year – shout it at your neighbour, shout it down the telephone – shout it at your bank manager and show him a picture of the Blizzpig… “…on a long enough timeline, the survival rate for everyone drops to zero.” Cornelius

‘Whalebomb’ is Nagasaki times 100 tonight; somebody has fainted and been taken outside. Was it the volume? Was it Blizzpig? Was it the latest addition; Grumps? (we know who he is, right readers?). Evil Blizzard’s sound has expanded – the texture of the multi layered assault is sharper than ever and the vocals sound even more foreboding for the added clarity – they are one step closer to world domination folks.

Filthydirty – armed with babies head Theremin, has left the building (thankewverymuchh) and decided to take the gig onto the streets – and scare a local minicab driver..
Back inside Kav and Prowler are being pinned against the amps as the crowd surge forwards – his royal majesty, the Blizzpig stands astride the centre of the stage – waiting…to the right Stomper and Grumps are dealing with their own separate stage invasion and in the middle of this maelstrom – Side’s percussive assault continues. Filthydirty reappears in the audience (he must have access to a portal) and the inevitable collapse begins. Like a head on collision between Goya and the Chapman Brothers – bodies are sprawled across the stage, Evil Blizzard are pinned to the floor by their fans; is this love…..or just a damn sexy war? Preston may never know what just hit it…..